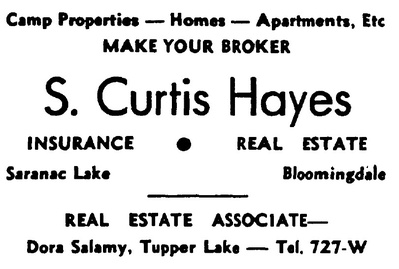 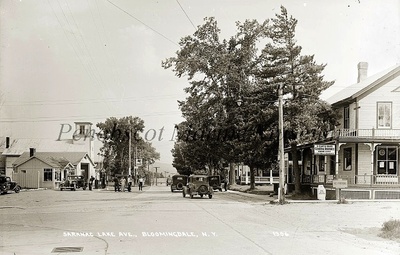 Sanford Curtis Hayes was an insurance and real estate broker, and a former mayor of Bloomingdale. He was the son of Sanford C. Hayes.  He was a World War II veteran.

Sanford Curtis Hayes, II, insurance and real estate broker and a former mayor of Bloomingdale, died last night at his home in Bloomingdale after a long illness.

Mr. Hayes was born in Paul Smith's on Feb. 12, 1909, a son of Sanford and Gertrude McCaffrey Hayes. He had been in the insurance and real estate business for 27 years, starting in Bloomingdale in 1935 and later moving the business office to Saranac Lake. He was Bloomingdale's mayor from 1956 to 1960. He was a graduate of local schools and attended Albany Business College.

Mr. Hayes served in the Army in World War II and was a member of the American Legion and the AMVETS. He also was an Elks Club member.

Friends may call at Mr. Hayes' home where Elks will conduct services at 8 o'clock this evening. The funeral will be at 2 p. m. Saturday, also at Mr. Hayes' home with the Rev. W. James Erdmann, pastor of the Saranac Lake Presbyterian Church, officiating. Interment will take place in Brookside Cemetery after the funeral.