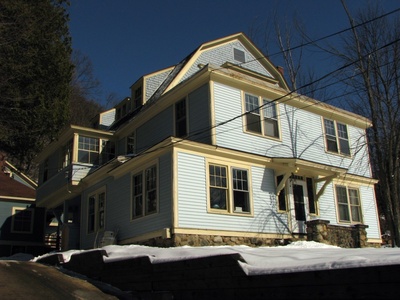 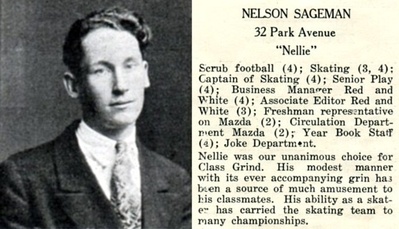 Nelson Sageman in the 1927 Canaras

Other information: The oldest house in Cottage Row, the Sageman Cottage is a Dutch Colonial Revival house built for William H. Moore. The Bartok Cottage was added to the rear of the property in 1905. Béla Bartók's son, Peter Bartók states that his father stayed in the Sageman Cottage (not the bungalow behind the house) in 1943. 1

Sam and Mary Edelberg operated the cottage from 1911 to 1923, when they sold the property to Margaret Sageman.

Helen Bell was a tray girl at the Sageman in the 1940s, and Alfred Larsen was a patient, one of Saranac Lake's Norwegian Sailors. Larson recovered and went back to sea, and twenty years later, they were married.

The Sageman Cottage was one of seven cottages in Saranac Lake that had contracts with the Veterans Administration for care of tubercular veterans.

According to the 1916 TB Directory, the Edelberg Cottage, run by Mrs. Sam Edelberg, had room for 15 patients, had three cure porches and charged $12-18 per week.

Phil Gallos says "The photo you've got here is of the house that my grandmother cured in sometime in the early 1940s. Its exterior has changed quite a bit over the years, but much of the interior is intact. My grandmother (maternal) would split time between here and Manhattan after she got well. When my mother decided it was time to get me out of the city, Nana was living in Saranac Lake again, so up we came. My mother later went to work for Trudeau Institute doing TB research (she was a microbiologist)."

An article title "Cottage Calls," about the patients at the Sageman Cottage, appeared in The Guild News in September 1942.

From the Adirondack Daily Enterprise, October 28, 1982

If someone were to ask me what my grandmother, Victoria Gil, had in common with the famous, 20th century composer, Bela Bartok, I could give at least two answers. They were both born in eastern Europe. And they both received the care of Margaret Cavanaugh Bradley Sageman.

My grandmother had a room in the big cure cottage at 32 Park Avenue. This is the building that became famous as the Sageman Cottage and is still often referred to as such even today, 34 years after its conversion to an apartment house.

Bartok had a room in the "bungalow" at 30 Park Avenue. Tucked into a rear corner of the lot and almost hidden by the much larger "cottage", this was the Sageman home, and Bartok was the only patient ever to have the privilege to be quartered there.

The bungalow also was the birthplace of Irving "Bud" Edelberg, local attorney. Bud Edelberg's parents, Sam and Mary, acquired the property at 30-32 Park Avenue in 1910. They took up residence in the bungalow and operated a nursing cottage at number 32. Mary Edelberg was not a nurse herself, but she retained a full and competent staff, and she laid the foundation for the cottage's renown. The Edelbergs, according to Bud Edelberg, catered to "people of means who could pay their way."

However, before a decade passed, Sam and Mary Edelberg came to the conclusion that they did not want to raise their three children in such close proximity to people infected with tuberculosis. Ultimately, they would decide to sell the properties.

In the meantime, George Sageman, a construction engineer for the Sante Fe Railroad, learned that he had contracted T.B., and he and his wife, Margaret, a nurse, moved from Chicago to Saranac Lake in 1917 so that George could cure at Trudeau Sanatorium.

In 1920, the Edelbergs sold 30 and 32 Park Avenue to the Sagemans, and Margaret and George moved into the Bungalow, which they enlarged and remodeled.

George went to work for Branch and Callanan where, through the years, he was involved in the construction of the Alpine and Saranac Hotels, the Pontiac Theater, and the Agora Theater at the Lake Placid Club, among other major structures.

Margaret found her fulfillment running the Sageman cottage, a private sanatorium which had a reputation for excellence and became a place of choice for discerning and cultured patients, whether they were Scandinavian sailors or South American aristocrats.

An advertisement for the cottage in the May, 1931, issue of the Journal of the Outdoor Life, reads "A Real home for the health seeker. Situated on the side of Pisgah Mountain — picturesque scenery. Easy access to town, rooms with or without private porches. Home cooked meals. Rates $21 to $35 weekly. Tray service included."

These rates were approximately double or triple those at Trudeau where there was a policy of providing care to people who could not afford the private sanatorium.

Margaret Sageman was an astute businesswoman as well as a dedicated nurse. In the late 1940s, she perceived that the advent of the "wonder drugs" like streptomycin would profoundly reduce the need for the fresh-air and bedrest cure. In 1948, she closed 32 Park Avenue as a private sanatorium and converted the buildings to apartments.

She was the first major cure cottage operator in Saranac Lake to do such a thing, and it was a move that, reportedly, was strongly opposed by some because of the impact it might have upon the rest of the community. But Margaret Sageman was not afraid to face the future, and she was not to be dissuaded. She went ahead with her plans, and, it has been said, "the rest followed like dominoes."

In 1954, Trudeau Sanatorium discharged its last patient, Larry Doyle. A major chapter in the history of medicine ended, and Saranac Lake entered a new and uncertain era.

The Sageman Cottage and the bungalow, now owned by Greg Clark, have become involved in a curious twist of fate. In becoming an apartment house, 32 Park Avenue lost a second-floor front cure porch along with a large, ground-floor front porch where Bud Edelberg remembers seeing ten to twelve patients at a time reclining on their cure chairs. Further, a number of other porches were enclosed. Because of these changes the Sageman Cottage is not eligible for consideration for inclusion in the National Register of Historic Places. 2 The bungalow, because it is essentially intact and because it housed such an illustrious person, is eligible for consideration even though it was never operated as a cure cottage and gave shelter to only one patient, Bela Bartok.

Ultimately, both the Sageman Cottage and the Béla Bartók Cottage were accepted as contributing elements of the Cottage Row Historic District.

Our thanks to Rita Sageman and Bud Edelberg for providing information for this article. 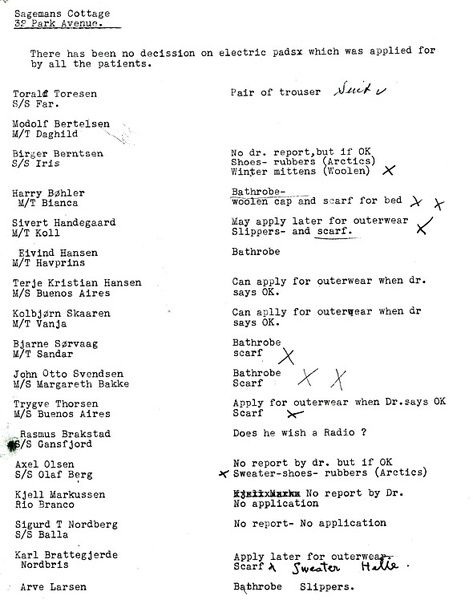 List of donations from the Social Welfare Committee for Norwegian Seamen in America in New York. For context, see Stony Wold Sanatorium. Courtesy of Natalie Leduc. From a list found in the vault of Pine Ridge Cemetery, headed "Birthdates of Norwegian Patients in Saranac Lake and Gabriels, N.Y." Undated, but probably c. 1943.

1. Letter exchange with Historic Saranac Lake, 2012.
2. This proved not to be the case— the cottage is listed on the Register