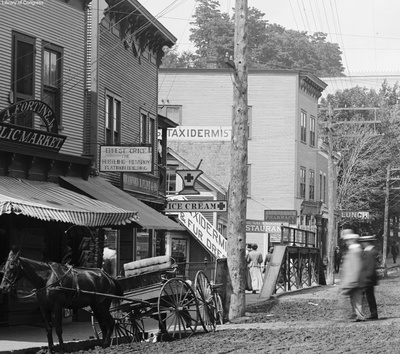 The Sagendorf Restaurant sign can be seen just above the old iron Broadway Bridge", and the restaurant appears to have shared space with a taxidermist. In this very foreshortened view, it is hard to recognize that the Saranac River runs between Flint's Pharmacy and the Sagendorf, and Dorsey Street is on its other side before the three-story (Adirondack Pharmacy) and two-story buildings beyond (Detroit Publishing Co. For the photograph of which this is a detail, see Broadway, just past the table) Address: 33 Broadway

Other information: The Sagendorf Restaurant was run by Walter Sagendorf and his wife Jennie some time before they acquired the Berkeley House in 1913. The restaurant appears in a 1909 photograph of Broadway, between the Saranac River and Dorsey Street, in recent years the site of Morgan's 11, reopened by Jack Decker as Edgewater Pizza in late 2012. Most recently, after heavy renovations, this building became the site of the Temming Art Studio the Fiddlehead Bistro in 2017.