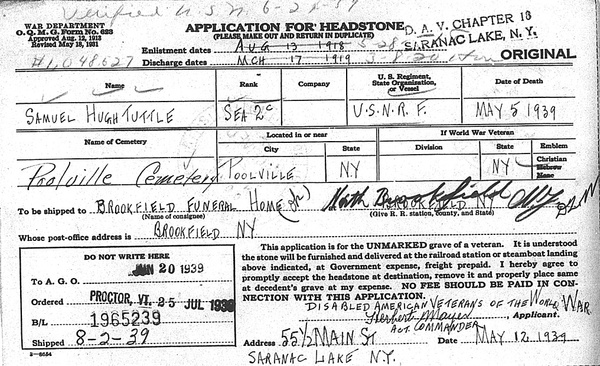 Samuel Hugh Tuttle was a Seaman 2nd Class and disabled veteran of World War I (information from Application for Veterans Headstone). He lived at the Perez Cottage behind the Linwood Cottage on Main Street.

Mr. Tuttle was born in Brookfield. He was a World War veteran, and since that time has been in poor health and has been in a government hospital at Saranac Lake until recently. His death came suddenly Friday morning.

He is survived, by his wife at Saranac Lake and his step-mother in Waterville.

The funeral was held at his home in Waterville Sunday at 2 p. m., in charge of Harry Mumbulo of Brookfield, with the Rev. Lemert, rector of the Episcopal Church at Waterville, officiating. Burial at Poolville in the family plot.