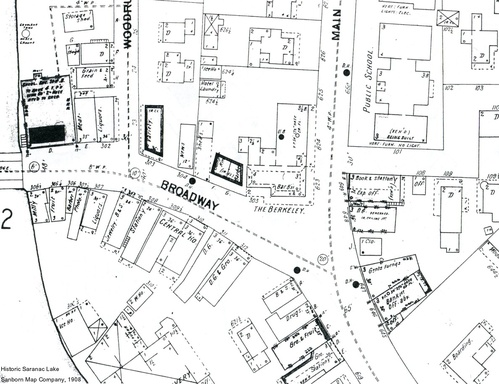 The Sanborn map of the Berkeley Square area, 1908 Sanborn Maps, made by the Sanborn Map Company of Pelham, New York, beginning in 1867, were created for assessing fire insurance liability in urbanized areas in the United States; they include detailed information regarding town and building information. Maps for Saranac Lake exist for 1895, 1899, 1903, 1908, 1916, 1924, 1931, 1945 and 1961; the Adirondack Research Room of the Saranac Lake Free Library has copies.

The maps are quite detailed for the areas that they cover, showing in outline the shape of each structure, and indicating the number of floors of each section, including porches. However, they never cover the entire village. Areas covered, by year, include: