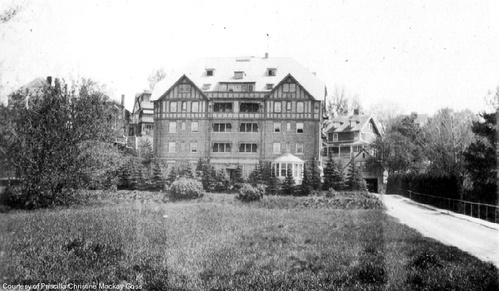 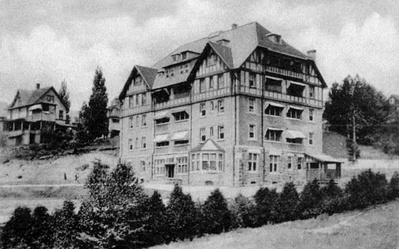 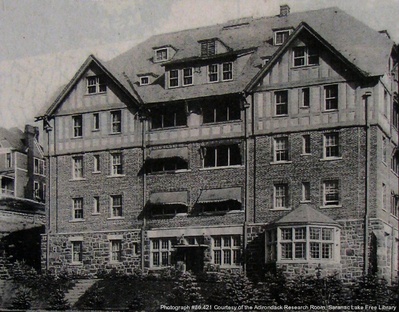 The Santanoni was the most luxurious apartment building in Saranac Lake.  It was built by William H. Scopes.  Starting in the 1950s, it was known as the Santanoni Hotel.  In the late 1960s it served as dormitory space for North Country Community College.

The fourth and fifth stories, along with the magnificent slate roof, were destroyed by a fire on April 13, 1973. The Santanoni has been rehabilitated and in 2009 houses the offices of the Adirondack Explorer, its owners, and a number of rental apartments.

Among its tenants were Kathleen McFarlane Hammond, Christy Mathewson and Elizabeth Comstock, whose daughter, Elizabeth Mooney, wrote of her mother's cure in In the Shadow of the White Plague.  Silent film actor Valentín Parera cured there for eight months in 1941. It is possible that the great actress and acting teacher Stella Adler cured at the Santanoni.

The Santanoni Hotel Will Not Be Closed

Many times during the last few years there have been rumors in Saranac Lake to the effect that the Santanoni apartment hotel had been sold or was going to close.

This wide-spread report was was answered today by owner William H. Scopes.

Mr. Hay has been acting manager of the apartment sanatorium for several months and with The Santanoni all his working life. Mr. Humpstone and Dr. Plass entered the merger to assure themselves the comforts that have been available in the past. They have both resided at The Santanoni for a number of years.

Mrs. Ethel Knuckey died Saturday at the Santanoni Apartments where she had made her home for the last three years. Funeral services were held at 3:30 p.m. yesterday at the Fortune Funeral Home. Rev. Ernest B. Mounsey officiated.

The widow of Lorenzo Knuckey, Mrs. Knuckey came here from Buenos Aires for her health. She was born in New London, Iowa. Survivors include a daughter, Mrs. Elizabeth Prettyman, of Saranac Lake,. and Mrs. Ava Mehler, of New London.

The Santanoni hotel in Saranac Lake, offered to Franklin county for an infirmary, fails to meet state specifications, Supervisor Charles Finch of Fort Covington reported this week after attending a meeting of Franklin county supervisors at Saranac Lake Monday. The hotel which is still in operation and is owned by a Mr. Hay of Huntingdon, Que., who went there originally as a dish washer, was offered to the county at a very attractive price and is an attractive piece of property.

Mrs. John S. Ridenour, of Washington, D, C. a former resident , has arrived to visit her son-in-law and daughter, Mr. and Mrs. Arthur Wareham. While here for a month she will be at the Santanoni Hotel, 36 Church Street.

The Saranac Lake Village treasurer was authorized last night to deed to the village nine foreclosed properties including the Santanoni Hotel, the lot upon which the old St. Regis Hotel used to stand, and the Saranac Lake Troy Laundry.

The village board took action upon a list by of properties presented by the treasurer, Irene Roventini. In all cases, the village's right to take possession followed expiration of redemption time in the payment of two years of back taxes.

It was pointed out that the problem child of the nine may be the Santanoni Hotel owned by the Santanoni Apartments Co. at 34 Church St.  Heating expenses for the huge building are considerable. It was hoped that Franklin County would share the expenses with the village as it has done in a previous case…

We Have to Eat, Too!

Approximately 180 North Country Community College students, some from within the two-county district, and some from other parts of the State, will be “living in.” This means, of course, that private facilities in the area of Saranac Lake are having to be utilized for housing.

Housing of students in a community college cannot be handled by the college according to State University of New York regulations. Therefore, private agencies must handle this problem. And private agencies in Saranac Lake have risen to the occasion. The Hotel Berkeley in downtown Saranac Lake has been refurbished to accommodate about 60 women students; the Santanoni Hotel, presently being renovated and refurbished, will this year be able to accommodate only about 30 to 35 men students. (Next year, with nearly twice the students as this first year, the Santanoni will hopefully be able to accommodate up to 130 men students.)

In addition, several motels and private homes are accommodating students. One motel, for instance, will house 24 men students. One private home will have 14 men students. Food service will be available at the college where Bill Williams and his staff will be serving three meals a day, plus snacks in between, to any student, faculty and staff who wish to patronize it. Three meals on Saturdays and two meals on Sundays will be served in the new Student Center, which can seat up to 80 persons at a time.

Part-time students wishing to have meals at the college may also participate.

Meal tickets on either a 5-day or a 7-day-a-week basis may be purchased.

Cost of meals is being kept as low as possible, but the quality and variety will be as high as possible. Students wishing to eat elsewhere, of course, will have no obligation at the college. 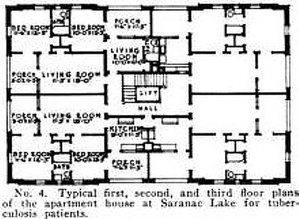