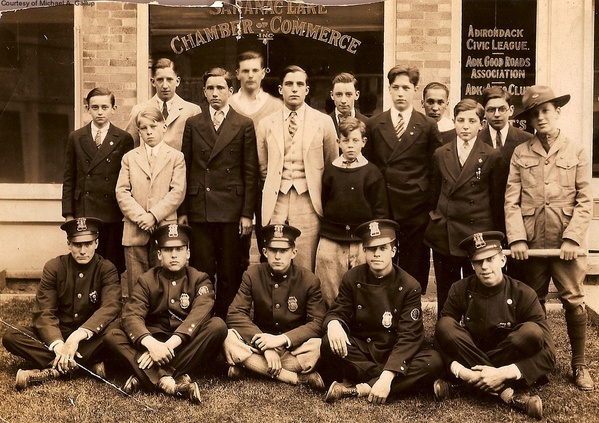 Group photo at the Chamber of Commerce (undated)

In June 2009, the Saranac Lake Area Chamber of Commerce moved its office from the Harrietstown Town Hall, to the North Elba Town House.

The Saranac Lake Chamber of Commerce first appears in newspaper accounts in 1921. 1

The lowest bids on a model bungalow to be erected by the Saranac Lake Chamber of Commerce have been made public and the total cost is $5,655.00. The first bungalow is to be finished this year.

Plans to put the sport of professional ice skating on a firm basis by the means of the formation of an established circuit are under way at the present time under the direction Manager L. B. Judson, of the Saranac Lake Chamber of Commerce.

The model bungalow erected by the Saranac Lake Chamber of Commerce, has been sold before the paint was fairly dry to Edward W. Cady, formerly of Washington, D. C, for $7,7700. It is called Petrova Villa because Madame Petrova, famous actress, wielded the silver shovel which broke ground for the structure last summer and furnished one of the rooms. The beginning of the excavation was made by 50 or more Saranac Lake business men. A plan for the erection modest homes up to $3,500 each with payments spread over 12 years is now being developed in that village.

A movement for a through route over Whiteface mountain under the plan for a scenic road to that famous Adirondack peak was initiated at a special meeting last week of the board of directors of the Saranac Lake Chamber of Commerce.

At the same time action was taken to urge Governor Smith to sign the Sargent water power bills protecting Saranac Lake, active opposition being reported as having developed during the past week.

Fred T. Tremble, Dr. Frank E. Kendall and Frank Wetmore Smith were appointed a committee on the Whiteface road survey, for which $15,000 was appropriated by the state legislature.

Saranac Lake will seek to gain favorable consideration for a plan to have the road, which will follow a route from Wilmington up the mountain, also continue down the other side to Franklin Falls by way of a road now in existence but in poor repair. This would make the highway to the summit much nearer for Saranac Lake residents and visitors as well as those in Bloomingdale and Gabriels, Paul Smith's and points south and west.

The message to Governor Smith follows: "The directors of Saranac Lake Chamber of Commerce urge that you sign the two bills Nos. 1889 Introductory 1645 to create a temporary commission; 1890 Introductory 1648 to amend the conservation law in relation to the creation of river regulating districts."

The tourist bureau, which the chamber maintained, is to be continued by the village at least until the close of the touring season next month.

E. W. Cady, Jr., secretary of the chamber, has been serving for some time without salary, it is reported. Quarters occupied by the chamber office have been occupied rent free through the courtesy of Walter Sagendorf, owner of the building.

The Saranac Lake chamber of commerce will be continued as an organization, even though its office will be closed.

While the Lake Placid Olympic committee is endeavoring to get up-to-the-minute information as to the number of guests this resort can accommodate at the time of the Third Olympic Winter games of 1932, nearby communities have not been idle in completing their plans for assisting Lake Placid to take care of the throng of International visitors two years hence.

A committee of the Saranac Lake chamber of commerce conducted the survey, which shows that substantial assistance can be rendered by that resort to Lake Placid in its efforts to provide adequate housing facilities for all who will come to view the great international contests in 1932.

Plans for housing the thousands of contestants and visitors at the Third Olympic Winter Games of 1932 in Lake Placid will be discussed by Judge Thomas A. Leahy, president of the Lake Placid chamber of commerce, before the semi-annual dinner meeting1 of the Saranac Lake chamber of commerce next Monday night at Hotel Saranac.

Announcement of Judge Leahy's talk was made yesterday by Samuel Edelberg, president of the Saranac Lake chamber of commerce.

Ralph B. Leonard was elected president of the Saranac Lake chamber of commerce by vote of directors at a meeting in the Harrietstown town hall.

Mr. Leonard, a brother of F. S. Leonard of Lake Placid, takes the position after being a director of the chamber of commerce almost without interruption since the beginning of the organization in 1921.

THE SARANAC LAKE CHAMBER OF COMMMERCE today became the first small business in the village providing unemployment insurance protection for its employees under the extended cover-age provisions of the State Unemployment Insurance Law going into effect Jan. 1. This year the law covering unemployment has been extended to any firm employing three or more workers even for one day. In 1957 the coverage will be extended to include firms with two or more employees. Some 50,000 firms with 150,000 employees come under coverage this year. Shown handing a poster the Chamber will display, tax reporting forms and instructions to Chamber secretary Joseph Munn, (right), is L.F. Fobare, payroll examiner of the State Labor Department's Division of Employment.

By JAMES M.ODATO SARANAC LAKE - The some 385 members of the Saranac Lake Area Chamber of Commerce are to be asked to contribute money to meet increased operational expenses and cost of living jumps.

Letters are to be mailed to chamber members asking for the donations.

The directors voted to ask chamber members for an assessment of 50 per cent of their dues. Members who pay $40 a year in dues, are to be asked to contribute $20, for example.

"If the chamber pays all bills we have, we will be totally out of 1977-1978 funds by the end of February." J. Sue Dyer, executive director said. The chamber's fiscal year is June through June. The chamber owes $6,944, Feinberg said. Of this amount, $3,233 are debts remaining from last year's budget, he said.

Feinberg said the National Sleddog Races sponsored by the chamber in January cost about $6,580, although final figures are not yet tabulated. He said the three-year supply of Saranac Lake brochures are nearly gone after less than a year, and the chamber should pay about $3,500 for more.

Richard Boyea, a chamber director, was appointed to a committee to investigate selling "Olympic Country" posters to bring in more income. The chamber paid $1,500 for the posters and has not been selling them.

J. Dyer said the I Love New York Winter Festival is another reason chamber funds are drained. She said increased telephone use, mailing, and distributing brochures have increased in response to requests for information. The director also agreed to meet with the village trustees board and tell them of budget needs.

Glenn Odone said the directors also should ask the village board to hire a sports director.

The directors agreed the chamber staff spends too much time on sports related events. They mentioned the sled dog races, bathtub races, pentathalon, and President Robert G. MacIntire said the chamber will be asked to promote the 1978 National Hydroplane Races this August if a contract between the village and M.B. Olympic Regions Promotions is not signed.

He said a sports council is needed. Howard Munn, a former director, had tried to organize , a council but his attempts drew very little public interest.

"The cost to run those hydroplane races is going to make the chamber budget look like running a Sunday event," Mrs. Dyer said

The directors also voted to petition the Franklin County Legislature to increase the maximum funding cut-off the village can provide the chamber to $50,000. The village is giving the chamber $13,000, and the maximum cutoff is $15,000, Dyer said.

She said events such as the 1978 Hydroplane Races, the Fireman's Convention, and the Can-Am Rugby Tournament this summer will bring the promotion funds coming from the village past the legal maximum. The funds total $6,400, she said.

In other action, Mrs. Dyer said parking is the biggest problem in hosting the I Love New York Winter Festival, Feb. 8-12 in Saranac Lake and Lake Placid.

She said Lake Placid will ban traffic on Saturday and Sunday during its World Sprint Speed Skating and World Four-Man Bobsled events. She said school buses are to shuttle spectators to parking areas at Holiday Harbor, the Lake Placid Club Resort, and the Horseshoe grounds.

She said the Saranac Lake Senior Citizens club has donated its new mini-bus to shuttle spectators during the event. A bus driver is needed, she said. Parking areas are being planned and must be found, she said.

She said Lake Placid and Saranac Lake have booked all rooms, except a few "isolated rooms," and that tourists are being referred to Tupper Lake for lodging.

In response to the directors interested in buying a tour boat from Swiss Marine, Inc. Odone was asked to check the mortgage and insurance costs. Swiss Marine no longer wants its boat, and offered it to the chamber for $5,500. The chamber directors believe it could be profitable to run tours.

The directors also voted to put to bid concession rights for the Winter Carnival. It will allow individuals to sell food at the chamber information booth now set up on River Street.

"Years, ago, I camped in a concrete lean-to located on a cliff on an island in Lake Saranac. I recall that the lean-to had a plaque on the wall on which was inscribed a rather beautiful quotation. Time has erased the words from my memory. I wonder if you would he good enough to send me the text of that quotation together with the name of the author thereof."