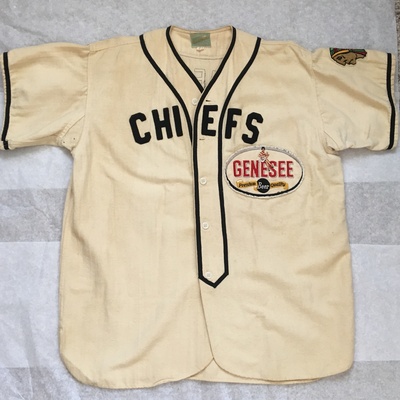 IN DAYS OF OLD

The Saranac Lake Chiefs, once the greatest attraction on Sunday afternoons in Saranac Lake and one of the finest baseball teams around, is no more than a memory today, some seven or eight years after the death of the local baseball team.

To some area baseball buffs the death of the Chiefs was a great blow to the Giant and Dodger diehards when New York and Brooklyn left the big City for the West Coast.

The old rivalries with Gabriels and Bloomingdale were a part of summer sports in Saranac Lake and when the teams evaporated it left a big vacancy in the sports schedule during the summer months. 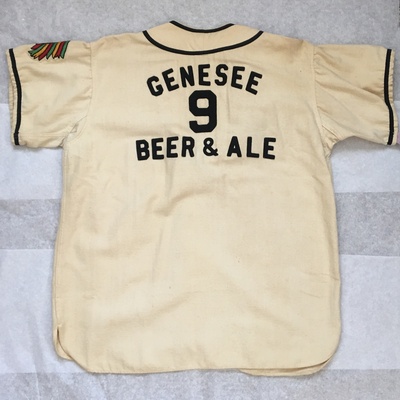 Warren Schlickenrieder, Sr.'s Saranac Lake Chiefs jersey from the 1950s (back view). Historic Saranac Lake Collection, TCR # 390. Courtesy of Lynn Sullivan.Much the same fate has come to the rest of the Champlain Valley and Adirondack League towns who once made up the great amateur circuits of Northern New York. Much of the Chiefs' story lies in the old papers and in searching through editions back in the early 50s one can come upon some accounts of old Chiefs games.

In one summer edition of 1953 was found a picture of the Chiefs that year with their player-manager Rube Skeels. Art that time the Saranac Lake nine led the Adirondack League with a 6-1 record and sported an 11-4 slate overall.

Ray Tarbox was the Chiefs big hurler with either Linus Fobare, Bobby Avrarri, or Rube Skeels making up the other half of the battery.

Ray Edgley and Billy Root shared second base duties and whoever got the call was generally manager Skeels' lead-off man. Tim Sweet, Bucky Dwyer and Warren Schlickenrieder made up the rest of the infield.

Schlick, Clyde Baker and Joe Farley are the only three still going on the local level as they made the switch to Softball. Schlick plays for the Marine Midland, Baker for E. John's, and Farley for the lone Lake Placid team, the Tik Tok.

The Chiefs continued after 1953 having their ups and downs which eventually led them to their death at the turn of the decade. Rumors have it that the major league expansion led to the downfall of the Chiefs dynasty.

The Chiefs will play their first home game of the new season at Municipal Field on Memorial Day, May 30th. A CV League team, not known at this time will oppose the locals.

Manager "Rube" Skeels stated that his starting hurler for the opener in Tupper has not yet been picked, but that his choice will be made from one of these four: Joe Farley, Butler Sullivan, Ronny Martelle and "Jacker" Jandrew.

The hustling mentor of the tribe also listed as his possible starting line-up to include "Fat" Fobare— catching, Bob Muncil—first base, Davey Munn on second, Timmy Sweet at short, and either Sammy Durham or Dud Branch will be at third.

Billy Root, classy shortstop, will arrive Memorial Day to join the team for the summer.

A new Scoreboard, donated by the HI-LAND BEVERAGE Company will be installed for the opening game.

Other CV Loop openers pit Peru at Au Sable Forks; Lyon Mountain at Plattsburg; Chateaugay at Morrisinville. A clarification statement was read at the last league meeting that the Chateaugay Ponies are definitely in the CV League this year. A younger Legion team will represent them in the St. Lawrence Valley League.

The Chiefs will hold practice tonight with an important meeting to follow. Practice time is 6 p.m.

Despite the fine relief hurling of Ronny Martelle the Saranac Lake Chiefs bowed to a good AuSable Forks Genesees nine on the Municipal Field, 4-2, in a twilight seven inning non-league contest last night.

Bugs Pratt started on the mound for the Chiefs and pitched nohit ball until the fourth inning when Sam Bally and Charlie Dragoon opened the frame with consecutive singles but Pratt worked out of the stanza holding the Genesees to one run.

Pratt apparently lost his early innings form and was tagged for three runs in the fifth so Ron Martelle came in to hurl with one out and one man on. Martelle retired the next eight batters, holding the Forks nine hitless for the remainder of the game.

Billy Root made his first appearance for the Chiefs since his ankle injury in June and, batting for Ray Edgely in the seventh, he worked Bobby Glode for one of three bases on balls given to the local club.

AuSable scored the first of the non-league affair in the fourth canto as Sam Baily led off with the first hit of the ball game and with Urgil Votraw running for Baily, Charlie Dragoon blasted a long single to deep right center scoring the lanky Votraw from first.

The Chiefs came back in their half of the fourth as Clyde Baker blasted a sharp double off the softball backstop in left field and moved to third on a wild pitch. Bez Kentile got the locals' second hit as he rapped a single into left field to score Baker and knot the game at 1-1.

The visitors' scoring surge came in the fatal fifth when Glode leading off worked his rival Pratt for a walk and went to second on a fielder's choice. Glode was then put out in a run-down between second and third just before Red Preston walked.

Urgil Votraw, Genesees' centerfielder, laced a hard, perfect double play ball at Dave Munn, second-sacker, but the pill took a high, unexpected hop and bounced over Munn's head for a single and tallied Bombard from second with the tie-breaking run.

A wild pitch by Pratt and Munn's error of Baily's grounder accounted for the final runs for the Genesees and set the stage for Martelle's superb relief permance.

Never admitting defeat, the locals registered their second and final run in the sixth. Butler Sullivan was passed and raced to second on Glode's pickoff error, scampered down to third on a wild pitch and scored as Red Preston overthrew the initial bag after he fielded Wayne Sweet's hot ground ball sensationally.

BILLY ROOT BACK IN GAME

The Chiefs made a futile attempt to pull the game out of the fire in the seventh as Billy Root walked. Bob Stringer ran for Root and was forced out at second although Bucky Roche was awarded first on Baily's miscue. Manager Rube Skeels, pinch hiting for Martelle, slashed a long double to center putting men on second and third but Sullivan popped out to Charlie Dragoon for the final out of the game, sending the Chiefs behind in the overall series with the Genesees 3 games to 2. Some sparkling plays were made in the infield last night with both teams getting their share. Paul Savage, Forks third baseman, along with Clyde Baker, Bill Ellithorpe and Ray Edgely of the Chiefs, turned in some defensive dandies and powerful arm of Urgil Votraw was a definte help to AuSable in the local' seventh loss in twenty-one starts.

The Bloomingdale Firemen will play host to the Chiefs tonight in Bloomingdale on the Youth Commission field. Saranac Lake holds a 2-1 edge in the intervillage series.

The Saranac Lake Chiefs, in abrupt about face of last week's superlative fielding, have only themselves to blame for yesterday's loss to fifth-place Saranac Hollow in Clayburg, 7-2. Only one run was earned for the Hollow, a home run blast in the bottom of the sixth by hard-hitting Red Dubray. The Chiefs had 14 errors. They out-hit the home club with ten hits to five.

Soutpaw Leon LaFave started on the mound for the Chiefs and now has a 3-4 record for the season. He was relieved in the eighth inning by Arnie Dunn. Ralph Coryer, fresh from his 3-1 victory over second place Lyon Mountain last week, took advantage of the Chiefs' bad day to win his second straight.

Dubray led the victorious Hollow in hitting with three including his home run and a triple. Germaine and Chase were the only other batters to hit. Bob Stringer continued his .400 hitting with two. Warren Schlickenrieder slipped with only one hit, dropping to a .352 average.

Fred Woods continued his hot hitting streak for seven straight games, with a single in the fifth inning. Stringer, John Carpenter and Billy Root led the losers- with two hits each. Carpenter and Schlickenrieder knocked in the only runs of the game for the Chiefs in the seventh inning.

Next week the Chiefs meet the Bloomingdale Firemen here at the Municipal Field in Saranac Lake. The Chiefs' record is now 6-5...