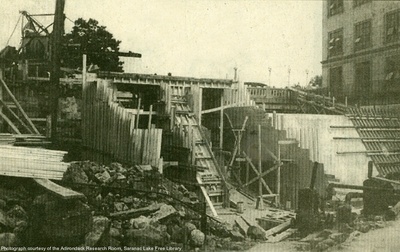 Rebuilding the Lake Flower Main Street dam with WPA funds, 1938. The photograph is looking east towards Lake Flower from behind what was then the Saranac Lake Village Offices at 10 Main Street. Adirondack Daily Enterprise, November 29, 1997 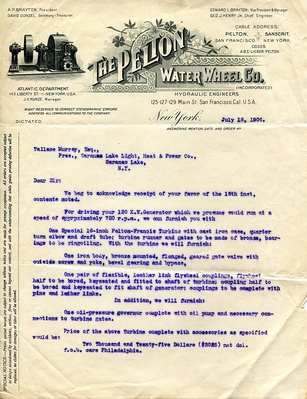 An estimate for a new turbine for the electric plant, dated 1906 The Saranac Lake Electric Company was formed on September 20, 1894, by Orlando Blood, Wallace Murray, and Orville Morse. They purchased the site of Pliny Miller's Sawmill and Gristmill, installed two new water wheels and two generators, and erected poles and strung wires. In 1907, the company was bought by Paul Smiths as part of the Paul Smith's Electric Light and Power and Railroad Company.

An electric light company has been organized at Saranac Lake, and the streets, residences and public buildings of that most enterprising of villages will soon be illuminated by electricity.

"Water over the dam" is an old expression that may have new meaning and importance in Saranac Lake since the former Paul Smiths water-control system on Main St. represents the only flood barrier between the Saranac Lakes and Plattsburgh in the Saranac River system.

The Village Board has taken preliminary steps to bring complete responsibility for safe and constant water flow directly to the State of New York and will petition for a water control gate and wheel valves to eliminate the cumbersome three way (ownership, control and maintenance) system now in effect.

The dam itself is apparently now owned by the village though an expenditure of $10,000 was made by Paul Smiths Electric Light, Power & Railroad Company towards its modernization in 1938 when the WPA completely rebuilt the entire structure.

Ownership is one thing and the regulatory mandate another. The New York State Department of Environmental Conservation is currently taking the responsibility for maintaining safe water levels that will keep peace among the property owners both above and below the dam.

The third tine in the pitchfork of dissension is the maintenance factor which falls directly on the Village of Saranac Lake.

THE SYSTEM used in the dam is so archaic and time consuming that the employees who are responsible for the water flow have long wondered why the WPA didn't install the proper and logical means to control the river —valves and an iron water gate —at the time they were involved with the project.

The pressure of water on the dam and the 4-by-6 inch timbers which are set in a slot, ten on each side, is so great in the spring that a danger exists to the men who must take the timbers out and put them back with pike poles. They stand on frozen and ice-crusted concrete over a roaring flume sometimes for as long as an hour and a half each time the water is regulated.

Usually three or four men are needed to properly execute the maneuver in a fairly safe manner. The 9 1/2-foot timbers are expendable. Each one costs $10 before it is treated and drilled for use. Ice or floating logs can smash them and tear them loose. Water action eventually weakens the squared logs and only the new ones can be trusted at the bottom of the sluiceway.

The months of January, February. March and April are key periods in water control and, of course, the most hazardous to the village employees. If a man is killed doing his job for the village, it would involve costly lawsuits in all probability when the hazards are so obvious and correctable.

THE THREE men most involved are Tom Carrol, Ray Willette and Tony Crisham. Thev agree that it isn't the most pleasant cold weather pastime. Village manager Gerald Oxford feels that it would be a wonderful thing if the system were brought up to date. He feels that in the long run much would be saved in both time and replacement costs.

The water flow has also invoked court action when in 1972 and 1973 the water flooded Dew Drop Morgan's restaurant below the dam and the Beardsley Apartments above the dam. The national flood insurance program is one alternative to the continued threat of unregulated waters or flash flood conditions which are rare in the Adirondack, but not unheard of.

The water behind the Paul Smiths dam is approximately 20 feet deep and the timbers are made of hemlock or fir. At the base, heavier 10-by 10 logs provide a stronger footing.

The state is vitally concerned with its waters and has encountered severe problems in the Wilmington, Keene and Jay area where massive ice floes and flooding have cost hundreds of thousands of dollars. The waters of Adirondack streams have also threatened bridges and highways paralleling the water courses.

If Saranac Lake is successful in getting the state to install a water control gate operable by a single worker, it would be doing itself and the state a favor.

The present site on Main Street is part of an original 300-acre lot sold to Pliny Miller by John Thurman. Approximaiely half an acre of land and the water rights were later purchased by Augustine Branch and William Callanan.

Orlando Blood purchased the property from Branch and Callanan on September 20, 1894 and installed the first electrical generating equipment. Mr. Blood was joined in the enterprise by Wallace and Orville Morse to form the Saranac Lake Electric Company.

This company then sold to the Saranac Lake Light, Heat & Power Company on Dec. 30, 1897. Wallace Murray was president of the later company and on August 4, 1904 purchased and added the John H. Farrington lot.

This information was included in a letter from C. E. Pinelle, then manager of the company, to O. Blood, president of the company. There is a story concerning a sawmill on River Street where the Thomas Boat landing was recently torn down. This sawmill provided power for some electric lights in the homes near the mill.

According to the records, when the sawing was finished for the day the power belt was transferred to a generator and operated until 10 PM at which time the plant shut down.

On Jan. 17, 1966 the Paul Smiths Company merged with the Niagara Mohawk Power Corp.

The history of electricity in the Saranac Lake area is as interesting as it is complex. Hydropower works at the Lake Flower Dam were employed to generate electricity as far back as the 1890s, according to a history by Enterprise contributing writer John Duquette. A private partnership which became known as the Saranac Lake Light Heat and Power Company installed generators at the site and began selling, electricity to nearby village businesses and homes. But the Saranac Lake firm would soon face vigorous competition from nearby Paul Smiths. In 1905, Duquette wrote, the Paul Smiths Electric Light and Power Company was founded near St Regis Lake. The firm grew rapidly under the resort-owner's supervision. In 1906 Paul Smith's company completed the first all-electric railroad in the Adirondacks to ferry guests from the rail station in Lake Clear to the hotel in Paul Smiths. With an eye on the expanding Saranac Lake market, the company completed construction of impressive hydro works to generate power at Franklin Falls and Union Falls on the Saranac River. That same year Paul Smith's company purchased Saranac Lake Light company and strung transmission lines throughout the area finally assuming control of the Saranac Lake market. Paul Smith died in 1912.

His company soldiered on, however. By 1925 Paul Smiths was selling power not only to Saranac Lake-area customers but to the municipal systems in Lake Placid and Tupper Lake as well. In 1927 the company arguably reached its apogee as embodied by the modern, three-story office building it constructed astride the waterworks at the Lake Flower dam. The building is now owned by the village of Saranac Lake, which has embarked on a modest but controversial plan to use the old hydro flumes to generate electricity to power its new sewer plant.

Local hydro power wasn't enough to meet the growing needs of the Tri-Lakes, experts said. By 1938, the Paul Smiths company was buying power from outside the area from the New York State Electric and Gas Co. During World War II the generators at the Lake Flower hydro works were judged to be outdated and unnecessary and were scrapped for the war effort.

During the mid 1960s the electric lines and related infrastructure in the area needed a lot of work, requiring a substantial cash outlay. According to Howard Riley, mayor of Saranac Lake at the time, it was clear the Paul Smith's company wasn't financially able to make the necessary investment. Then, Niagara Mohawk made an offer and negotiations with Smith's successors for the purchase of the company got under way in 1964.

"We knew the system needed a lot of work. As I remember, we were glad that a buyer who could make the investment came along," Riley said recently. NiMo offered to lower rates in the village to sweeten the offer, but Riley said the rate issue didn't much factor into the decision to sell to the growing utility. Having been served by private electric companies for so long, Saranac Lake readily approved the NiMo takeover which was approved by state and federal regulators in 1965 and concluded in 1966. Niagara Mohawk continues to serve the village and outlying areas to this day, and still owns much of the old Paul Smith's. Co. property. The big building at the Lake Flower dam was sold to the village of Saranac Lake in 1986 for $25,000.