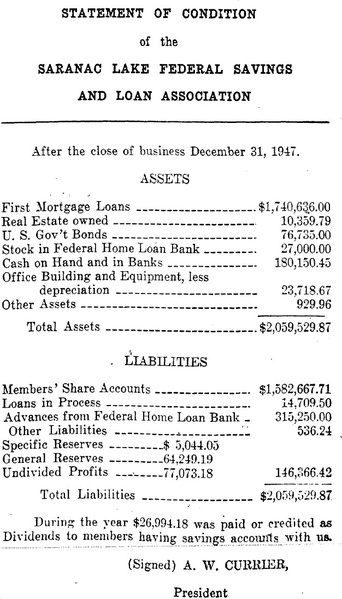 Adirondack Daily Enterprise, January 27, 1948 Saranac Lake Federal Savings and Loan Association was the successor to the Saranac Lake National Bank; it has in turn been succeeded by the Adirondack Bank.

In 1938, Fred Norman, a well known and wealthy farmer from Bloomingdale, led a reorganization effort that resulted in its formation. It continued to lease the old Saranac Lake National Bank space in the Haase Block until it bought the building in January, 1945, from Peter Augustus Adolphus S. Haase. In a subsequent reorganization, the Savings and Loan became the present [2011] Adirondack Bank.