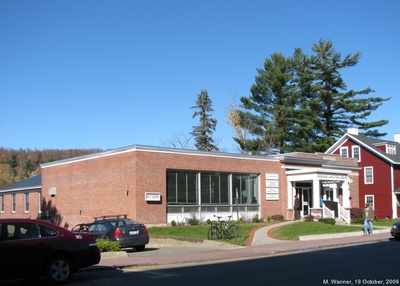 Saranac Lake Library, 2009. The old library, below, is just visible behind the new entrance. Dr. Lawrason Brown's residence is at far right. 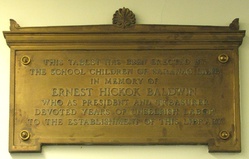 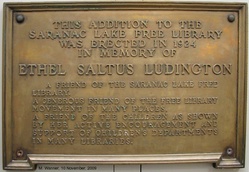 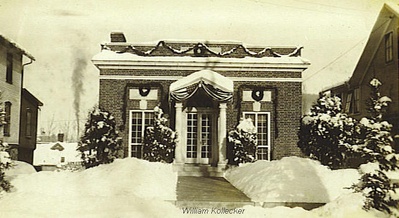 The first library in Saranac Lake was formed in Baker's Hotel, when Hillel Baker, brother of Milote Baker made his own collection of books available. This was followed by the building of the one-room, 400-book "Franklin County Library" on Main Street in 1880, an outgrowth of a reading club formed by Dr. Edward L. Trudeau. It was built for $700 on the site of the present Post Office Pharmacy, which was purchased for $25. Robert Louis Stevenson borrowed books there when he spent the winter of 1887/88 in Saranac Lake; in appreciation for their services, he donated an autographed copy of his book Gentlemen Friends, that is still in the library's collection.

Dr. Trudeau held the property in his name and acted as sole trustee of the library, which was supported mainly by members of St. Luke's Episcopal Church, and in time, Trudeau gave the property to the church. In 1891 the building was sold for $1600 and the collection, then numbering three thousand volumes, was moved to the new St. Luke's Parish House, and renamed the Adirondack Library.

After fifteen years, it became clear that the library's needs were growing beyond the church's ability to manage them, and in 1907, Saranac Lake Free Library was organized by George V. W. Duryee who raised sufficient funds to have a small brick building erected in its present location on land that he donated for the cause. It had a capacity of ten thousand volumes. The original library trustees were Duryee, William J. Callanan, Maurice Feustmann, E.H. Baldwin, and William H. Haase; all but Callanan had come to the village for their health. Baldwin agreed to serve as librarian, without salary.

A building fund was started, and a lot on Main Street was purchased for $2000 from Dr. Lawrason Brown, whose house and office was next door. The first paid librarian was William D. McNeil, hired in 1908, who became head librarian in 1909 when Dr. Baldwin resigned.

The new building was designed by Scopes and Feustmann and built, in 1910, by Branch and Callanan; it was one room, with a basement, and had room for 5,500 books.

The library has developed one of the finest collections of material on the Adirondacks in the nation in the Adirondack Research Room, assisting hundreds of researchers yearly.