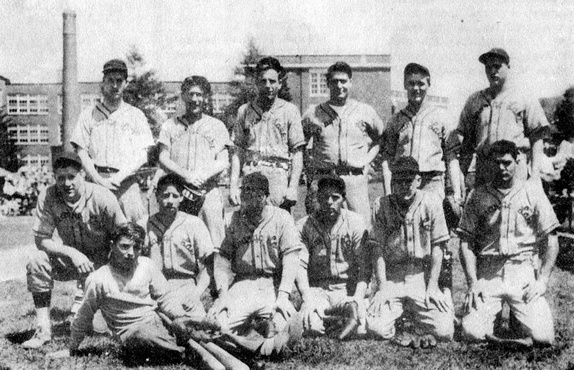 S.L. Baseball Team Is Accepted as Unit In Eight-Team League

Manager Tim Sweet, accompanied by Wally Brown, Nate Pratt and Clyde Baker, attended the first organization meeting of the Essex County league and the local Majestics were accepted as a part of the eight team league to operate this summer.

The new league is the outgrowth of what was the Essex-Franklin County Vets' league of last, year when two divisions operated with a playoff series between the sectional winners at the end of the season. This year's setup includes several of the teams representing both divisions of the other teams replacing clubs not considered strong enough to compete in the circuit this year.

Along with the Saranac Lake "Tics", Ticonderoga, Keene Valley, Crown Point, Mineville, Port Henry, Willsboro and Elizabethtown will make up the circuit this season, which will open on May 30th and run through a 14 game schedule with the playoff's scheduled to get under way September 6th or 7th.

Manager Sweet stated after the league meeting that he feels the new league will be as strong as any circuit in the North Country. He bases his belief on the fact that every team in the league was well represented last year and that every team has added considerable strength to their clubs for the coming season.

The Majestics appear to have added more power to their attack by the signing of Wayne Sweet, Stub Goodman, a fireball pitcher, Linus Fobare, a catcher, along with Reyell, O'Neil, Mierback and others Sweet for later in the week.

Hurley opened the scoring for the Pagemen when he walked in the opening inning, reached third on Page's single to right center and came home on Baker's misplay of Don Colby's ground ball to the box. Then with two away in the second they tallied three more on one single and a couple of Saranac Lake misplays. Bud Colby walked and went to second on Hurley's single, scoring on Page's line drive to left that Morgan misplayed. Both Hurley and Page tallied on Muncil's miscue at third.

Al Eccleston's error, a walk and a wild pitch by Colby gave the visitors a tally in the third and a pair of errors by Mader accounted for another Saranac Lake run in the fourth. The Pagemen added single counters in the third and sixth, with Billy Colby scoring from first on Mader's single and Hurley getting his third run of the game by singling in the sixth and coming home on Page's long double. Colby kayoed 9 via strikeouts and Swayze accounted for another pair, while Baker set down 4.

The play of the game was turned in by Bobble Jessmer, crack centerfielder of the locals, who took McGrain's long drive to deep centerfield over his shoulder and held Muncil on third with a rifle throw to home.

The two teams will meet again in a couple of weeks on the Saranac field.

1. It was a convention of the time to refer to a team by their manager's name with "men" appended; Lake Placid's manager was named Page.