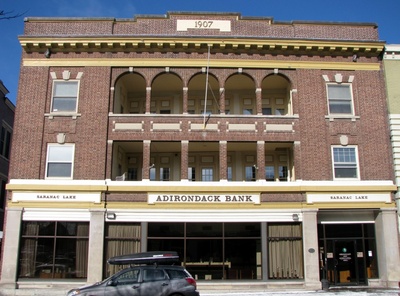 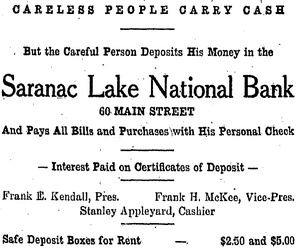 Saranac Lake National Bank was founded in 1906 by Dr. Frank E. Kendall and others; it was one of the earliest tenants of the Haase Block.

Ironically, less than a year after acquiring the Donaldson Block by foreclosure in November, 1937, the Saranac Lake National Bank went bankrupt, trying to finance the new Saranac Lake-Tupper Lake highway; the Federal Deposit Insurance Corporation took custody of the building in October, 1938. One of the members of its board, and its president when it collapsed, was Dr. Charles C. Trembley.

After the dissolution of the Saranac Lake National Bank in 1938, Fred Norman, a well known and wealthy farmer from Bloomingdale, seven miles to the north, led a reorganization effort that resulted in the formation of the Saranac Lake Federal Savings and Loan Association. This institution continued to lease the old Saranac Lake National Bank space in the Haase Block until it bought the building in January, 1945, from Peter Augustus Adolphus S. Haase. The Savings and Loan has since become the Adirondack Bank, in the same building.

The capital stock of the new institution is $50,000, the greater portion of which has been subscribed by local business men.

SARANAC LAKE — After 31 years of service to this village and surrounding territory, the Saranac Lake National Bank and Trust company closed its doors at the conclusion of Saturday's banking day. All unfinished business of the institution, together with its deposits, capital, etc., was taken over by the Adirondack National Bank that was recently granted permission to absorb the institution. Many of the employees of the closed institution will be employed by the Adirondack Bank.

Organized in Sept. 1907, the bank was first opened for business in November of that year. It was organized by Dr. Frank E. Kendall, who was its first president. He served until his death May 10, 1937. The presidency then was taken over by Max Cohen of this village, but relinquished shortly after to Dr. Charles C. Trembley who was vice-president for many years.