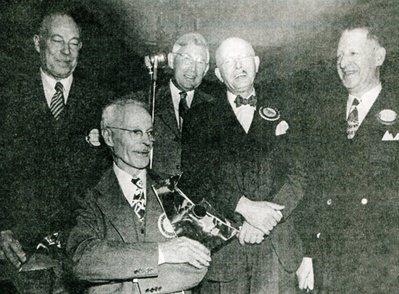 The Saranac Lake Rotary Club was founded in 1926.  R. M. Obenchain was the founding president of the club and John A. Galloway was president in 1930.  Dr. Francis B. Trudeau was president in 1935, and T. Jefferson Newbold served in 1948.  As an influential organization, the club is often addressed by those seeking to convince members of the advantages of a particular course of action: how best to market the area, how Paul Smiths College should be founded, whether the North Elba sections of Saranac Lake village should be made a part of Harrietstown instead.

Among other activities, they sponsored Boy Scout Troop 14 at Osgood Pond. 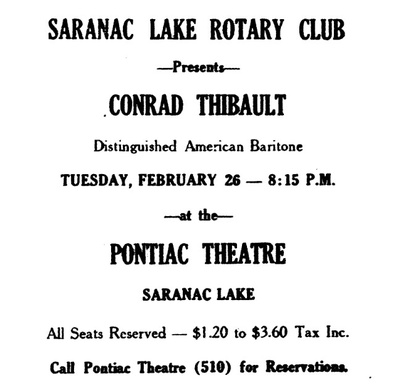 Initial steps in the organization of a Saranac Lake Rotary club have been taken with application for .a charter by a group of 20 business and professional men of the village organizers of the new body. R. M. Obenchain is president of the club there, Andrew W. Callanan, vice-president; A. W. Currier, treasurer and C. S. Barnet, secretary.

The question of Saranac Lake's development as a year around recreation center in preference to its continued growth as a health resort was strenuously debated at a meeting of the Saranac Lake Rotary Club last week.

At a meeting the week previous Ernest Wood, executive secretary of the Society for Control of Tuberculosis, appealed to the Rotarians to bear in mind that Saranac Lake's first duty was to the health seeker and stated that the very existence of the village depended on its catering to those who sought restoration of health in the high altitude of this village. Wood suggested that greater attention be paid to the development of the village along these lines rather than the promotion of the community as a recreation ground.

At Tuesday's meeting, Frank Miller, manager of the Hotel Saranac, took a stand for the development of Saranac Lake's abundant natural resources as a great playground. He said the village was entirely without means and equipment for attracting visitors and for gaining permanent residents who would seek diversion in all year round sports. Mr. Miller said the number of inquiries for winter sports was very large, but what few of these responded when they learned how little the village afforded for recreation purposes.

Ernest F. Gamache, secretary of the III Olympic Winter Games committee, addressed members of the Saranac Lake Rotary club at their regular luncheon session at Hotel Saranac on Tuesday of this week.

After outlining the status of the Games facilities and the progress being made in the construction of the Olympic arena, Mr. Gamache went on to tell of the varied sports program arranged for Lake Placid this winter that will insure visitors a full calendar of activities both before and after the Olympic Games.

“Lake Placid expects to have the longest and busiest winter season in its whole history,” the speaker said.

One of the primary matters before the Saranac Lake Rotarians was the matter of steps to assist in raising the balance of that village's $10,000 Olympic budget. Part of this amount has already been paid to the Lake Placid committee, it was stated. Lewis Graeves, a member of the III O. W. G. board of directors, is directing the drive to complete Saranac Lake's promised fund.

Saranac Lake business men were told by the speaker of the need for this assistance from Lake Placid's neighbor. He also outlined to his hearers many ways in which Saranac Lake business men could capitalize the Games by tying in their advertising and window displays with the Games and the other sports events to be staged at Lake Placid this winter.

“The III Olympic Winter Games are a North Country as well as a Lake Placid project. They will benefit this entire section of the Adirondacks” Mr. Gamache stated.

About 65 were at the Saranac meeting to hear the Lake Placid Olympic secretary.

More than a hundred presidents, secretaries and past district governors of the 28th district of Rotary International met at the auditorium of the Harrietstown town hall in Saranac Lake Monday morning for a two-day assembly. Members ot the Saranac Lake Club and clubs from adjacent communities augmented the opening session.

The first session was opened with songs at 9:30 o'clock. Following a roll call and introduction a message from Clinton R. Anderson, president of Rotary International was read. L. Dudley Field, district governor, then spoke on the “Functions of the District Assembly, Its Place and That of the Clubs in the Organization of Rotary International.”

There were two additional ad- dresses, one on “The Program of Rotary as Expressed Through the Aims and Objects Plan,” and an- other on “\Club Service as a Means of Fitting Men for Service.” Each address was followed by a discussion period. At noon the session was adjourned for lunch at the Hotel Saranac, where the assembly made its headquarters…

Visiting Rotarians and their wives were invited to tea Monday after- noon at Camp Intermission, on Lake Colby, as the guests of Mr. and Mrs. William Morris. A boat ride through the Saranac chain of lakes was enjoyed yesterday morning…

The Saranac Lake Rotary Club last Wednesday night entertained 100 poor children of that village with a Christmas dinner and the distribution of toys.

Eight Rotary Clubs and more than 200 members are expected to take part in an inter-city sports program arranged by members of the Saranac Lake Rotary Club for June 22. All points in Northern New York and one club from Montreal are expected for the events, which include golf, baseball, other athletic games and a dinner in the Hotel Saranac. The visitors will be entertained at the golf course of the Saranac Lake Golf Club.

The sports program will start at 1 o'clock. Dinner will be held at 6 o'clock. Women guests will also be entertained. A program is being drawn up for them and will include, golf, cards at the hotel or Saranac Golf Club and a boat ride through the Saranac Lake chain of lakes…

SARANAC LAKE - The Saranac Lake Rotary Club will be celebrating 75 years of service to the community with a Gala Celebration at Saranac Village at Will Rogers on the evening of Saturday, May 19.

The Saranac Lake Rotary Club received its charter from Rotary International on April 14, 1926 under the sponsorship of the Malone Rotary Club. The charter President was R. M. Obenchain who presided at the installation which was held at the Riverside Inn. After the construction of the Hotel Saranac, weekly meetings were held there in 1927 where they have been held ever since. Since its beginnings in 1926, the club has served the needs of Saranac Lake with a special focus on the youth of our community.

The club has been fortunate to have had many leaders of the community serving our club and the community over the years. Some of these past Rotarians include many notables such as R. M. Obenchain, Dr. Francis B. Trudeau, William Morris, Howard V. Littell, Tony Anderson, Irv Altman, Sam Edelberg, and Charles T. Cowan. The club has also been privileged to have had many well known speakers over the years such as Rotary International Founder Paul P. Harris, News Commentator Lowell Thomas and Henry Morgenthau, Jr., later to become President Franklin D. Roosevelt's Secretary of the Treasury.

This year, the Rotary Dancers performed at the Winter Carnival, marking 50 years of continuous performances since the first show in 1951 at the Pontiac Theater.

The Saranac Lake Rotary Club received Charter No. 2323 in 1926, only 21 years after the first Rotary Club was formed by founder Paul P. Harris in Chicago on Feb. 23, 1905. Rotary rapidly expanded and today Rotary International is comprised of nearly 30,000 clubs with close to 1.2 million members in 163 countries around the world. Rotary International is divided into 530 districts each governed by a District Governor.

The district which contains the Saranac Lake Club is District No. 7040 which has 2,400 Rotarians in 62 clubs. This district is one of only a few International Districts and has clubs in Ontario, Quebec and northern New York. In addition to serving the communities in which clubs are located, clubs are heavily involved in serving the needs of people throughout the world…

The men and women of the Saranac Lake Rotary Club exemplify the Rotary Motto of' “Service Above Self” by being deeply involved, in all aspects of their community. Projects such as The Rotary Variety Show, the 4th of July Picnic, Cotton Candy Sales, Rotary Entertainment Coupon Book sales and other fund raisers are used to support approximately 25 different worthy organizations in the area such as the Saranac Lake Free Library, Meals-On-Wheels, the Getaway and many youth activities. Other events sponsored each year are The Rotary Radio Getaway Day, maintenance of the Rotary Field next to the Civic Center and semi-annual cleanup of State Highway Route 3 near the boat launching ramp. A new Rotary project to rehabilitate the Berkeley Green is under way as an element of the Riverwalk development.

The Gala celebration on May 19, will start with a birthday party on Berkeley Green at noon following the village cleanup activities. Everyone is invited for a piece of birthday cake. Festivities will resume at 6:30 p.m. at Will Rogers starting with a social function followed, by a dinner with remarks by several area notables and several awards to be presented.

The banquet will be followed by musical entertainment and dancing with the music provided by the 52nd Street Jazz Band. A 75 Year History Book of the Saranac Lake Rotary Club, dedicated in memoriam to Rotarians Phil Hyde and Charles Murphy, is being published and will be distributed to attendees at this celebration. Members of the community are invited to attend this evening celebration by contacting Lionel Arlan at 891-3458 for further information no later than May 9.