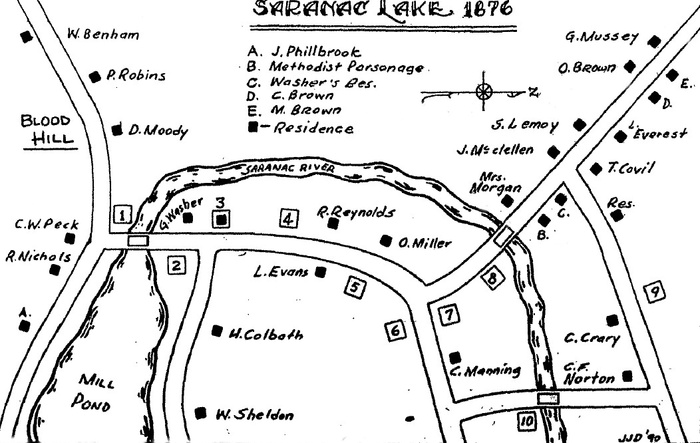 The key to the map is in the text. Note that North is to the right. Adirondack Daily Enterprise, March 17, 1990 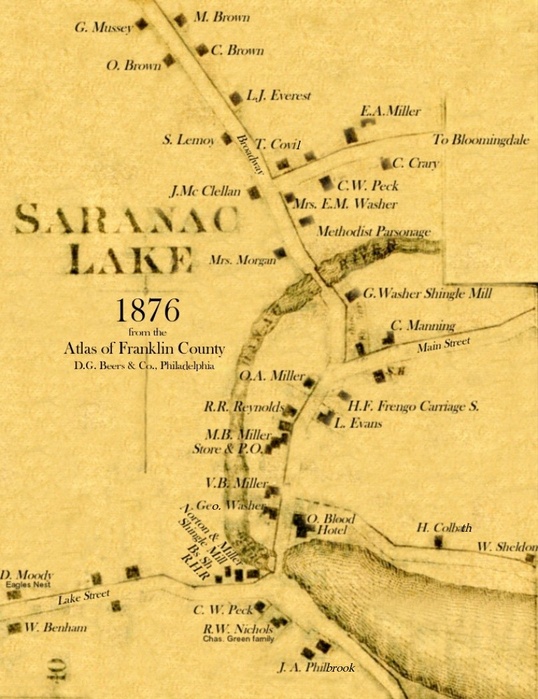 A detail of the 1876 D. O. Beers from which Duquette drew his map. Most of the labels have been replaced for legibility. Courtesy of the Adirondack Research Room of the Saranac Lake Free Library.

Adirondack communities frequently grew up around a sawmill. Such was the case at Saranac Lake. Not only did the village grow from a single infant industry but it was also nursed along by a single family. When Pliny Miller built his sawmill on the Saranac River there was only one other resident in the entire area where, a half mile of the east, Jacob Moody had built his cabin in "The Pines". Some 50 years later a saw mill hamlet had evolved along the river.

In 1876 D. O. Beers & Co., of Philadelphia, published "An Atlas of Franklin County, N.Y" which depicted a folio titled the "South Woods" covering the towns of Duane, Brighton and Harrietstown, with portions of Dickinson and Brandon. In a lower corner of the sheet is map of the settlement at Saranac Lake together with a business directory. With some minor, additions the accompanying map indicates what our hamlet looked like at that time.

The following key is a guide to the map above:

1. The Miller sawmill, shingle mill, and gristmill being operated at that date by Ensine Miller, grandson of Capt. Pliny. The lumber baron, Christopher Norton, was associated with Miller in the sawmill business.

2. Blood's Hotel owned and operated by Orlando Blood, for whom Blood Hill was named. This hotel was originally built by John J. Miller, son of Capt Pliny, and was later owned and greatly enlarged by Wal Murray who named it The Riverside Inn in 1888.

3. The Miller family homestead occupied by Van Buren Miller who was town supervisor in 1876. This building was torn down in 1958 to makes room for the George LaPan Highway entrance.

4. Milo B. Miller, Van Buren's cousin, built and ran a general store here until he sold to Aaron Goldsmith in 1884, who in turn ran a dry goods and clothing store on the premises at 42 Main Street.

5. According to the atlas this was a carriage shop operated by one H. M. Frenga.

8. The schoolhouse which was built under the guidance of Van Buren Miller, a staunch supporter of higher education. It was situated where the Hotel Saranac presently stands.

7. This is the site of the Berkeley Hotel but in the atlas it is shown as the George Washer house. This is confusing because in 1877 Dr. J.P. Lundy was a guest at the Berkeley when it was owned by Charles Gray. The hotel was later purchased by Milo B. Miller.

10. Baker's Hotel built by Col Milote Baker in 1852 next to the bridge which is presently the Pine Street Bridge but was earlier called the Baker bridge. Col. Baker became Saranac Lake's first postmaster in 1854. Ensine Miller became his son-in-law.

Among the residences shown on the map are some of special significance. The R. Reynolds cottage was where Dr. Trudeau spent his first winter in Saranac Lake during 1876, the same year that the Beers Atlas was published. The next six winters the Trudeaus lived in the Evans house just across the street where the Newberry store presently stands. The C. F. Norton home was purchased from Ensine Miller in 1875. One of the oldest houses in the community, Miller had built it in 1852. Later the place was occupied by Fitz Greene Halleck, Dr. Trudeau's guide.

Ensine Miller had married Narcissa Baker, daughter of Col. Milote, and the in-laws became business partners as well. The two men owned all of Lot No. 11 which formed the the southwest corner of the Town of St. Armand. Bisecting the lot, from the southwest to the northeast, ran the Saranac River, which formed a natural boundary between the land owners, Milote taking the property on the east side and Ensine on the west. Ensine was credited with opening the road to Bloomingdale which, at that time, was called the River Road. Narcissa died in 1862 and Ensine married her sister, Julia. Their new home became No. 9 on the map. Ensine died in 1877 and, 10 years later, Julia became superintendent at the Adirondack Cottage Sanitarium which Dr. Trudeau had founded on the side of Mt. Pisgah only three years earlier. Coincidentally, this united a sort of triumvirate of village pioneers who were largely responsible for the growth of Saranac Lake – Miller, Baker, and Trudeau.

Nearby, two hotelmen pioneers also contributed to the development of our community. William F. Martin on Lower Saranac Lake and Paul Smith on Lower St. Regis Lake brought incalculable prosperity to the area by the success of their establishments. These famous resort hotels not only brought outside cash to local coffers but also introduced many prominent people to the area. It was inevitable that some of them should choose to remain, become permanent residents and bring to our region various skills together with valuable knowledge from the larger commercial centers of the business world. Such favorable infusion of new blood would bring to an end the local monopoly of farming and lumbering which formerly had been the only mainstays in the original settlement.

The first 50 years of endeavor was culminating with an optimistic eye to the future. From the date of that first industry in 1827 until the 1876 appearance of the atlas by D.G. Beers our hamlet's growth was painfully slow as can be seen by the sparse development indicated on the accompanying map. The gaps were soon to be filled.

On June 16, 1892 the hamlet on the river became the Incorporated village of Saranac Lake. A rapid increase in population had made this step necessary to cope with the associated needs required to provide municipal services. Both residential and commercial building booms had been creating an atmosphere of prosperity through the community. By 1906, Main Street between Maple Street (later Riverside Drive) and Church Street had become almost wall to wall solid buildings. The Paul Smith electric plant had taken over the former site of the Miller sawmill and across the river was the village pumphouse. From there to Berkeley Square, on the north side of the street, were such buildings as a printing press, a telephone office, the Miller home, the Hotel Empire, and the Town Hall. Next is the Walton & Tousley hardware store, Goldmith's clothing store, a grocery store, a meat market, a photo shop, and a large business block containing three establishments. Filling the, gap where the Reuben Reynolds cottage formerly stood, a new Adirondack National Bank was being built. Next door to the construction was Tom Daley's cigar store, and finally the DelaMater & Magill pharmacy. Across the square was the Berkeley Hotel followed by four fine residences.

Returning to the starting point on the south side of the street, was the huge Riverside Inn and across River Street was the brick Spaulding Block containing a bakery and Paul Smith's commercial office where the electric bills were paid. Next was the Pasho Brothers barber shop, another grocery store, Sam Edelberg's tailor shop, John Hogan's drug store, and, set back from the street, the Linwood Curing Cottage. Where the Newberry store now stands was the McKee building complex containing a store and a restaurant and next door was the Bijou Theater. At 69 Main Street was the Post Offlce, next came the Adirondack National Bank prior to its moving across the street. C. J. Carey's men's clothing store was in between the bank and Leonard's department store. On the corner was the Harding Block with E.L. Gray's book store and sporting goods on the first floor. Across Academy Street stood the large high school building and" then the Methodist Church. Finally on the Church Street corner was the home of Dr. E.L.Trudeau.

Of course there were many other occupations represented on both sides of Main. Above street level many of the buildings contained apartments, law offices, insurance and real estate dealers and offices of architects, doctors and dentists. In the rear of some of these buildings were various establishments having access to the street. Fowler and Ryan each had livery stables and behind the village pumping station was Stark's Bottling Works. In back of Mack Pasho's barber shop at 33 Main was stationed one of the two hook and ladder hose companies.

Sharing some of Main Street's larger commercial buildings were such well-known names as Western Union and Postal Telegraph while some, such Finnegan's Nickel Express, not so well known, operated out of Hubbell's shoe store at 84 Main Street. F.E. Utting at the Spaulding Block, offered crockery, stationery, and fancy goods while Mrs. W.J. Cronk had the latest styles in her millinery shop at 66[?] Main. Levi Martin advertised his "Tonsorial Parlor" at the Riverside Inn while, not to be outdone Bertha Goodsell practiced her expertise as a masseuse at No 74. Meanwhile the Adirondack Enterprise was being printed at its headquarters in the Town Hall.

Today many of the buildings have disappeared from the scene. Gone are Miller's sawmill, the Riverside Inn, the bottling works, the Miller homestead, the Spaulding Block, Empire Hotel, and the Linwood Cottage. With a few exceptions those remaining over the years have experienced such face lifting as to render them unrecognizable. There exists one change, however that marks a harmonious liaison between past and present. Today, our local seat of government stands upon a historic spot. After a century and a half, the village office building; now occupies the former site of Capt. Pliny Miller's sawmill. 1

1. That was then. As of 2012, the building houses a biotech firm, Myriad RBM, and the village offices have moved to the Harrietstown Town Hall.