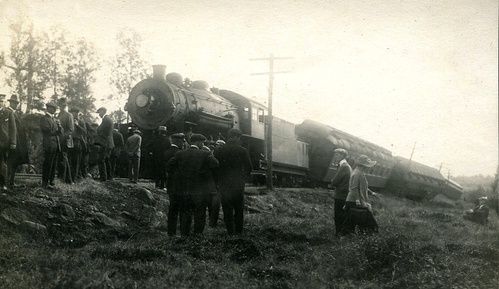 Train wreck between Ray Brook and Saranac Lake. Photograph by Winchester MacDowell, undated. Courtesy of Marsha Morgan. The Saranac and Lake Placid Railroad was chartered to lay tracks between the two points in 1890, and the first train ran on August 1, 1893. The rail line was leased to the Chateaugay Railroad company. In 1903, the two companies were merged, becoming the Chateaugay and Lake Placid Railroad Company; within the year, the new company was bought by the Delaware and Hudson railroad company, and the line was operated as the Chateaugay Branch of the D & H.

Nearly one thousand Italians are now employed on the Saranac Lake and Lake Placid railroad by Brady Bros., who have taken the contract to build the road. 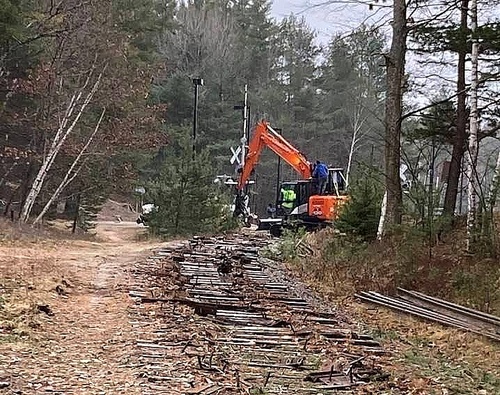 ...The Saranac and Lake Placid Railroad has been leased by the Chateaugay Railroad Company, but will be operated as heretofore in connection with the New York Central, taking the Wagner sleepers and drawing room cars to their destination...

A special meeting of the stockholders of the Saranac & Lake Placid R. R. Co. was held at Saratoga last week, at which directors were chosen indicating that the D. & H. has practically taken over the management of the road. The directors later changed the principal office of the company to Plattsburgh. They include such well-known names as Hon. Smith M. Weed, F. B. Smith and J. N. Stower, of Plattsburgh; Talbot Olyphant, R. Olyphant and F. M. Olyphant, of New York, and H. G. Young, of Albany.