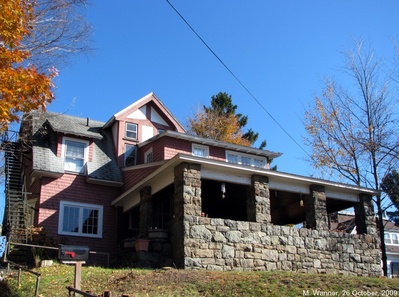 The house at 66 Franklin Avenue was designed for Paul Schelling by W. L. Coulter  and built c. 1900.

An electric bill, dated 1906 or 1907 is in the name of Paul Schelling. For June 17 and July 16, the bill totals 60 cents. (Adirondack Collection, Saranac Lake Free Library.) The house, then numbered 65 Franklin, was a small, two-story rectangle; the front veranda had a round section in the southwest corner, facing the view of Lake Flower.

The neighborhood and the house first appear on Sanborn maps in 1908.

The records of the TB Society show the house, inspected on the following dates, was rented to the persons named:

In January 1921, the Mountain Home Telephone Company Directory has a listing for the C. G. Stirling residence at 66 Franklin, phone 459-W.

By 1931 Sanborn maps show that the front of the house had been altered by the addition of the present large rectangular stone porch and second floor extension above it.

By May 1962 a large rear addition (double garage?) is shown.

In later years, this house was part of the Carmelite Monastery at 68 Franklin Avenue next door and was attached to it by an elevated walkway. The walkway was removed when the Carmelites sold the properties.