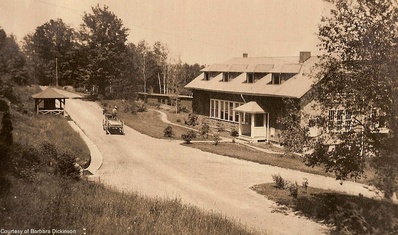 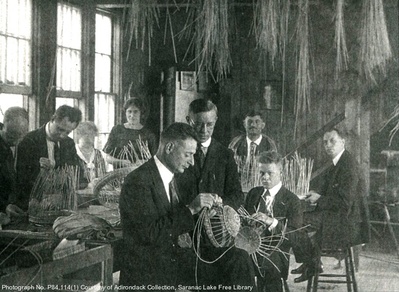 Art and craft work was part of Trudeau Sanatorium's occupational therapy program since its beginnings in 1903. This photo shows well dressed patients weaving baskets in Scholfield Workshop. Doctors prescribed specific periods of time for exercise at the workshop, also including leather and silver work, bookbinding and illumination. The Study and Craft Guild continued this tradition by bringing instruction to patients' bedsides all over the village. Among the instructors was the artist Anthony di Bona, whose sculpted head of Dr. E.R. Baldwin is in the collection of the Smithsonian American Art Museum. Adirondack Daily Enterprise, September 2, 2011 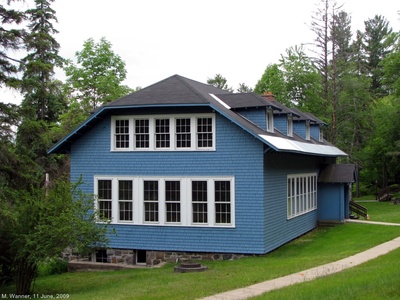 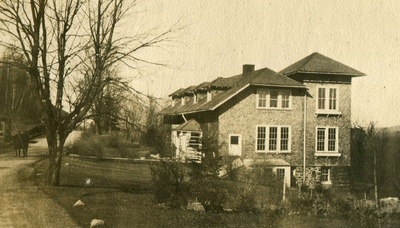 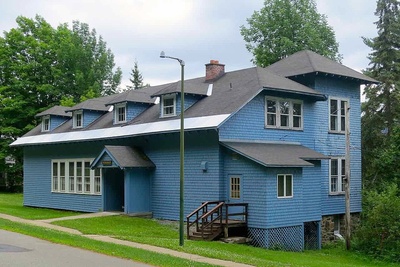 Scholfield Workshop, 2021
Courtesy of John Eldridge
Description: Scholfield Workshop is a one-and-one-half story rectangular schoolhouse building with an attached office tower commanding a fine view of Baker Mountain across the Saranac River below. The frame, shingle-clad building has an uncoursed, rough-cut rubble stone foundation and is surmounted by hipped roofs over both the main section and the tower, with a clipped gable end over the main section. The roofline is broken by a row of dormers with clipped gable roofs. Windows are grouped in schoolhouse fashion for maximum daylight and contain double-hung sash with six-over-six panes. Windows in the top story of the tower are diamond-paned and leaded, in contrast to most diamond-paned windows used in the region, which have wooden muntins. There is a simple pedimented entrance porch on the west elevation. The building formerly featured a fine weathervane portraying pine trees and grazing deer, which may have been made in the workshop; it is believed to have been removed when the building was re-roofed after 1993. A similar weathervane on the Harrietstown Town Hall may have been a duplicate of the one on Scholfield Workshop.

History: The workshop is named in honor of Herbert L. Scholfield, an invalid patient remarkable for his philosophy and endurance and skilled in many handicrafts. In 1993 the workshop was one of 22 extant buildings built before 1915, within the lifetime of Dr. E. L. Trudeau, who described it this way: "In 1909 Mrs. Walter L. Goodwin erected a workshop building for the use of the patients . . . a most attractive structure. Every convenience for bookbinding, brass work, leather work, basket-making, photographing, framing and decorative work is provided, and an instructor is always at hand to teach and help the patients. . . . Apart from the value of the instruction they receive, the relief from the monotony of institutional existence makes Mrs. Goodwin's gift a most welcome one to the patients and the management." 1

A notable artist who worked there was Anthony di Bona (1896-1951), an accomplished sculptor who came to the sanatorium as a patient in 1929. Novelist Walker Percy described the workshop (next door to James Memorial Cottage, where he stayed) in the early 1940s: "From within came a sound of whirring and a high clamor of talk." 2