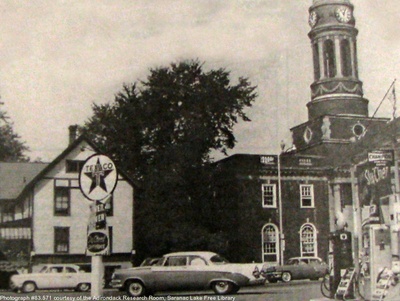 The house at left is the Seaver Miller Cottage; the gas station in the foreground is in front of the Spaulding Block. Adirondack Daily Enterprise, July 14, 2001

Address: razed to make room for the George LaPan Highway

Other information: Originally the home of Van Buren Miller. In 1865, his cousin Milo B. Miller opened a general store in the house. Seaver A. Miller was the last of the Miller family to occupy the home.

Col. Milote Baker's little store, across from his hotel on Pine Street, was probably the first such establishment in Saranac Lake. It burned in the mid 1860s and just about that same time, Milo B. Miller returned from the Civil War to open a general store in the basement of the Miller homestead at 24 Main St. A record book from his store offers some interesting prices. A plug of tobacco went for 10 cents, a pair of ladies hose cost 25 cents, thread 5 cents a spool, shoes $2.75 a pair, cigars 5 cents, beans 10 cent per lb., tea 50 cents lb., crackers 10 cents lb., and Cort Moody bought a half pound of candy for 15 cents.

The Miller building, built in 1856, was torn down to make way for the LaPan Highway in 1957. At that time it was the oldest house in the village.