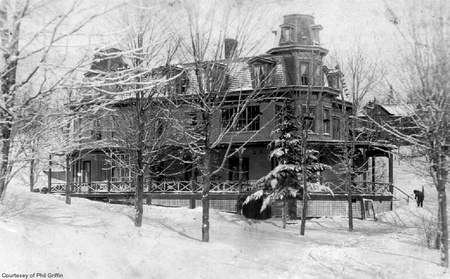 The Villa Dorsey was a good example of Second Empire style 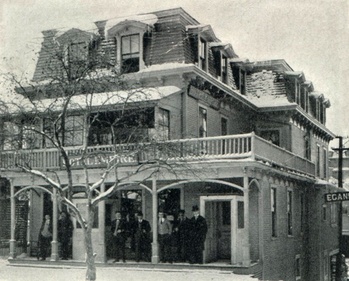 The Empire Hotel, like several other buildings of the era on Main Street, had a Mansard roof

Second Empire is an architectural style named for the "French" elements in vogue during the era of the Second French Empire, the reign of Louis Napoleon Bonaparte, from 1852 to 1870. In the United States it was most popular between 1865 and 1880; it often combined a rectangular tower, or similar element, with a steep, but short, Mansard roof, the roof being the most noteworthy link to the style's French roots.

A Mansard or mansard roof is a four-sided gambrel-style hip roof characterized by two slopes on each of its sides with the lower slope at a steeper angle than the upper that is ordinarily punctured by dormer windows. Often, the upper, flatter-pitched part of the roof cannot be seen from ground-level. The roof design was first popularized by François Mansart (1598–1666).

"Three Mansard-style buildings are still standing on Main Street: the Milo Miller Store, Little Joe's (behind its later brick facade), and the Post Office Pharmacy. They constitute the heart of Saranac Lake's earliest commercial district and now the heart of the downtown Berkeley Square Historic District. The Milo Miller Store is the oldest and simplest version of the style. The story goes that when Milo Miller served in the Civil War, he saw more urban versions of the style on his travels. When he came home, he built his new store — the first in the village in the new style, simplified." [Mary Hotaling]

A house on Brandy Brook Avenue, and 111 Broadway (now 114 Broadway), have Mansard roofs, as did the Villa Dorsey, the Grand Union Hotel and Algonquin Hotel, and perhaps other houses and hotels which are gone.