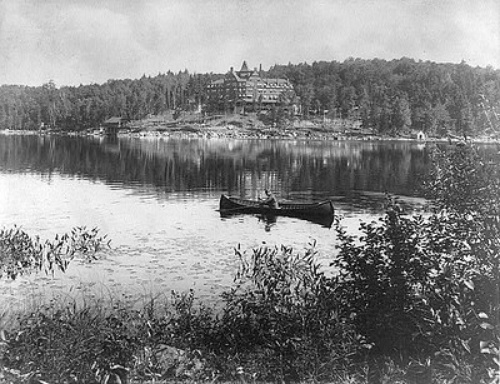 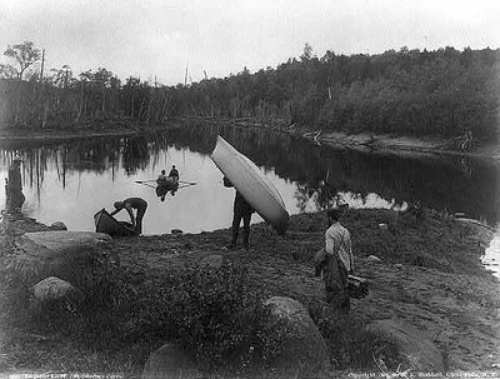 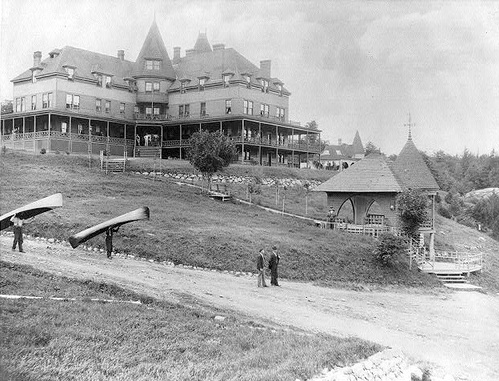 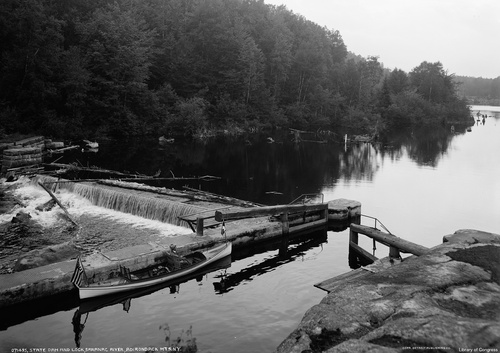 Bertrand H. Gray in Scout, at the lower locks of the Saranac River (Detroit Publishing Co., between 1900 and 1910). 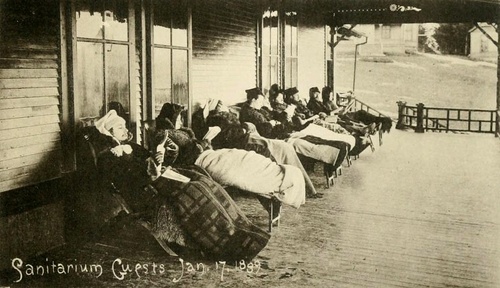 Seneca Ray Stoddard was born in 1843 in the Town of Wilton, Saratoga County, NY. He spent most of his working life writing about and photographing the Adirondacks. At age 18 he worked as an ornamental painter of railroad cars in Troy, New York. In 1864 he moved to Glens Falls and opened a sign painting shop. Next he started painting landscapes and portraits. Soon he began using a camera, lugging the heavy equipment, glass plates and chemicals into the outdoors. By 1867 he was well known for stereo views and by 1874 photography became his main occupation.

From 1870 on Stoddard was making trips to the Adirondacks, creating the photographs for which he is still most noted. By 1876 he was selling 2000 views of the Adirondacks. Today the Adirondac Museum in Blue Mt. Lake has 5000 to 6000 of his images; many more are in the Chapman Museum in Glens Falls. During the 1870’s Stoddard produced guide books illustrated with engravings and photographs, with revised editions for the next few decades until 1914. Through his famous photos, and with his paintings, maps, souvenirs, booklets, lectures, and magazine articles he built his career on the growing recreational industry. 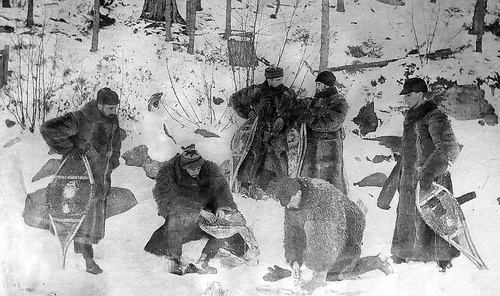 Snowshoeing Party at Saranac Lake, c. 1900
From "Scrapbook No. 1" Saranac Lake Free LibraryHe was commissioned by such wealthy land developers as W.W. Durant, Robert Pruyn, and Collis P. Huntington. Various railroads had him document their routes. Verplanck Colvin hired Stoddard in 1878 to take charge of the photographic division of the New York State Topographical Survey of the Adirondacks.

An early supporter of conservation, in 1892 Stoddard was invited by the Forest Commission to address the New York State Assembly. Stoddard gave a spirited talk and slide show depicting the abuses of logging, especially the damming of streams and killing of trees in “drowned lands.” This show he took all over the state. Observers credited Stoddard as instrumental in the passage of the act creating the Adirondack Park.

Stoddard married Helen A. Potter in 1869 in Glens Falls. It was a happy marriage of two with pronounced senses of humor. They had two sons, Charles Herbert and Le Roy Ray. Charles became a successful military man and lawyer; Le Roy Ray a doctor specializing in plastic surgery. Seneca’s beloved Helen died in 1906. In 1907 he married Emily Doty. Seneca died in 1917, Emily in 1936.

Pieter Fosburg in the June-July issue of the Conservationist said of Stoddard:

"…posterity will know him best as the man who with his bulky old-fashioned camera and tripod, his glass plates and emulsions, captured the Adirondacks. By recording so faithfully and with such feeling the beauty of the North Woods, Stoddard provided a powerful argument for both their protection and their enjoyment. He was a conservationist."

Although Stoddard had come to and photographed Paul Smith’s in 1873, he may not have come to the Rainbow Inn until 1877. In Footprints on Adirondack Trails Charles Wardner writes of his father James: "In the spring of 1877 I determined to make a start of building the dam at the lower end of Rainbow Lake." He continues: "S.R. Stoddard, a photographer from Glens Falls, came to the Rainbow Hotel a short time before the water began to back up over what had been a tamarack swamp back of the hotel. He took a picture of one corner of our back porch, showing the inlet and the old boat house point in the distance. Addie leaned against a post at my left, while I was seated in a chair with Katherine on my lap and Louise, five years old, leaned against my right knee. Two of our guests are seated on the porch railing, while my son Frank stands back of Addie. At the extreme right can be seen Al Abbot, one of our guides." 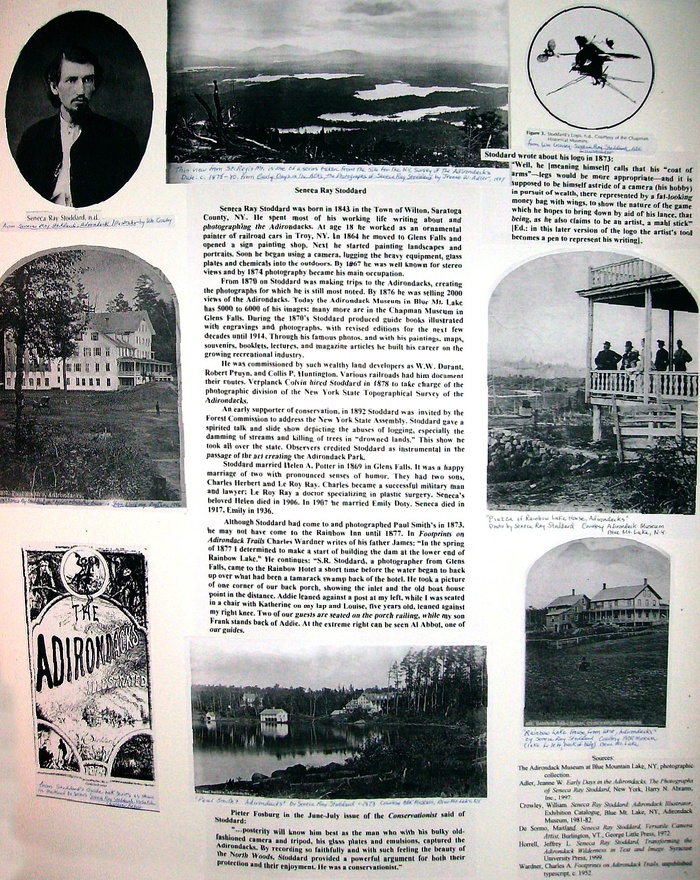 "Seneca Ray Stoddard" by Pat and Tom Willis, photo of display taken 2/2009. Click on the image to enlarge the display. Stoddard wrote about his logo in 1873:

"Well, he [meaning himself] calls that his “coat of arms”—legs would be more appropriate—and it is supposed to be himself astride of a camera (his hobby) in pursuit of wealth, there represented by a fat-looking money bag with wings, to show the nature of the game which he hopes to bring down by aid of his lance, that being, as he also claims to be an artist, a mahl stick” [Ed.: in this later version of the logo the artist’s tool becomes a pen to represent his writing].

Brighton History Days were held one weekend each summer from 1994 to about 2010, sponsored by the Brighton Architectural Heritage Committee.

AUDIENCE WAS SPELLBOUND BY STODDARD

A crowd is expected for the showing of the slides of Stoddard photographs on Sunday, Aug. 23, at 8 p.m. at the Hotel Saranac Ballroom.

None of his lectures were more popular than those on the subject of the Adirondacks by which he took his audience, according to an account in the New York Mail and Express, following an appearance in New York City in 1893 "into the forest's depths, across carries, into club preserves, up mountains and down rapids. He hunted with them, introduced them to camp life, to lumber and mining camps, to the noted guides." Through these lectures he not only publicised the Adirondacks but was influential in persuading the State legislature to create the Adirondack Park in 1892.

Maitland DeSormo, who will exhibit from his large store of Stoddard photographs, is no stranger to the Adirondacks and many have read his numerous articles on the region which have appeared in North Country Life and York State Tradition, in Ad-i-ron-dac and in Adirondack Life.