Shirley Anne Rivers was four years old when she came to cure from T.B.

The retired nurse [possibly Eleanor Mullen] talked about “Miss Rivers”, the patient that had made the greatest impression upon her.

“Shirley Ann Rivers, she was the personality kid. At four years old, she knew how to get along with everybody. Everyone adored her. She was so cute and smart. The patients, doctors and nurses all called her ‘Miss Rivers’.

She had clustered abscesses in her lungs. Today, drugs could easily cure her. She came from a poor family in Mineville. They were a big family with no money and really no interest. They hardly came to see her. Maybe they couldn’t. Anyway, we all were nuts about her. We all bought her clothes. The patients made her beautiful hand-smocked dresses. We’d put them under the ultraviolet lights to kill the germs before she wore them. She’d stand in the window and call out of everyone and didn’t miss a trick. 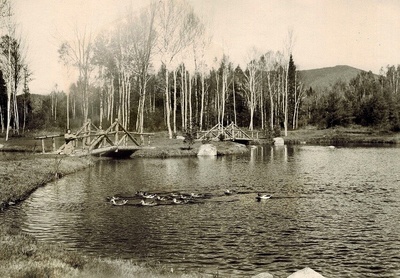 The duck pond at the New York State Hospital at Ray Brook, New York: In the winter, the pond is frozen so the patients and staff can enjoy skating to music from the radio room. It is a pond in the summer and a skating rink in the winter.If you had nothing to do, you’d take her for walk hour to see the ducks. You just liked Miss Rivers. We’d take her to town to get her hair cut and to buy her shoes. Miss Rivers was dressed well. On her birthday, it was something else.

We passed nourishments on a cart between meals and we’d bring Miss Rivers with us. She wasn’t allowed in the patients’ rooms but could stand by the door. Everyone would carry on with her and ask, “What have you got tonight, Miss Rivers?”

She’d have to repeat it at each door. Everybody loved that child. When patients went home, they sent gifts back to Miss Rivers. She was loved.

The morning she went up to surgery, there was a regular parade. Patients called out. “See you later Miss Rivers.” Dear Dr. Gordon didn’t really want to cut into her. He loved that child like family. We were all sick. We knew she had extensive abscesses, but we never dreamed her little heart would fail on the table. It was brutal.

The day she died I was going back on duty at 4 o’clock. Joe, the head of the lab, was walking by. He was crying. I said, “Joe, what’s the matter?”

He said, “The baby died.” That was one awful place. Poor Dr. Gordon was crying in the elevator. The doctors, the patients, nurses, everybody…

I was assigned to her floor that night and had to pack up her things. A lot of clothes had never been on her. Helen, who later became my sister-in-law, had sent her a beautiful handmade sweater the day before. The box had never been opened. I put them in a box and labelled them and sent them home to the family. I don’t know how I ever did it. I used to have pictures of her. God, I don’t know what happened to them. She was one popular little lady.