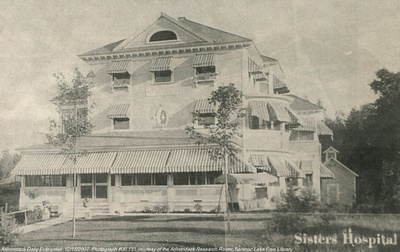 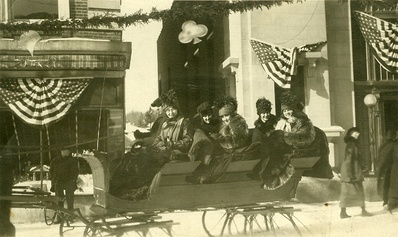 This photo was captioned "Winter Carnival, January 1921. Mike Egan's Sleigh with patients from St. Mary's." But there were no Winter Carnivals in 1921 or '22, and Sister's Hospital was known for handling only advanced cases of tuberculosis. The sleigh is passing in front of the Adirondack National Bank. Courtesy of John Van Anden Address: 144 Ampersand Avenue

Sisters Hospital was built as a private residence, but sold before it was ever occupied to the Sisters of Mercy who had started Gabriels Sanatorium. It was intended for advanced cases of tuberculosis. Sr. Mary Catherine Lantry, who had worked as a nurse at Gabriels, was appointed Superior. A one thousand dollar gift from philanthropist Andrew Mellon helped start the institution. Other assistance came from the Knights of Columbus, the Elks Club, and especially William Morris. By 1916, there were thirty-one patients, and the building was enlarged by raising the roof and adding cure porches. It closed as a TB sanatorium in 1941 and subsequently used as a home for aged or chronically ill nuns. It closed in 1951.

The site can be identified by its stone wall on the south side of Ampersand Avenue. The old hospital is gone, and a new house, owned by the Hanning family, occupies the rear of the site, barely visible from the street.

In a series of talks he gave in the Saranac Lake schools years ago, the historian Maitland DeSormo told about his father, who was a patient at St. Mary's. They had come to visit him from Malone. While his mother stayed with his father at the hospital, Maitland walked down Ampersand Avenue to the shore of Lower Saranac Lake. He loved it and hoped to live there some day, which he eventually did — in the former Ampersand Golf House across Ampersand Bay.

Its entry in the 1911 TB Directory read

ST MARY'S OF THE LAKE (June 1910) For advanced cases only. Capacity:—16. Rates: From $5.00 to $25.00 per week; limited number of free patients. Supervisor: Sister Mary Catherine, 94 Ampersand Avenue, Saranac Lake. Application should be made to the Supervisor.

The new institution to be established by the Sisters of Sanatorium Gabriels at Saranac Lake promises to prove a most worthy charity. The house which they have secured is the Blauvelt cottage, which is one of the largest in the village, with a lot having a frontage of 300 feet on Ampersand Avenue. The cottage will be remodeled and an annex built, all to be ready for formal opening May 1st. The home will be devoted largely to the treatment of penniless tuberculosis patients in an advanced stage and will be in charge of experienced nurses. Medical attendance is to be given gratis by the physicians of Saranac Lake. This will make the seventh institution for the treatment of tuberculosis located in this northern portion .of the Adirondacks.