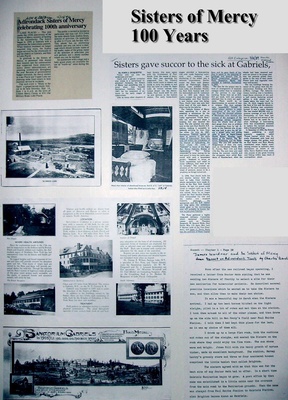 "Sisters of Mercy" by Pat and Tom Willis, photo of display taken 2/2009. Click on the image to enlarge the display. The Sisters of Mercy arrived in Gabriels in 1896 to choose a plot of land from the land holdings of Dr. William Seward Webb for a tuberculosis sanitarium. On a March day, they were met at Paul Smiths Station by James Wardner and his sleigh. He toured many sites for them but left the optimal site for last. From a flat rock on Ben Monty’s field, near the station, the Sisters took in a view of Jones Mill with its spruce forest, Barney Lantry’s store and the burgeoning hamlet of Brighton with its smattering of houses.

On this site the Gabriels Sanatorium soon grew and a post office was established near its entry off the main road. The hamlet of Brighton was then became known as Gabriels and the station name was changed to Gabriels as well.

They also established the Sisters Hospital on Ampersand Avenue in Saranac Lake.

In 1996 the Sisters of Mercy celebrated their 100th anniversary in the Adirondacks. Their Ministry of Healing continues even after the discovery of effective antibiotics to combat tuberculosis, with care of the chronically ill and the elderly, including work at Uihlein Mercy Center in Lake Placid, where the stained glass windows from Sanatorium Gabriels are installed.