Slater Hill is a hill east of the narrows on Lake Flower, at the south end of Slater Avenue.  The 1909 Winter Carnival Ice Palace was located there;  in 1913 the original Saranac Lake General Hospital was built on the site. The original hospital building is now [2018] Hodson Hall of North Country Community College. 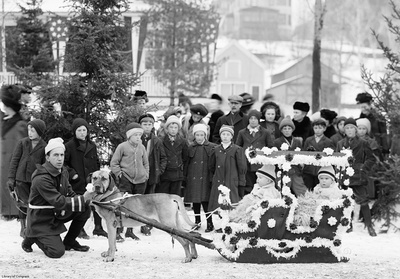 Children's Parade, 1909The ice palace at the Saranac Lake carnival the first week in February is to be located on the Slater hill this year instead of on low ground next to the river. This is to give it, sightliness and so that the fireworks will show to better advantage. Mr. Meagher is at work on it now. In the center there will be a main tower octagonal in shape and fifty feet high. The structure will be 140 feet in length. It will be lighted up with colored and prismatic flambeaux and will be the center of the fireworks display. The other carnival attractions will be hockey, skiing, snow-shoeing, skating, tobogganing and sleighing, besides the grand parade of floats, and decorated sleighs and a doll parade for the children in which prizes for dolls and decorated doll sleighs will be awarded. Professional decorators are already at work arranging for the decorating of cottages and business places in the village The three fastest skaters developed at the championship meetings at Milwaukee and Minneapolis will compete at Saranac Lake for honors for the West against eastern skaters. Some of the star Canadian skaters will also be present, including Logan, of New Brunswick; Bush, the one armed wonder of Winnipeg, and Fred J Robson, of Toronto. Among the professionals who will give exhibitions of fancy skating are Kathleen Pope and Norval Baptie.

Directors of the Saranac Lake General Hospital Association have chosen as a site for the proposed institution between two and three acres of property situated on the Slater Hill tract, just north of Lake Flower avenue. [The Adirondack Enterprise.]