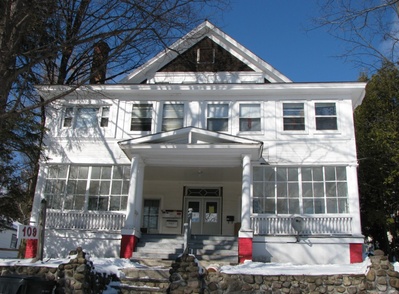 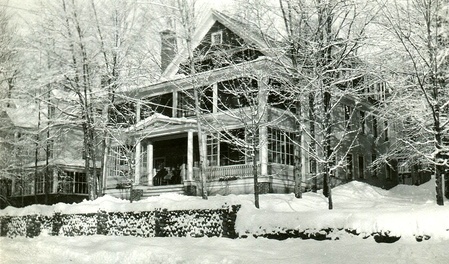 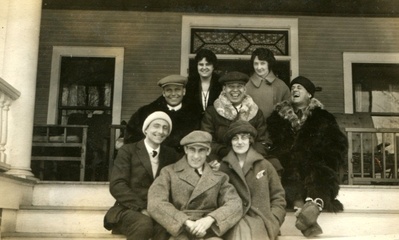 A photograph from an album of Verdo Newman, captioned "The Smithwicks Gang." Gertrude Smithwick is at upper right. Undated, but probably early 1920s. Courtesy of Lynn Newman.

The Smithwick Cottage is a Colonial Revival-style residence, located in the Cottage Row Historic District. It is reportedly the first cottage in Saranac Lake designed and built for use as a private commercial sanatorium. It was built by Michael J. Smithwick and operated by Josephine Smithwick. (In the Irish-American precincts of Hartford, CT, in 2016 Smithwick's is the name of a beer pronounced "Smiddick's.")

Rose Kennedy, best known as the mother of President John Fitzgerald Kennedy, is said to have visited her sister who was curing at the Smithwick Cottage.

Author Walker Percy stayed here while waiting for admission to Trudeau Sanatorium. See the UNC Museum for a photo of Percy at about this time period.

Elise Chapin was a patient in this cottage in the 1930s, as was Georgia Watson Lee Brown.

In addition to Josephine and Gertrude Smithwick, the 1940 Census lists the following occupants:

The Smithwick Cottage is listed as a contributing building to the Cottage Row Historic District on the National Register of Historic Places.

Mrs. Smithwick had operated a private sanatorium at 60 Park avenue.