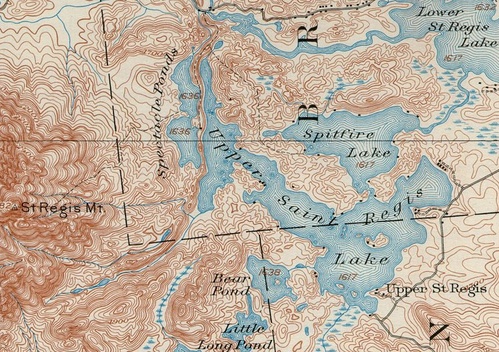 1905 USGS map, Saint Regis, Quadrangle, showing Spectacle Ponds
The Spectacle Ponds are a pair of ponds of 36 and 48 acres, separated from Upper St. Regis Lake by a narrow ridge, or esker, upon which Marjorie Merriweather Post built the lavish compound Camp Topridge in 1923. The name comes from the their resemblance, on a map, to a pair of spectacles; they are separated by less than a hundred yards. They lie at the eastern foot of St. Regis Mountain in Keese Mills.