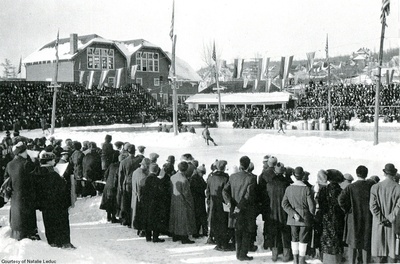 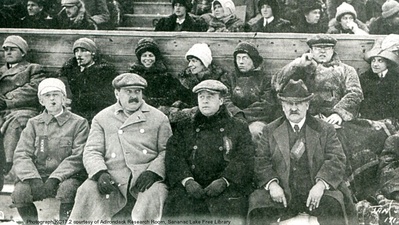 On Jan. 30, 1912, in a year with no Winter Carnival, the stands at the Pontiac Rink on Lake Flower are packed with spectators at the International Amateur Outdoor Championship Skating Races. In addition to documenting the races, photographer William Kollecker took candid shots of the faces in the crowd of onlookers. With blankets on their knees and snow on their distinctive hats, audience members — many of them tuberculosis patients — were entertained as they took the fresh air and could later order a photo to send home. The four men in the front row are wearing ribbons indicating that they are judges. The library has a few of the ribbons from other years but nothing but photos from 1912. Adirondack Daily Enterprise, February 11, 2012 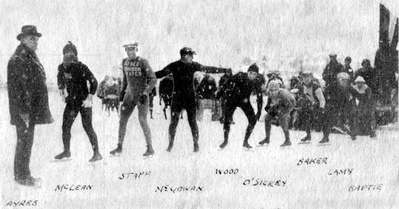 Start of the professional two-mile speed skating in the 1913 Winter Carnival. The starter at left is probably C. J. Ayres. Ed Lamy is second from right. Bobby McLean is mentioned in the 1918 Adirondack Record story above, left. Adirondack Daily Enterprise, February 13, 1987. Saranac Lake was a major center for winter sports in the late nineteenth and early twentieth centuries, and a number of famous skaters were from Saranac Lake.

John Harding, of Saranac Lake, vice president of the International Skating Union, in control of amateur skating in this country and Canada, is in correspondence with other officials of the union relative to the schedule of championship races this winter. The schedule is fixed by mail vote of the officers. The international outdoor championships will probably be held at Saranac Lake this winter. It has been customary to hold these events at that place and Montreal on alternate years. As Montreal had the international championships in 1911, there is but little doubt but that Saranac Lake will be designated in 1912. 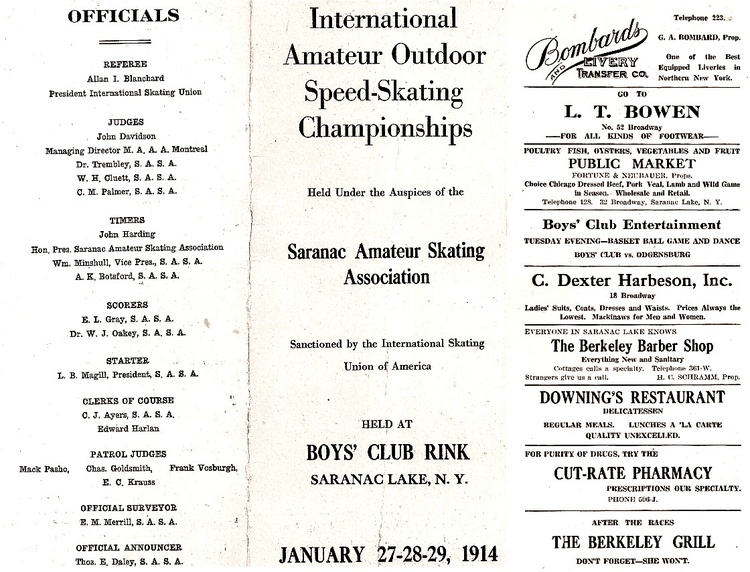 Bobby McLean of Chicago is the champion professional skater of world. After winning two events out of three over Edmund Lamy, of Saranac Lake, holder of the title, in the first races of a two days' programme Thursday, he won all three events Friday.

McLean won two of three events in the series of skating races for the professional championship from Edmund Lamy Thursday. McLean won the 200 yard and mile pursuit events, but lost to Lamy in the two mile pursuit race.

McLean defeated Lamy in each of the three events Friday of the world's championship speed skating races.

Charles Jewtraw of Lake Placid, won the honors in the amateur contests. 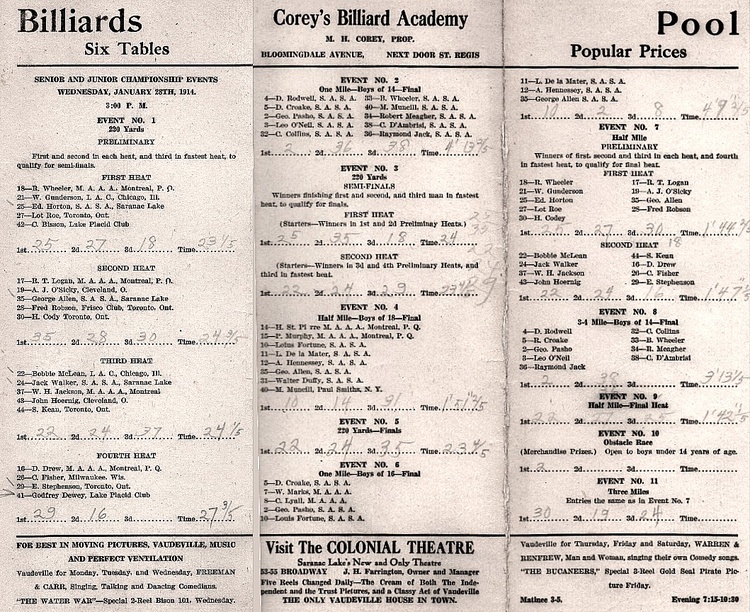 February 1, 2 and 3 have been fixed as the dates for the National Amateur Champion Races at Saranac Lake. A committee comprising C. J. Ayres C. H. Goldsmith and Livingston Chapman was named to take charge of the arrangements.

Plans were made for evening entertainments on the ice and at the Boys' Club during the meet. The program will include a fancy dress carnival and a fancy dress ball. Arrangements for the latter will be in charge P. J. McGarry. 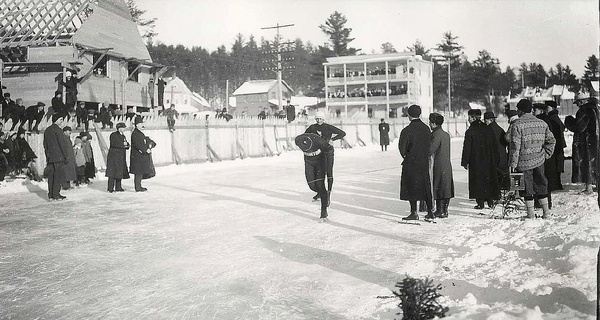 Skating race at Pontiac Bay, c. 1910.  Photo by William Kollecker
Courtesy of Adirondack ExperienceThe meet will follow the Canadian championships which will be staged at Montreal January 28 and 29. An effort is being made to form a circuit including the races at Montreal, Saranac Lake, Lake Placid and possibly Malone. This will enable the skaters of the United states and Canada to compete in the major skating events within a month period and will facilitate the work of the associations involved.

F. H. McKee was named to take charge of the programs of the ice events here and Eddy Whitby will arrange for accommodations for skaters and visitors, it is expected the races will attract a large number of followers of the sport who will have an opportunity of witnessing the races here and international race at Lake Placid within a vacation period.

Admission charge for the races were set as follows: Season tickets, $3.50; single admissions, including grand stand seats, $1.05; general admission afternoons 85 cents for adults and 25 cents for children 14 or under. Evening admissions to the rink 55 cents.

SARANAC LAKE, Jan. 17. —At a conference of the Saranac Lake Carnival Association and L. B. Judson, manager of the Saranac Lake Chamber of Commerce, last night the following' announcement was given out: on Friday Jan. 20th, the following professional skaters will participate in events at Saranac Lake Ice Rink in the first of a series looking towards the holding of the American Professional Championship and a probable world's professional skating championship. Bobby McLean, present American champion also Edmund Lamy, former amateur and professional champion of the world, also Don Baker, metropolitan champion and a fourth entry which will be announced shortly. These events open at Pontiac rink, 2:00 P.M.; Friday, January 20th, and will consist of a quarter, one-half and a mile. It is understood that Oscar Mathiesen of Norway, world's champion professional skater is enroute to this country and everything possible will be done to time the world championship event at Saranac Lake to meet his dates.

This old grudge between Mathieson and Bobby McLean should be well worked out at Saranac Lake in the proposed world's championship races.

Invitations for the American Professional championship have been sent to Ben O'Siekey, Everett McGowan, Arthur Staff, Morris Wood, and Norval Baptie. These men will also be in line for the world's championship.

Bobby McLean is spending this week here in training and Lamy, who is here, is on the job every day.

Before hockey, speed skating was king

Many years ago, there were speed skating clubs in Saranac Lake, Tupper Lake, Lake Placid, Plattsburgh, Malone and most other Adirondack towns and skating families that carried on that tradition. In Saranac Lake, among those that I remember were the Lamy family, the Hunts (Bud and his sister), the Francis Walsh family, the Jim and Phil Daniels family, the Melburn Bruso family ... and many others.

Jack Shea, the famous gold medal winner in speed skating in the 1932 Olympic Winter Games in Lake Placid, was entered in the 1928 Adirondack Gold Cup Amateur Outdoor Speed Skating Tournament, sanctioned by the Amateur Skating Union of the United States. Shea competed in the one-half mile for "boys under 18 years of age on the first day of the meet." This was a big meet; there were 20 to 25 skaters entered in each event, and the first three in each heat qualified for the finals. The races were in Saranac Lake on Feb. 15-16 and in Lake Placid on Feb. 17-18. 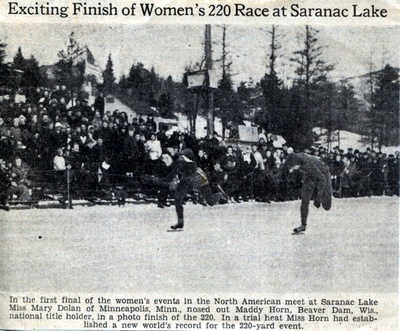 These other locals were in the same event as Shea (I have only the program, not the results): from Lake Placid, Leslie Nash and Ed Kennedy; Milford Deitz, Jr. from Saranac Lake and Donald Mahoney from Malone. This meet had competitors from Chicago, New York City, St. Paul, Detroit, Pittsfield, Cheyenne, Ottawa, New Brunswick and many other cities in the United States and Canada.

James "Bunnie" Sheffield, (the 400-meter Olympic Speed Skating Oval in Lake Placid is named for him) was entered in the one-mile senior event along with these other Placidians: Lionel Newton, John Darrah and William Pratt. From Saranac Lake there were James Munn and Harold Fuller and a D. VanNortwick (probably Danny) listed as skating for St. Bonaventure but probably a Saranac Laker away at college.

Stanley Benham, the famous bobsledder, popped up in the 440-yard event for boys under 14 years of age, and he competed against these other Placidians: Ed Shea, Pete Tobin and James d'Avignon. The lone Saranac Lake entry was G. VanNortwick, and the lone Tupper Laker was Leonard Cleveland.

There was a big field entered in the 220-yard event for boys under 12. From Saranac Lake were Lorran Miller, James McCarthy, A. VanNortwick, James Bellows and Ed Frate. Lake Placid competitors were James Barry, Howard Slater, Donald Beaney, Roy Edgley, Allan Eccleston, James Ward and the only female in the entire field of entries was Katharin Dewey. I believe she was the daughter of Godfrey Dewey and later a bobsledder.

There were more than 20 young men entered in the 220-yard race for boys under age 16. From Lake Placid were Dewitt Bickford, Nelson Winch, Eugene Shea. Dave Tobin and Robert Dodds. From Saranac Lake were Clarence Smith, Howard Malone and Sidney Hodson. From Tupper Lake was Walter Christy, and from our neighbors to the north, Malone, were Kenneth Mahoney, Clarence LePeine and Floyd Bissonette.

From Plattsburgh, the lone entry was Christo Repas, who is probably a relative of my friend Peter Repas, chief of staff for former state Sen. Ron Stafford for so many years. He was always available to discuss North Country-problems, and talk about a sharp-looking guy— he should have been on the cover of GQ.

1932 Canaras:For the third time Saranac Lake High School won the New York Stale speed skating championship. The Red and White bladesters easily scored a decisive victory in the state-wide finals held al the Pontiac Rink February 3rd. Led by John Buehler, Seymour Andrus, Jimmie McCarthy, Andrew Stearns, and Raymond Doty enabled our high school to regain the state title. Although Buehler will be graduated this spring, the other members of the team along with several promising younger skaters, will attempt to uphold Saranac's supremacy on the ice.

Speed skating was such a popular athletic event, it was part of New York state high schools' athletic program. In February 1925, there were 44 skaters from 15 high schools around the state entered what was billed as the annual Speed-Skating Championships of the New York State Public High School Athletic Association, held at Pontiac Rink, Saranac Lake, under the auspices of the Saranac Lake Amateur Skating Association, Saturday afternoon, Feb. 21, 1925 at 2 o'clock. The honorary referee was Daniel Chase, who was the state supervisor of physical education.

The local elected officials were all listed as honorary officials. The village board members were Mayor Alton B. Anderson and trustees Joe Glogan, Vern Wamsganz, Ed Worthington and Joe Drutz. The Harrietstown Town Board members were Supervisor Hayward Plumadore, justices of the peace (who at that time were voting board members) Gordon Vosburgh and Andrew Fortune and councilmen Leo Commo and Maurice McPherson. Town clerk was Clyde Cheeseman. Dr. Warriner Woodruff was president of the school board, and its members were Mrs. Margaret Campion, Dr. Alton Bouton, James LaPan and Dr. Bradley Sageman.

John Duquette wrote of this photograph "The last international meet was held in Saranac Lake in 1927." Adirondack Daily Enterprise, February 13, 1987.