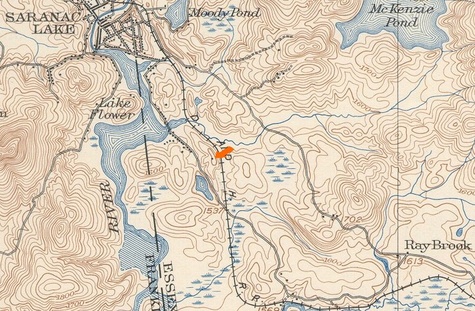 The Spion Kop property is the esker on which Will Rogers Memorial Hospital (presently Saranac Village at Will Rogers) was built in 1928-29.  It was originally owned by W. Smith Fowler who operated a farm there.  It was then sold to the Northwestern Fire Insurance Company to be used as a sanatorium for their employees afflicted with tuberculosis, and later acquired by the National Vaudeville Artists.

In 1919 it was the home of violinist Thelma Given. 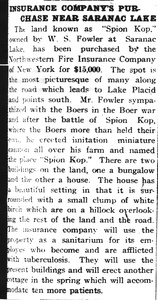 The land known as “Spion Kop,” owned by W. S. Fowler at Saranac Lake, has been purchased by the Northwestern Fire Insurance Company of New York for $15,000.  The spot is the most picturesque of many along the road which leads to Lake Placid and points south.  Mr. Fowler sympathized with the Boers in the Boer war and after the battle of Spion Kop, where the Boers more than held their own, he erected imitation miniature cannon all over his farm and named the place “Spion Kop.”  There are two buildings on the land, one a bungalow and the other a house.  The house has a beautiful setting in that it is surrounded with a small clump of white birch which are on a hillock overlooking the rest of the land and the road.  The insurance company will use the property as a sanitarium for its employees who become and are afflicted with tuberculosis.  They will use the present buildings and will erect another cottage in the spring which will accommodate ten more patients.

[See Taylor's Taxidermy re: moving one of the houses.]

From Candice Millard, Hero of the Empire: The Boer War, a Daring Escape and the Making of Winston Churchill, 302.

"One of the most infamous battles of the [Boer] war [was] Spion Kop. Played out on a fourteen-hundred-foot rocky hilltop overlooking Ladysmith, the Battle of Spion Kop left nearly six hundred men dead and some fifteen hundred wounded. So great was the carnage that both sides were stunned as they called a temporary truce so that they could collect their dead. 'The scenes on Spion Kop,' Churchill admitted . . . 'were among the strangest and most terrible I have ever witnessed.'"