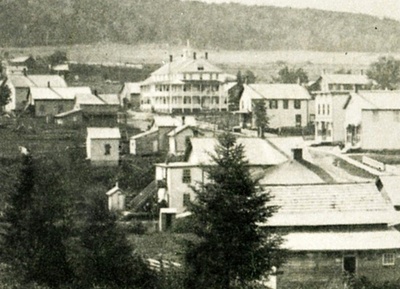 Other information: Royal Perigo was one of the builders.

Mangers: Dan Hough was the first manager, Ed Derby managed until 1877 when James H. Pierce decided to become his own proprietor. 1

Bloomingdale. - Dec. 8, 1871, - Messrs. J. A. Skiff and Royal Perrigo have purchased the corner lot in Bloomingdale of Monro Hall, on which they intend to erect a hotel, with a front 40 by 54 feet, with an L 20 by 40 feet. They have already commenced getting out the timber, and intend to have it ready to accommodate the traveling public as early as June or July next.

Essex County Republican, end of June or beginning of July 1872

A fine hotel is being constructed at Bloomingdale, near the center of the great fishing and hunting grounds, by Messrs. Skiff and R. Perrigo. It is about 100 feet long, 40 feet wide, and three and a half stories high. It will be finished in the most modern style, and will be an imposing structure; airy, convenient, and slightly [sic: sightly]. It will no doubt be a popular resort.

...This place is improving rapidly. Besides the new hotel being built by Pierce and Skiff, (Mr. Perigo having sold his interest to Capt. Jas. H. Pierce, of Franklin,) there has been a new store and dwelling house built by Bunker & Dudley, and there is a move on foot with a good prospect of success to build a church next spring, to cost between 3 and 5 thousand dollars.

Henry Perry Smith, The modern babes in the wood: or, Summerings in the wilderness, p. 336

"An elegant and commodious hotel, replete with every requite convenience, with barber-shop and billard room attached, and capable of entertaining 100 guests, will be completed and opened for business, July 1st, by Messrs. Skiff & Perrigo."

New Year's Capt, JAS. H. PIERCE, of the St. Armand Hotel, gives his first ball, and from present indication we think it will be the ball of the season. The St. Armand is provided with every accommodation and convenience for such an entertainment; the Capt. will be sure to have the best music that the country affords, and we think we can safely guarantee every one who attends a good time.

Within the last week or so Bloomingdale been the scene of two terrible and bloody affrays. The first was between the celebrated Dick, a fighting rooster attached to the St. Armand Hotel, and Bob, the champion gamecock of Franklin. This contest was probably the longest and most stubborn cockfight on record, lasting three hours, forty-six minutes and nineteen seconds, and resulting in a draw—both birds badly punished but each confident of his own powers. [The second was unrelated to the hotel.]

The old St. Armand Hotel at Bloomingdale, which has been closed for nearly two years, will be opened at once by Geo. Merrill, son of Postmaster Merrill of that place.

Mr. Green has thoroughly overhauled his house even to the name, and changed it from "St. Armand" to "Mt. View House," and rightly so, for a more magnificent view of the mountains cannot be found than from the piazza of this hotel. Both Mr. and Mrs. Green are doing their best to meet the wants of the traveller, and no efforts will be spared to make the pleasure seeker's visit pleasant and comfortable.

There is no reason why Bloomingdale, with its glorious sunsets, with its magnificent range of mountains, with its bright sky, pure water, and still purer and invigorating air, with its beautiful drives, should not become one of tbe prettiest spots in the Adirondack region. J. D.

It is rumored that a stock company is being formed to build a large hotel on the site of the old St. Armand Hotel, in Bloomingdale. The company will be incorporated with a capital of $25,000, and they expect to have the house completed by spring.