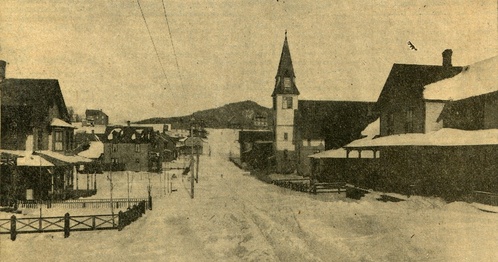 Watertown Daily Times, 1938 Watertown Daily Times, 1938 1 A scene on St. Bernard's street, Saranac Lake, is shown in the above [left] photograph which was taken in 1893. Helen Hill with the E. L. Gray homestead, the first house on the Hill, is shown in the distance. The Gray home is the second from the right. The old St. Bernard's R. C. church, destroyed by fire in 1903, is shown at the center of the picture. The imposing brick church now in use was built on the site in 1911 and opened to the public on Thanksgiving day of that year when the first mass was celebrated. Baker Mountain can be seen in the distance in the picture.