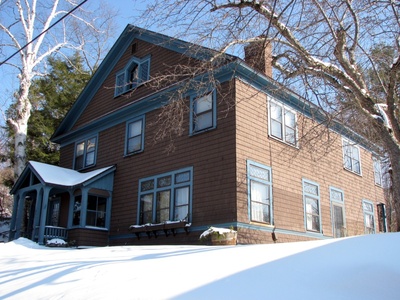 Walter Haskins Larom was the priest at St. Luke's Episcopal Church from 1889 to 1909. From 1889 to 1891, when the rectory is supposed to have been built, it is not known where the Laroms lived, likely in a nearby rented house.

In February 1894 Dr. E. L. Trudeau and family moved into the rectory, until they went to Paul Smith's for the summer, while waiting for their new house to be built; the Reverend Larom's family may have been away, or they may have shared the rectory with the Trudeaus.

Walter Nash Larom, three year old son of Walter H. Larom and his wife Caroline died in the St. Luke's rectory on January 3rd, 1905; after this, Rev. Larom's wife could not bear to live in the house, and for the rest of their tenure, they lived in (and owned) homes in the Park Avenue area. 1 He lived at the St. Luke's Rectory until 1905, and then at the Larom Cottage at 112 Park Avenue.

In 1905 (during the tenure of Rector Walter H. Larom), the house was rented to Dr. George G. Rambaud, who lived in the house and operated his practice there as well. The second floor rear cure porches were also added during this period. There was a fire in the Rectory attic during the period when Dr. Rambaud was in residence. A photo of the January 29, 1906 fire still exists in the church archives, and charred beams can still be seen in the attic ceiling, off the servants' parlor and maid's quarters.

Rev. Walter H. Larom, rector of St. Luke's at Saranac Lake, has decided to retire from the rectorship there on December first on account of poor health and the increasing work of the parish. He has been very successful in his labors there where he has been located for 20 years. He will continue to reside in that village, confining himself to his duties as archdeacon of the archdeaconry of Ogdensburg.

There was another fire in the rectory c. 2010, during the occupancy of Rev. Ann S. Gaillard. Luckily, her husband, Lee, was at home at the time, and the fire was promptly put out.