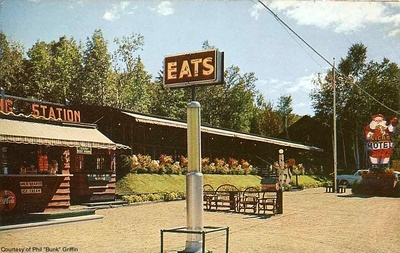 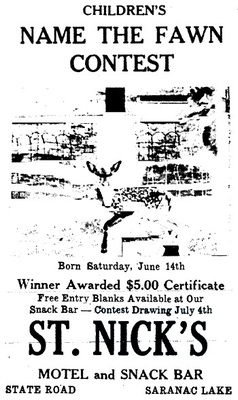 St. Nick's Motel was started by Nicholas and Emily Acrivlelis in 1953 or earlier. It was for sale in 1965 and was bought by Neil Drew; in 1969, a Mr. Schenck of St. Regis Falls bought it.

There was a snack bar and a tame deer petting zoo that featured Japanese spotted deer. The deer were killed in 1963 by a local 22-year-old who sold the venison; he was sentenced to 60 days in jail.

When the American Motel magazine publishers needed a Christmas cover for their nationally distributed periodical, they instinctively turned to the Adirondacks to supply the answer.

In fact, they turned to Nick Acrivlelis in particular and on the December issue cover, the answer is appealingly obvious. A full color reproduction of the giant Santa Claus that stands in a welcoming pose in front of the Acrivlelis motel on the State Road puts Saranac Lake right on the map as far as motel owners and operators throughout the world are concerned.

In explanation, the magazine states that Santa Claus hangs around all year long at St. Nick's Motel Saranac Lake, N. Y. Ever since the attractive sign was installed at a cost of $2,500, guests have requested pictures of it and so owner Nick Acrivlelis wisely put it on one of his picture post cards.

The 12-foot-high Santa looks more at home with the snow piled around him than when this picture was taken during the tourist season.

Nick is more than happy to have his motel nationally advertised by the trade magazine and is planning to enlarge on the St. Nick theme next summer with some top secret ideas.