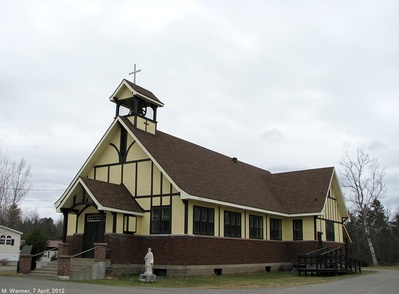 St. Paul's Catholic Church in Bloomingdale is very similar to the 1917 St. John's in the Wilderness of Lake Clear and the 1923 Church of the Assumption in Gabriels.

Property was acquired for the church on Union Street on April 1, 1876 and the first church was built there by 1885. Land for the cemetery was donated on November 2, 1897. 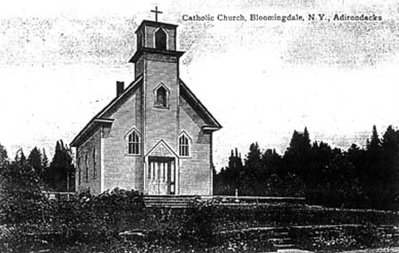 The old Catholic Church at BloomingdaleFather O'Donnell assumed charge of Gabriels and Bloomingdale parishes in May 1893. Both parishes were formerly under Father Waters of Saranac Lake.

The old St.Paul's church was built by Father O'Donnell of Alder Brook. It was located on the Skiff Road in Bloomingdale. New York Jerry L. Parsons was the contractor assisted by local men, namely, Henry Rock, Sr., Henry Rock Jr., Milton Rock, Joe Gladd and Felix Gonyea. In those days "bees" were held. The men worked and the women cooked and made lunch for the group. Everyone helped -- a great deal of work was accomplished and everyone had a good time.

The church was a narrow church with a choir loft. It probably measured about 20 feet by 35 feet, with seating capacity of seventy people.

Father O'Donnell came from Alder Brook on horseback every two weeks to say Mass. He stayed over night at the home of Joe Gladd. Father Murtagh, assistant pastor, helped with the parish duties. There was a choir, Bob and Geraldine LaGoy were among those who sang in the choir.

After the new St. Paul's church was built, the old church was torn down in 1933. Some of the statues and the bell from the belfry was transferred to the new building. The bell carries this inscription:

I am the voice of one crying in the wilderness.
Make straight the way of the Lord

A cemetery was located near the old church and was moved to its present location by Father Donald Gallagher who was pastor at the time. The new cemetery is located off Route 3 at the Franklin and Essex county line and was donated by Mr. & Mrs. Michael Carroll.

The Gabriels Sanatorium under the direction of the Sisters of Mercy had brought an influx of people to this community. Father Dumont was appointed pastor of the two parishes, St. Paul's and Church of the Assumption in Gabriels.

William and Rose Fortune had moved to Bloomingdale in the early thirties and purchased the former Claude Goff home located on the main Bloomingdale road. Mrs. Fortune attended Mass every day. At that time in winter, there were no plowed roads and Mr. Fortune felt badly to think that Mrs. Fortune was walking that distance everyday. Therefore, he donated enough land to build a church, a parking lot and a future rectory in later years.

Father Dumont built the "new" church in 1931, which was modeled after the Church of the Assumption. Charles Simpson was the contractor for building.

Many of the statues were transferred from the "old" church to the "new" as well as the bell previously mentioned.

After Father Dumont retired, Father Donald Gallagher became the new pastor. The parish grew rapidly in spirit and financially. Father "Don" was loved by both Catholics and non-catholics alike, creating a feeling of friendship between religions.

After Father Gallagher was inducted into the Navy during World War II, he was followed by Father Heslin, Father Skelly, Father Thompson and Father McMahon plus other priests.

The rectory was built and CDA was initiated during Father Thompson's time. Father McMahon had been the pastor of St. Paul's and the Church of the Assumption for more than twenty years, witnessing a whole generation growing up. He often baptized a child, watch them grow and then assisted at their marriage ceremony.

Many changes have been made, but one will find the church filled to capacity because people wish to return to the "plain, simple little church in Bloomingdale."

Next Wednesday, August 19, Rt. Rev. Bishop Wadhams leaves for Clinton county, where be will administer the sacrament of confirmation at the following places… On Sunday Aug, 23rd. at 10 a. m., he will dedicate St. Paul's new church at Bloomingdale and at 5 o'clock the same day, he will officiate at the blessing of the new church of St. Rose, at Union Falls and will also administer confirmation…  During September or October, he will administer confirmation at Brushton, St. Regis Falls, St. Clara, Trout River, Hogansburg, Fort Covington and Burke, in Franklin county.

Parishioners of St Paul's Catholic Church at Bloomingdale congregated Sunday morning in the new church, which is located on Saranac Avenue. The Rev. A. J. Dumont, of Gabriels, the pastor, celebrated the first mass at 10:30 o'clock.