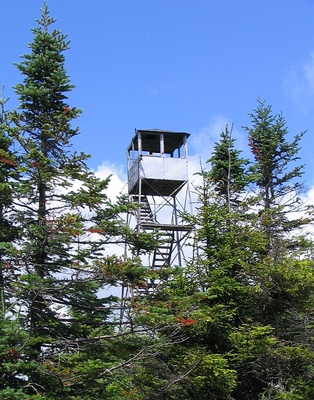 The St. Regis Mountain Fire Observation Station is a historic fire observation station located on St. Regis Mountain in the town of Santa Clara. The station and contributing resources include a 35-foot-tall, steel frame lookout tower erected in 1918, the site of the former observer's cabin, and 9/10 of a mile of foot trail between the cabin site and summit. The tower is a prefabricated structure built by the Aermotor Corporation and provided a front line of defense in preserving the Adirondack Forest Preserve from the hazards of forest fires.

It was added to the National Register of Historic Places in 2005.

District Forest Ranger James H. Hopkins has announced that Edward Rork, veteran Adirondack guide and woodsman of Gabriels, has been appointed state fire observer on St. Regis mountain. He takes the place of the late Albert Otis who was found dead in his cabin several weeks ago.

It will be recalled that Edward Rork enjoyed national publicity at the time President Coolidge was at White Pine camp, after it was announced the Gabriels guide, who knows every inch of the Paul Smiths region, was to be chief guide for the presidential party.

Edward Rork has acted as observer before and District Ranger Hopkins has found his work most satisfactory.