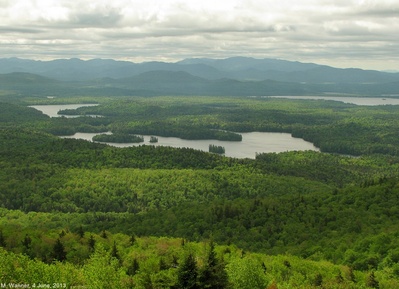 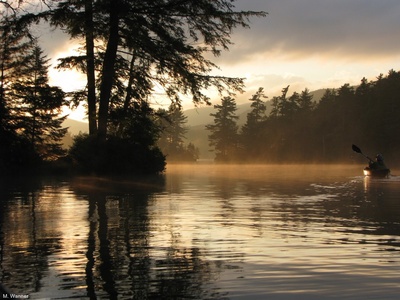 A paddler on St. Regis Pond, near Whipple Pond.

Saint Regis Pond is the largest pond in the St. Regis Canoe Area, at 400 acres, and one of the most populart. There are four islands and nine campsites, and a lean-to. It can be reached by a carry from Little Clear Pond, or from Upper St. Regis Lake via Bog, Bear, Little Long and Green Ponds. It is part of the historic Seven Carries canoe route.

According to a December 15, 1974 article in the New York Times, in 1890, the last-known colony of indigenous beavers in New York state were living on St. Regis Pond, under the unofficial protection of the management of the Saranac Inn. It took a legislative act to protect them from trappers. Later, a colony of beavers was purchased from Canada, and more beavers were imported from Yellowstone National Park in 1906. 1

The Saranac Lake Chapter of the Adirondack Mountain Club will meet at 11 a.m. tomorrow at the Harrietstown Town Hall to drive to Saranac Inn station. From there the group will ski to the outlet of St Regis Pond under the leadership of Henry Premo. Lunches will be carried. Visitors are invited to join the group at the Town Hall.