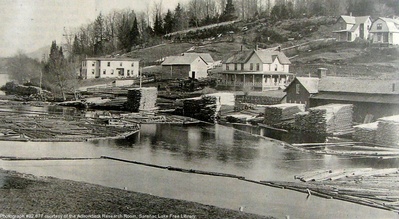 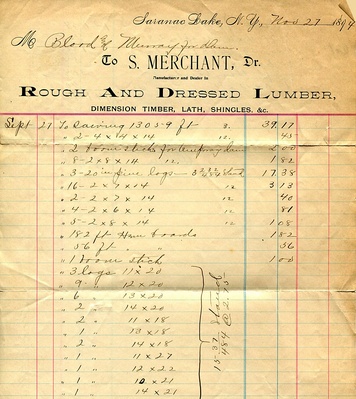 Part of a statement for Wallace Murray, 1894

Steven Merchant was a manufacturer and dealer in rough and dressed lumber in Saranac Lake in the 1890s. He bought dam and sawmill that Captain Pliny Miller built in 1827 on the Saranac River near the Main Street bridge and operated the sawmill for many years before selling it to Branch and Callanan. In 1894 the mill was sold to the Saranac Lake Electric Company. See Electric Companies.

From the article on Frederick A. Isham: "On June 23rd, 1894, Steve Merchant had to appear before the board in answer to a complaint that one of his lumber stacks was blocking the road next to the Main Street Bridge."

From the article, Boating and Boat Building: "Steve Merchant brought a steam tug from Plattsburgh to haul logs to his sawmill at the site of the former Paul Smith's Office Building at the outlet of Lake Flower. Later, Joe Baker purchased the boat from Merchant to tow logs to his own mill and he named the scow the Platt. It was 24 feet long and eight feet wide with a four horsepower steam engine which produced a rate of speed far too slow for any passenger service. When Baker's mill burned down, the Platt perished along with it."

"Steve Merchant of Saranac Lake has recently purchased a new electric spark vapor boat [probably a naptha engine] of Charles Boardway, of Malone, and placed it on Lake Flower Wednesday morning. The engine is manufactured by C. E. Perkins of Malone, and is one of the best that is now in use. Mr. Merchant purchased the boat for his personal use." (Malone Palladium, May 17, 1900)

"According to several old timers including Milo Moody and Bill Disco, the consensus is that the house on Riverside Drive, on the lake side, across from No. 1, was built and occupied by Steve Merchant." (Adirondack Daily Enterprise, September 15, 1954)