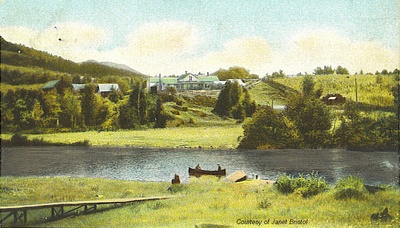 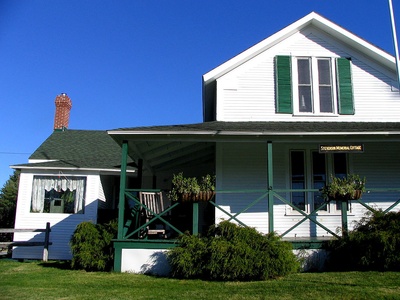 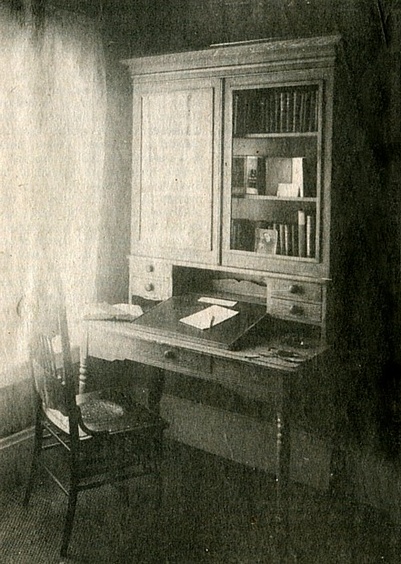 Stevenson worked at this desk in the Baker Cottage. Adirondack Daily Enterprise, May 15, 1987 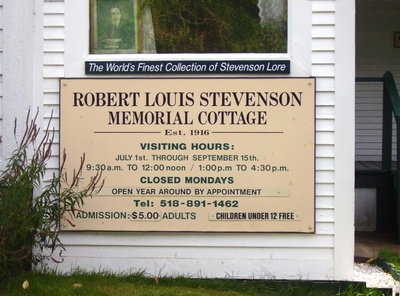 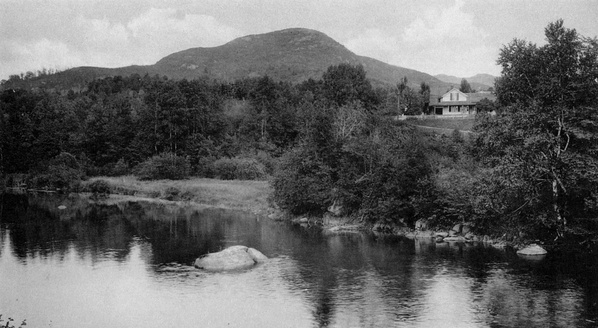 Other information: Originally a single-family cottage built by guide Andrew Baker, an added western wing was used as a cure cottage by Robert Louis Stevenson in from October 1887 through the following April, a fact that made Saranac Lake immediately famous.

From the New York: A Guide to the Empire State, By the Federal Writers' Project of the Works Progress Administration, 1940, Oxford University Press, p. 508

The STEVENSON MEMORIAL COTTAGE (adm. 25c; Wed. free), Stevenson Lane, maintained by the Stevenson Society of America, is a simple two-story, white-painted, clapboard cottage with a large porch extending around three sides, the yard enclosed by a low white fence. During the six winter months of 1887-8, when Robert Louis Stevenson lived here under the care of Dr. Trudeau, he wrote a number of essays, including Pulvis et Umbra, The Lantern Bearers, and Christmas Sermon, finished the Master of Ballantrae, and revised the manuscript of The Wrong Box.

This spoon commemorating both Robert Louis Stevenson's stay at Baker's (left) and John Brown's activities (right) in North Elba is at the Adirondack Museum.Malone Farmer, January 16, 1924

Andrew Baker, at Whose Home in Saranac Lake He Spent Winter Of 1887-88 Not Pleased With All His Habits.

Albert I. Evans, associate editor of the Adirondack Enterprise, recently wrote for the Watertown Times interesting story regarding Stevenson, the novelist as seen through the eyes of Andrew J. Baker, with whom he resided and who probably knew him more intimately than any other Northern New Yorker. The village idol, like other noted men, apparently had feet of clay. Mr. Baker, now an aged man, is a pioneer guide of Saranac Lake, and a citizen of keen observation and clear judgment. It was at his home that Stevenson wrote "The Lantern Bearers," "Gentlemen," a Christmas Sermon," "Beggars," "Pulvis et Umbra" and "The Master of Balantrae." 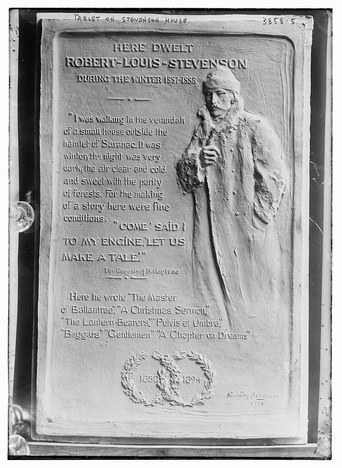 Recognizing Stevenson's greatness as a writer the aged guide now wishes he had been more attentive during the before-the-fire talks he had with [illegible] while the wind howled about the crags of Baker mountain and the ice cracked in the river [illegible]]. "Dog-tired as the result of the hard tasks of the day," says Evans, "and lulled by the warmth of the fire and the soft, pleasant voice of his companion, he would soon become so drowsy as to scarcely sense the words of the genius lounging at his side. He merely remembers that Stevenson's conversation embraced the world and that he listened to strange tales of far countries and peoples." "He does remember, however, that Robert Louis Stevenson was a man of many moods. He recalls the furious tramps up and down the porch in the dead of a bitter winter night, with frequent pauses to gaze at the stars. He also recalls that his strange guest would sometimes write for hours without pause, the sturdy scratching of his pen never ceasing for an instant. There were many other things about Stevenson that seemed "queer" to the guide, which, in the light of later events and the fact that his little home has become a literary shrine, he will no longer discuss. 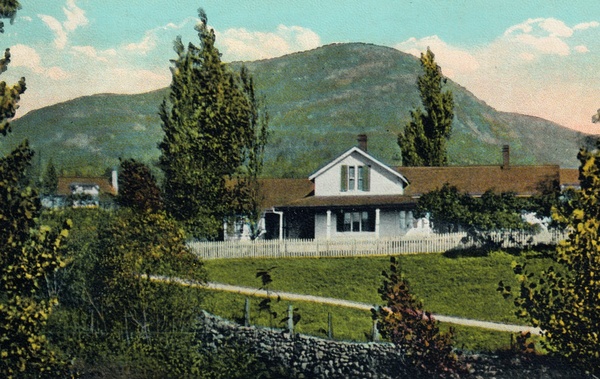 A colorized postcard of the Robert Louis Stevenson Cottage with Mt. Baker in the background, postmarked September 22, 1927
Historic Saranac Lake collection, #2021.3.54. Gift of the Florence Wright Tuberculosis Postcard Collection.
"Old residents of Saranac Lake" adds Mr. Evans, "know that the couple (Mr. and Mrs. Baker) found Stevenson much as other men. At the time he was in the Baker cottage the poet and, maker of strange tales was in a low state of health and often found the bitter cold and stern wilderness surroundings irksome in the extreme. As a result of such conditions, Stevenson was at times a gay and delightful companion, full of good spirits and sly jests. At others he was something of a trial.

Stevenson's habit of leaving lighted cigarette stubs about is known to have caused Andrew Baker no little worry. Fire at that period of the village history was a serious matter, yet to this day one may see the holes burned in the mantel by Stevenson's cigarettes. Holding his strange guest somewhat in awe the guide could but suffer in silence.

"Stevenson's musical efforts on both an ancient piano and tin whistle are known to have caused the guide to writhe in agony. While he does not admit it there is little "doubt that Andrew sought the quiet of the woods when the man of letters made a particularly furious attack on the piano. The guide has never pretended to have fallen under the spell of the whistle music.

"Andrew Baker also had it brought home to him that temperamental folk also have tempers. To use his own words he at times found Stevenson "kind of crotchety." In the main, however, considering the state of Stevenson's health, the woodsman recalls him as usually being of pleasant manner and agreeable.

"Being a woodsman, Baker had a profound contempt for cigarettes and an exaggerated fear of their harmful effects. The endless chain of them which Stevenson smoked daily were a source of constant worry to the guide who feared they were further undermining the health of his guest." 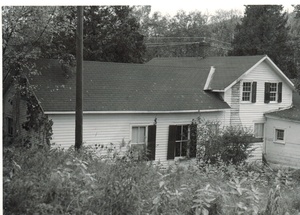