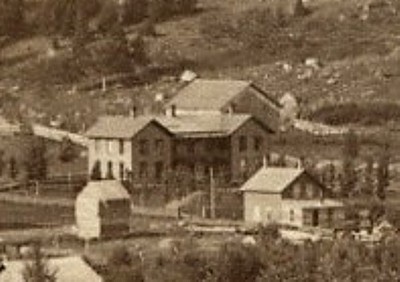 Sunnyside, c. 1880. Cropped from a photograph at Saranac Lake Village, c. 1885 (at upper left). See Historic Image Address: The site is now William Morris Park, a children's playground, and the location of the Adirondack Carousel, which opened in the summer of 2012.

Other information: 22 Bloomingdale Avenue was the site of Ensine Miller's home. It was also the first Saranac Lake home of Keith and Emma Carr before their move to 104 Main Street. 1

On May 22, 1891, the Plattsburgh Sentinel reported that "Surveyor Averill, of Plattsburgh, is laying out the remainder of the Ensign [sic: Ensine] Miller estate, both sides of the depot, in building lots."

In 1906, an ad for The Sunnyside Cottage appeared in the city directory, describing it as "The most pleasant location in the village at 22 Bloomingdale Avenue. House accommodates twenty people. Large airy rooms. Hot and cold water baths. Large well shaded lawn. Two minutes from Union Station. For particulars address Mrs. A. M. Lonkey."

The house was bought by William Morris in about 1918 and used for the Saranac Lake Day Nursery. The site is presently occupied by the William Morris Park, and is the site of the Adirondack Carousel.

The back of Sunnyside, center, photographed from Mt. Pisgah, 1902. At right across Depot Street is the Grand Union Hotel; across Bloomingdale Avenue from the intersection is the Baptist Church.  The small building with two cupolas in the right foreground is the vilage's first fire company, Woodruff Hose.
For the full photograph by William Henry Jackson, see Saranac Lake Village, c. 1902