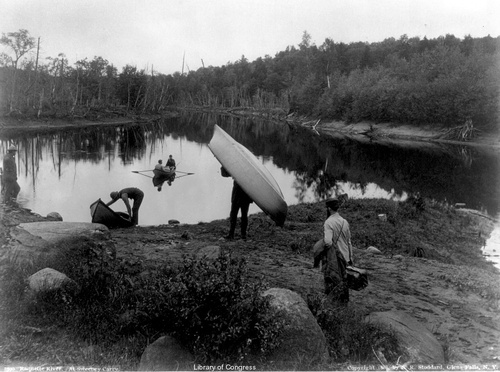 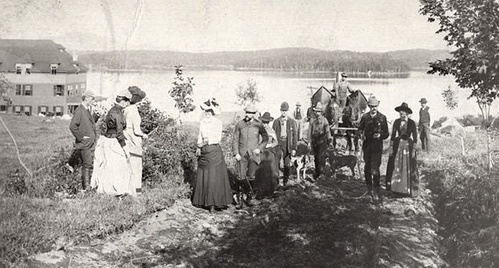 At the Wawbeek Inn end of Sweeney Carry, 1898, photograph by S. R. Stoddard
Courtesy of the Adirondack ExperienceSweeney Carry is a portage trail leading from the Raquette River three miles from Tromblee's Landing to Wawbeek on Upper Saranac Lake; while it is quite a long carry, it saves twelve miles and four hours time for those headed downstream on the Raquette.

Jesse Corey, the first settler on Upper Saranac Lake, built his first home at the north end of Sweeney Carry about 1830. It was named for John Sweeney who took over Corey's site and built a log lodge to accommodate an influx of sportsmen and their guides who were making their way across the carry. 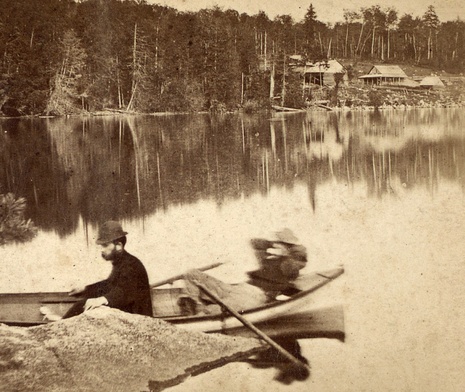 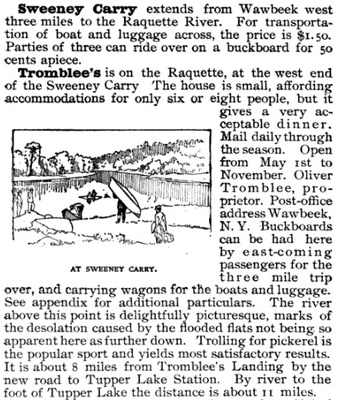 A part of page 92 of The Adirondacks, Illustrated, by Seneca Ray Stoddard, 1893 The case of the people of the State of New York, ex rel. JAS. H . PIERCE against OATMAN COVILL, EDGAR TROMBLEE and OLIVER TROMBLEE was an action for forcible, entry and detainer. It relates to possession of the Sweeney carry between Saranac lake and Racket River. Plaintiff claims ownership and alleges that defendants entered upon the premises during his absence some years ago, set his goods out of the buildings, and have retained possession since. We understand that defendants also claim title and deny the equities of plaintiffs claim, though in this proceeding they maintained only that even if plaintiff has any case his remedy does not lie in this form of action, and that the defendants who are sued jointly have no community of interests. The case was tried before the court without a jury. Decision reserved. W. P. CANTWELL for plaintiff; GILBERT & KELLAS for defendant.

When Wawbeek Hotel Was The Sweeney Carry House

Wawbeek Hotel which with its out-buildings, equipment and furniture is being auctioned off this week, the successor of a big log cabin known as the Sweeney Carry house from a squatter who used to haul boats back and forth between Upper Saranac Lake the Raquette River. The house was of the early Adirondack type, with the timbers unpeeled and chinked with plaster. The shingles for the roof were hand-made out of cedar taken from the neighboring swamps.

The opening of the house as a hotel was a fine illustration of the old adage “Possession is nine points of the law." James H. Pierce of the Bloomingdale, Vermontville section, a farmer who was active in politics and had business interests wherever he saw an opportunity of success, and C. F. Norton, the prominent Plattsburgh lumberman, both claimed ownership of the house and land known as The Carry. Pierce said he had acquired it from the state which sold it for unpaid taxes.

Norton kept in touch with the situation more intimately than his rival, however, and one fine day dispatched O. A. Covill, a guide at Paul Smith's, to take possession of Sweeney end of the Carry, and Oliver Trombley of Lake Clear to settle at the other end. Pierce's aspirations ceased forthwith.

Mr. and Mrs. Covill did not expect to remain in the cabin more than a few months. C. F. Norton had merely hired them to take possession and make good his title to the property. Sweeney was recompensed also, it is understood, upon his consent to withdraw, although he had a no real claim to Carry or cabin.

It was in March, 1878, when they first occupied the cabin. The Adirondacks were then just coming into popularity. The Carry was the only passage except Indian Carry between the Upper Lake and the Raquette River for parties of canoeists and fishermen as well as hunters. Indian Carry was a more roundabout route and much less frequented.

At first the Covills merely drew boats back and forth over the trail, which ran for three miles through the woods over practically the e same route as at present. At the height of the season forty-five boats a day would be carried both ways. Then the men began to ask for dinner and the house became a regular stopping-place. Finally it grew into a boarding-house and at last lodgers were taken.

Four or five years after the Covills came they bought the cabin and about forty-four acres of cleared land surrounding it from C. F. Norton, and for nine years longer — they managed the hotel thirteen years in all — they kept the place open winter and summer.

It was a long season. The ice was still in the lakes and river when the first parties began to arrive to enjoy the early fishing. Grover Cleveland, both as Governor and President, returned year after year to angle and Miss Folsom whom he afterwards married often accompanied the party. The late President boarded at the house of E. R. Derby, the Prospect House, which preceded Saranac Inn with which Mr. and Mrs. Riddle were connected for so many years. Mrs. Derby is now Mrs. Edward P. Pearse of 19 Front street.

The President gave the place a name and various other politicians soon began to frequent the Prospect House, Sweeney Carry, etc. Colonel Daniel Lamont, prominent for years in New York State' politics, was one of these. Mark Hanna, Republican boss of Ohio and the man who made President McKinley, was another. Senator Hanna's influence added to the fame of the country.

General Christensen of Brooklyn, Dr. C. R. Romeyn of Keeseville, well known throughout the central portion of the Adirondacks; Dr. James of New York, Dr. Clifton Edgar of New York, a noted specialist in his day; John V. Van Wert, a wealthy leather merchant; Oliver Herford, the artist and illustrator of whom Mrs. Covill says, "we always had to kick him out;" and many another man eminent in business or professional circles or politics, were glad to atop at the Carry and eat a meal prepared by Mrs. Covill.

Dr. Loomis of New York, one of the most noted physicians of his day in the metropolis, was wont to stop at the Carry for rest and refreshment. "It used to be quite a gala day when he stopped on his way from Paul Smith's," says Mrs. Covill. “It was noised about when he was coming and there would be a crowd of people waiting to ask his advice.” Dr. Loomis was a pioneer in the treatment of tuberculosis and became a specialist in the disease.  Up in the mountains, the doctor was not pleased at these summer receptions at the Carry and the Covills didn't like it either.

Frederick Woodruff, of Orange, N.J., was one of the first to build a camp in the vicinity. He located on Birch island only half a mile from the Carry house and his camp was a notable one for that time. Dr. Herter purchased it later. William P. Elery, a New York broker, was another.

George Sharp, reputed to have secured the first franchise in New York for a horse car line, put up a camp later in Gilpin Bay. Sharp was accused later of fraud and spent a term behind prison bars.

The Morgan camp in the narrows was one of the most beautiful in the neighborhood and represented another step in the tendency toward increasingly greater luxury and comfort.

All of these camps were erected while the Covills were at the Carry, but it was not until after their departure in 1891 that the Upper Saranac was built up into a large camp colony.

The construction of these fine camps and the class of patronage that the Carry house enjoyed induced Krumholtz and Smith to put up the present Wawbeek Hotel. C. Edmund Krumholtz was the moving spirit and Smith withdrew two or three years later, dying finally at the Adirondack Cottage Sanitarium for tuberculosis.

The hotel cost about a hundred thousand dollars and was a huge mistake from the beginning. Mrs. Covill tells how after its erection some of her old patrons used to come and tell her how sorry they were the old cabin had been torn down. The Carry house seemed to be a part with the wild, primeval beauty of the woods and lake, although the woods were allowed to remain as before when the house was removed and the clear space was not much enlarged.

Beside the hotel were built several cottages of a type in keeping the main building. There was every convenience and comfort, and the hotel was a popular rallying point for campers along the lake in the vicinity, but hardly a single season was successful.

Guests at the hotel received their mail, as during the days of the Carry house, by boat from Saranac Lake The old mail boat made daily trip from the village and its arrival was one of the events of the day. William Sheldon was owner and he, or his men later, rowed the boat, loaded with groceries and passengers, the en tire distance. It was nothing but a big row-boat anyhow with two or three oarsmen to propel it. The boat called at most of the camps and at the Prospect House as well as at the Carry house.

There was no State road of course for several years, only a trail. The building of the New York Central Adirondack division opened up the country and when Saranac Inn became a station the goings and comings of the mail boat ceased.

Mr. Krumholtz continued as manager until he took hold of the Ruisseamont in Lake Placid, although the Wawbeek was several times at auction even after wealthy camp-owners about Upper Saranac Lake had purchased it. But a summer hotel was too costly a project even for them and two years ago the hotel remained closed.

Last year William H. Reardon, who has been successful as a hotel manager in Long Lake, leased the property, and managed it for a season. But ill luck continued to dog the Wawbeek. This time it was in the shape of a visit from inspector Hudson of the State Fire Marshal's Office, who told the management and owners that the building did not meet the requirements of the law. Recommendations, similar to those made to summer hotel proprietors here and at Lake Placid etc., were made in regard to lighting facilities, fire escapes and so on. These were actually mandatory, although the hotel was given a reasonable period within which to comply with the law. The owners, therefore, decided to demolish the hotel.

But the site of the hotel may yet be used for summer camps and cottages, For it constitutes one of the points of public entry to the lake which must remain perpetually. The auction is set for to-day and tomorrow and the tearing down of the building will follow at once.