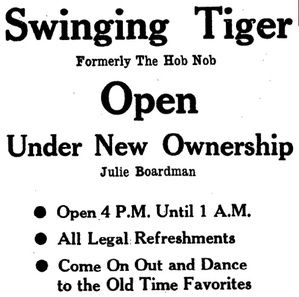 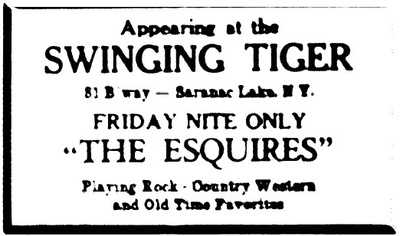 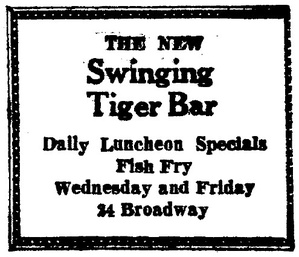 Adirondack Daily Enterprise, May 31, 1972 The Swinging Tiger was a bar and restaurant at 81 Broadway, the Potter Block, later at 24 Broadway, owned by Nancy Pandolfo, and Jewel Foley, that operated from 1965 until the early 1980s. They fielded a women's softball team.

SARANAC LAKE — Last night, a thief or thieves burglarized the Swinging Tiger Bar on Broadway and made off with a safe containing approximately $500 in cash, according to a part-owner of the establishment.

Mrs. Nancy Pandolfo, who co-owns the bar with Mrs. Jewel Foley, said this morning that upon opening the bar this morning, her husband, Al, discovered the safe containing the previous day's receipts and some additional cash was missing. Mrs. Pandolfo estimates the value of the safe to be approximately $400, making the total amount lost in the neighborhood of $900.

Village police, called to the scene to investigate, said the thief entered the building by forcing the rear, cellar door open. In addition to lifting the safe, police said extensive damage had been done to a cash register, which contained no money according to Mrs. Pandolfo.

Police were taking fingerprints from the doorway and cash register at 10:30 this morning.

Mrs. Pandolfo also said the Swinging Tiger has been burglarized on several previous occasions. A burglary last summer which netted $528 has remained unsolved.

The village board passed a resolution last night asking the State Alcoholic Beverage and Control Division "to carefully scrutinize the licensing of taverns and barrooms, etc. in Saranac Lake."

Trustee Chester Fobare who offered the resolution, added, "due to the fact that we are saturated with them now."

The action was taken at the request of the Franklin County Liquor Dealers Association, represented at the board meeting by Nancy Pandolfo, proprietor of the Swinging Tiger in Saranac Lake.

Mrs. Pandolfo said there are 18 restaurants and taverns, three clubs, and five stores with liquor licenses In addition, she pointed out, all grocery stores but one have licenses to sell malt liquors.

Any more licenses would compound the problems with liquor that already exist in the village and would also hurt the businesses that are already in existence, the dealers association feels.

The liquor dealers will also ask teachers, clergymen, and others to write to the ABC about limiting licenses.