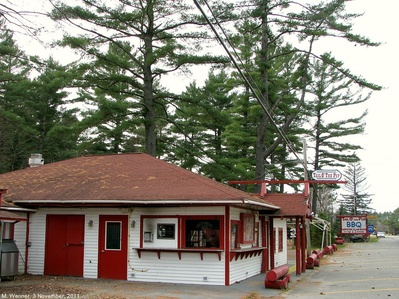 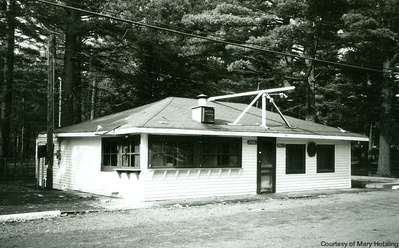 THE TAIL O' THE PUP, AT RAY Brook again open daily, 11 a.m. to midnight. Enjoy those good broiled Mexican Hots with delicious sauce at the coolest place on the Saranac-Placid-Road. At your service will be Wyona Buckley, Helen Muncil and Mary Branch.

The Tail o' the Pup is a ground-level roadside seasonal restaurant with novelty siding and outside service window as well as indoor seating, on the same property as the Evergreen Camps.

By JENNIFER COFFEY Enterprise Staff Writer LAKE PLACID - The North Elba Town Board can expect some opposition to the recently adopted live music ordinance, at the next board meeting Sept 8.

"The issue was raised because of live bands at the Tail O' the Pup, it was a continuous problem," Politi said.

"This ordinance wasn't created to stop people from playing music; it is to control the live bands," Politi said.

With the ordinance in place, the board now knows when and where there will be live performances and through the permit can control the times of performances.

"Obviously the law was passed too quickly without enough feedback or research if two people complaining was enough to constitute a law," said Ed Yanchitis, owner of the Tail O' the Pup.

The problem only occurs once a year, during lacrosse weekend, when the championship team stays at the Tail O' the Pup, according to Yanchitis. The team hires a live band and between 200 and 300 lacrosse players are there to listen to it.

Because the Evergreen cabins at the Tail O' the Pup are filled, many of the players fill up the cabins across the street at the Half-way Motel. Ironically, it is the owner of the Half-way Motel that made many of the complaints against the Tail O' the Pup. Wayne Bickford, the motel owner, was present at the public hearing for the ordinance, but could not be reached for comment.

Bela Ward, who lives directly across the street from the Tail O' the Pup, claims the noise has only slightly decreased since the ordinance has been passed.

"It has been going on for about 10 years," Ward said. "Even when there is no live bands they have a radio with speakers for music."

Ward and other residents approached the Town Board about the problem and they feel the town has taken care of the problem somewhat. "Basically he (Yanchitis) has no consideration for his neighbors," Ward said.

Discussion of the ordinance is on the agenda for the next North Elba meeting. [...]

by Emily Moody. [Includes a photo of the damaged building.]

RAY BROOK- A storm that blew through Ray Brook Monday afternoon dropped a state-owned pine tree on the roof of a favorite local barbeque stand. . . .

As the tree fell, it crossed and took down a main power line on Route 86 before puncturing the building's roof.

The damaged tin-roof ceiling was originally built in 1915 during the tuberculosis era in Saranac Lake.

Patients would walk from the sanatorium just around the corner, which is now a state prison.

Yanchitis said he will do whatever it takes to restore the landmark building to its original structure. . . .

Tail o' the Pup in Ray Brook under new ownership, to reopen Friday.