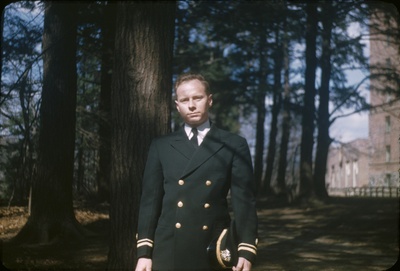 Children: "The boys and girls who attended the summer camp he founded in 1948 on Gilpin Bay, and in whose lives his legacy rests." From Adirondack Daily Enterprise, September 29, 2010.

Dr. A. Edward "Ted" Blackmar III, M.D. was the director of Camp Forestcraft on Upper Saranac Lake since c. 1949.

Ted graduated from Hamilton College and New York Medical School, and practiced as resident physician at the Peddie and Lawrenceville schools in central New Jersey. In 1973, he retired to Camp Forestcraft on Upper Saranac Lake. He served in the Navy during World War II and in the Korean War as medical officer with the 1st Marine Division.

His early visits to the Adirondacks were at Lake Clear Inn and where he became close friends with year-round residents, Ted and Gertrude Peete and the William Wardners. Ted's grandfather wrote a diary of his experiences in the Great North Woods in 1870 when he was 18; a copy is in the Saranac Lake Free Library's Adirondack Room.

Ted hiked in Patagonia, the European Alps, New Zealand, the High Sierras, and in the Nepalese Himalayas and made more than 30 canoe trips in Canada with his camp groups.

His ashes are in the Harrietstown Cemetery.

Dr. Blackmar Will Be Lions Speaker

He will tell of a rnountain climbing expedition in which he participated in Nepal, and will show color slides of the Himalayas, "rooftop of the world", in a region which took three and a weeks of hiking to reach.

After reading Bill McLaughlin's letter to the editor published in the April 30th, 1981 issue of the Adirondack Daily Enterprise I would like to contribute another point of view. As a background for my thoughts on these matters I would like to point out that I have been a full time resident of Santa Clara township for seven years and a tax-payer for thirty-three; I am a fisherman and a hunter, although I now hunt mostly with a camera. I have been a licensed guide and have operated a wilderness program for young people for thirty-two summers. My first trip over the Seven Carries of the St. Regis Pond area was in 1926, I also climbed my first Adirondack peak that summer. I still climb extensively and carry my canoe or guide boat to St. Regis Pond and Fish Pond several times a year.

As a physician and as a camp director I have developed strong feelings against the 'Big Brother' policies which the New York State bureaucracy is increasingly imposing on our personal and public activities. I feel that much of their role as 'protector' of the citizenry is ill-advised and unnecessarily destructive of individual freedom and development. On the other hand I feel that the government has a significant responsibility to protect the property purchased by state funds for state park lands. Such protection is in the interest of all citizens both living and to be born. A policy must be established and carried out with only secondary regard to individual interests. The APA has been given the responsibility of protecting the quality of the Adirondack Park for the people of New York State. The Department of Environmental Conservation is a more active agency in protecting the quality. In the discharge of the constitutional mandates there must be conflicts with individual interests. Unfortunately in the early days of the APA its agents often used their authority in a rather high-handed way which stirred up a hornet's nest of outraged citizens.

As a first hand observer of the Adirondack scene for more than half a century I recognize the absolute necessity of governmental control of the Adirondack Park if the wilderness character of the park is to be protected from destruction by private interests. Having run my wilderness program through two generations I am acutely aware of the tremendous psychological importance of wilderness in the lives of young people. Wilderness provides the realization that the Earth can be a good place to live in spite of the blight of urbanization and commercialization. The need to set aside a region such as the Adirondacks was clearly recognized a century ago by a number of foresighted people who devoted their energies to setting up the preserve before it was too late. They recognized the threat of man's destructive activities on the wilderness even before it was so tremendously enhanced and accelerated by the gasoline engine. These people should have our eternal gratitude, because without the policy of public ownership commercial development would be the alternative. Such development tends to eliminate public access and to convert forest and water resources to commercial uses which would be highly destructive to the fragile ecological balance of the Adirondack region. The state government has been given a constitutional mandate to preserve the park as a wilderness for the benefit of all people of the state both now and in the future. To me this is one of the most mature and significant pieces of state legislation ever proposed and carried out.

The definition of 'wilderness' is simple: it means land unchanged by the hand of man. Perhaps there are small pockets of true wilderness left in the Adirondacks, but they are very few. Actually the 'wilderness' of the Adirondacks has been well worked over and consists of hundreds of thousands of acres of uninhabited forested land belong to the state. It is the state's responsibility to preserve this land in a relative state of wilderness for all to enjoy. Almost nowhere in the state preserve are people forbidden access, including mountain tops and waters. Where certain usages become destructive to the wilderness character of the area the state must restrict these specific usages. These restrictions include camping above certain altitudes, use of gasoline propelled boats and vehicles in wilderness areas and the maintenance and storage of private equipment and facilities on state land. As an intensive user of state land I applaud and support all the restrictions and regulations imposed by the conservation agencies, including those which interfere with the freedom of use which I have personally been accustomed to.

SARANAC LAKE — A photographic show by Ted Blackmar is on display in the Cantwell Community Room of the Saranac Lake Free Library through the month of April.

The show, entitled "Guideboats and Guideboating," depicts Blackmar's love for the craft as well as for the sport. In 1954, he purchased his first guideboat from boatmaker Willard Hanmer for $300. He has won two Hanmer guideboat races with it and has travelled hundreds of miles annually on Adirondack waters.

Blackmar has owned and operated Camp Forestcraft on Gilpin Bay, Upper Saranac Lake, since 1948. The camp affords small groups of teenagers the opportunity to know intimately the wonders of the Adirondack backcountry through hiking, backpacking, and travel by canoe and guideboat.

Blackmar began color photography in 1949, and still does his own developing and printing in his kitchen.

Ted Blackmar of Upper Saranac Lake will share his slides from a trip to the Yukon and Inside Passage Wednesday, March 27, at 1 pm [at the VIC] as part of the Arm chair Traveler Series. Clear, sunny weather and spectacular scenery combine to make Blackmar's slides of the 1995 trip an outstanding experience.

Born in Scarsdale on Jan. 16, 1922, he was the only son of Abel Edward and Dorothy (Bernard) Blackmar Jr. Ted graduated from Hamilton College and New York Medical School, practicing as resident physician at the Peddie and Lawrenceville schools in central New Jersey until he retired to his camp in the Adirondack Mountains in 1973. Ted served in the Navy during World War II and in the Korean War as medical officer with the 1st Marine Division on the front lines as well as at the Portsmouth Naval Hospital.

The Adirondack Mountains were the light of Ted's life. Unmarried, his children were many-the boys and girls who attended the summer camp he founded in 1948 on Gilpin Bay, and in whose lives his legacy rests. Camp Forestcraft, a unique outdoor camp and family resort, offered children 12 through 16 years of age the opportunity to make decisions for themselves. There was no regimen such as archery, crafts, etc., but weekly camping trips into the woods, the mountains, lakes, and rivers Ted knew and loved so well were organized by the campers and their counselors. Campers, too, were expected to contribute to the running of the camp through work assignments.  Tributes from former campers are many, and one local gentleman who is a former camper wrote, "You are a champ, Ted, and you mean the world to me...you have touched my life profoundly." Ted's daily "lectures" from before the fireplace following meals enlightened some and were soporific for others, but were always a source of wisdom from a man whose goal was to form young people into productive and ethical adults. Ted's love for the Adirondacks was nurtured during his early years at Lake Clear Inn and through his close friendships with year-round residents, Ted and Gertrude Peete and the Bill Wardners. Ted's Grandfather, at the age of 18 years in 1870, wrote a diary of his experiences in the Great North Woods, a copy of which is in the Saranac Lake Free Library's Adirondack Room.

A world traveler, Ted hiked in Patagonia, the European Alps, New Zealand, the High Sierras, five treks in the Nepalese Himalayas, and more, as well as more than 30 canoe trips in Canada with his camp groups. His color photographs and slides are vibrant depictions of landscapes throughout the world. In Nepal, he met his close friend, Mary Brumder, who predeceased him in 1999. Ted is survived by his sister, Polly Ohman, and her husband, Bengt, of Lake Clear. He is also survived by 11 nieces and nephews including Kinna Ohman of Goshen, Vt. and Peter Ohman of Bozeman, Mont. His sisters, Anne and Joan, predeceased him.