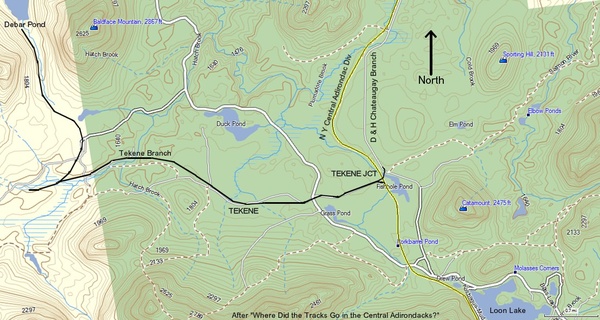 Tekene Branch Tekene Junction, located two miles northwest of Inman near the top of Loon Lake, was the site of the junction of the Tekene Branch with the tracks of the New York Central and the Chateaugay Railroad, which ran in parallel at that point only a tenth of a mile apart. The hamlet of Tekene was just over a mile west of the junction.

The fire fiend continues its work of destruction in the Adirondack region. Many fierce fires are reported, covering a wide area…

Plattsburgh Republican, April 7, 1906
…A number of cottages have been burned also a store on the Rockefeller preserve at Tekene Junction…

An Italian in the employ of Sundstrom & Stratton was run over by the cars on Saturday afternoon at Tekene Junction, where a force of men have been engaged in widening the gauge of the branch running to the Rockefeller preserve. One of his legs was badly mangled, and he lived only a short time after being taken to the military hospital at Plattsburgh. This is the third accident of the kind in three days

RUN INTO BY PASSENGER TRAIN

Donato Di Donato an Italian laborer, yesterday forenoon about 11:45 met with injuries which will, in all probability prove fatal. The man, was was working at Tekene Junction, was walking along the New York Central tracks and was struck on the side of the head by the engine of a passenger train traveling about 45 miles an hour.

The injured man,was brought to this city last evening and taken to the hospital at Plattsburgh Barracks for treatment, but there is little hope of his recovery.

One of the quickest pieced of concrete walk ever done in New York state by hand labor is nearly completed at Tekene Junction, one mile east of Loon Lake. The walk on the abutments for the bridge which will span the New York Central tracks, required 3,000 yards of concrete. It was commenced about Nov. 1st, and is now ready for the D. & H. standard gauge trains which will run to the Rockefeller estate, about 7 1/2 miles from Tekene Junction. Sundstrom & Stratton, New York contractors, had the work in hand. James Dalton of Chicago has had charge of the work at this place, and his energetic management is largely responsible for the thoroughness and expediency with which the work was carried on.

Delaware & Hudson Railroad trains will now be able to run from Tekene Junction to the ROCKEFELLER preserve without interfering with the New York Central trains, as the D. & H. people have constructed a bridge over the N. Y. C. road and laid tracks for this branch.

Castadino Testoro, an Italian in the employ of Sumdstrom & Stratton was fatally injured by being run over by a train on the main line of the Chateaugay railroad about one o'clock Saturday afternoon. Testoro was one of a force of men engaged in widening the gauge of the branch at Tekene Junction and was in the act of walking across the main line when run down. He was brought to this city on the evening train and taken to the hospital at Plattsburgh Barracks, where Dr. W. S. Buck, assisted by Dr. Woodbury, assistant surgeon, U. S. A.. amputated the left leg, which was terribly mangled, from, the foot to the knee. The operation was successful, bat the man was so weak from the loss of blood prior to the operation that he died about 11 o'clock that night. He had two sons at work on the same job with him.

Of all the ghost villages in the Adirondacks one that revives memories most vividly among the old timers is Tekene, two miles north of Loon Lake.

Tekene, a few weeks ago just brush covered area with seven crumbling weed grown foundations, lives again. It is the site of a temporary CCC camp. Here are sleeping tents, mess, hall, infirmary, kitchen, tool shack and officers quarters. The CCC outfit is from the main camp at Barnum Pond and is doing some road building and trail cutting.

Tekene is on the D. and H. property but is leased by E. M. Merrill as a game preserve. It is remembered as the center of one of the Adirondack's leading charcoal industries in the dim past.

Along the banks of nearby Tekene Brook one can still see the ruins of old beehive like charcoal kilns. These were made of brick and built in the shape of big mounds. Twelve of these were operated for many years at Tekene and the little settlement housed the men who tended the pits.

The charcoal industry thrived before the big timber was cut off. Wood was cheap and there was plenty of it. The kilns were fired with sections of hard wood and millions of feet of fine timber went up in smoke.

The kilns were airtight, or practically so and when the wood was turned into charcoal this product was much in demand for firing furnaces to melt the iron ore mined throughout the Northern Adirondacks. It was cheap fuel and gave a quick intense heat.

Old timers remember the kilns as mounds that glowed in the night. They were so hot that the bricks looked like living mounds of gold by starlight.

A branch railroad ran into Tekene as the charcoal was shipped out in box cars. The rails are gone but the old road bed is still visible.

Not far away is Tekene Junction, where the D. and H. and New York Central tracks cross. Here there was once a railroad station and several homes but these have long since crumbled and returned to the soil whence they sprang.

The oldest section of railroad track crossing the Adirondack blue line was taken out of service by the D. and H. railroad company Wednesday, when the company's trains began to use the New York Central right-of-way over the 22.1 mile stretch between Plumadore and Saranac Lake. The old track was used by one train daily in each direction.

The tracks, which are expected to be removed during the coming spring and summer, are laid over the bed of the original narrow gauge railroad constructed in 1887 by the Chateaugay railroad line. The road was first built from South Junction as far as Standish and later extended to Loon Lake and finally to Saranac Lake, where the first train arrived on Dec. 5, 1887.

The railroad section was in use for more than a half century. The Chateaugay line was built by the State of New York and soon was sold to Smith M. Weed of Plattsburgh. At the time of its construction, it was subjected to virulent attacks as leading to the depletion of the Adirondack timber supply and the ruination of the natural beauty of the mountain country.

The application for the change was filed with the Interstate Commerce Commission on June 18, 1940. It listed the reasons for giving up the right-of-way, on economic grounds and also to wipe out the duplication of rights of way. The only significant effect of the change will be the loss of $5,000 annually in taxes by the town of Franklin, Franklin county.

The D. and H. now operates only one train daily to Saranac Lake and return. The change has brought about the elimination of the flag stops at Vermontville and Bloomingdale. Travelers from Plattsburgh hereafter will pass through Rainbow Lake, Gabriels and Lake Clear Junction.

Of the 22.1 miles of railroad now abandoned, one section in particular— the four-mile stretch between Plumadore and Loon Lake, is one to bring pleasant reminiscence to many D. and H. engineers, firemen, and trainmen. This section of D. and H. tracks ran parallel with the New York Central, only a few hundred feet separating the two. Many stories are told of the “races” that were held there between the “rival” train crews.

The abandoning of the D. and H. section of tracks in this particular area also will mark the passing of Tekene Junction, which, in the heydey of lumbering, joined the Chateaugay railroad after passing over the New York Central from the west, in which direction the Tekene line ran for several miles into the East mountain sector.

However, the passing of the railroad line, will mean much to these hunters in another sense. Walking from Loon Lake station or from the Plumadore end, they will be able to walk the railroad bed without counting railroad ties.

The change in which the D. and H. will run its trains over the New York Central line will involve a considerable saving in maintenance for the D. and H., and it is not impossible that other similar changes will be permitted in the years to come.

…Loon Lake Station (Inman) was a junction of two rail lines. It was here that the Adirondack and St. Lawrence Railroad (later New York Central Branch) and the Chateaugay Branch of the Delaware and Hudson, met for exchange of passengers bound for the two lines ran parallel for several miles, sometimes only a few yards separating the railroad beds…

At Tekene Junction, a stop along the parallel line, stops often were made to take on carloads of lumber and charcoal, a product of the area before the turn of the century.

Lumbering operations were carried on in that sector by the Brooklyn Cooperage Co., which maintained a narrow-gauge line into the Loon Lake section in an area that long since has been known as Merrills Preserve.

It was on the outskirts of this preserve that numerous charcoal kilns were operated for many years.

The D&H section of this Adirondack line was abandoned some years ago. The sole service into this sector from the east today is by highway, most of it improved after remaining in a state of disrepair for many years.

All communities before the turn of the century had their favorite accomodations for transients, most of whom were commercial travelers.

Few of these early establishments have .survived the era of progress.