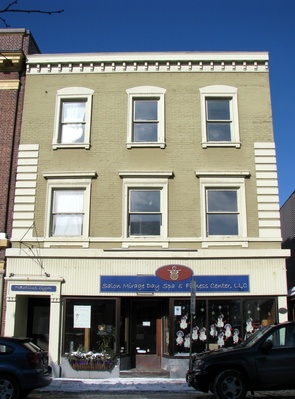 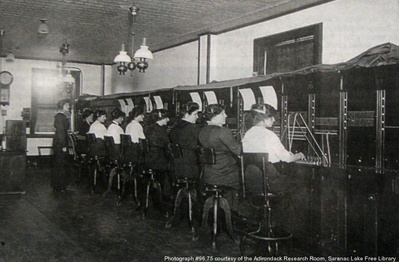 In the 1870s and 80s, Milo and Kate Miller sold approximately one acre from the northern part of their Main Street holdings to two men whose surname was Reynolds. Ransom Reynolds purchased the southern 7/10 acre in August, 1872, for $350; and in November, 1881, Reuben R. Reynolds paid $297 for the northern 1/4 acre. These adjacent lots ran from the middle of Main St. to the east bank of the Saranac River and, eventually, became the site of the group of brick buildings at the center of the arc of Main Street's west wall. Those buildings, numbers 56, 60, 68, and 70, have a story that intriguingly intermingles the lives of photographers, architects, bankers, and the Adirondacks’ most famous historian.

One month before Haase and Saussenthaler bought the northern part of the Ransom Reynolds lot from Anna Brown, Reuben and Ida Reynolds sold their Main Street property to the Adirondack National Bank. Two months later, October, 1906, the bank sold the southern part of this acquisition to the Hudson River Telephone Company.

According to Donaldson, the first telephone service in Saranac Lake was prior to 1893 when J. M. Bull "installed a primitive switchboard in his store" at 18 Main St. In 1893, this was "taken over by Joseph Merkel and Frank M. Jackson who moved it to 91 Main Street. In 1897, they sold out to the Franklin Telegraph and Telephone Co., which had been organized by local merchants to provide better and more extended service. This lasted until 1903, when it was bought by the Hudson River Telephone Company of Albany.

In June, 1909, Max Harold Westhoff, architect of the firm of Coulter, Westhoff, and Distin, purchased the Hudson River Telephone Co. lot, upon which stood the brand new Telephone Exchange Building. What Westhoff's down payment was is not known, but he took out a mortgage for $5,000. Interestingly, two months earlier, he had entered into a 20 year lease agreement with the former owner whereby KKS Hudson River Telephone would pay (for basement, second, and third floor space) $1500 annually for the first ten years, $1800 annually for the next five years, and $1950 annually for the last five years, bringing Westhoff a cozy $33,750.

It is possible that Hudson River Telephone had owned the land only and that Westhoff had designed and built the building and then bought the land under it.

In May, 1921, the building and lot was transferred to Clinton J. Ayres, a real estate broker, who sold it in September of that year to William F. and Josephine Cheeseman and William F. Kollecker.

William Cheeseman had been a successful merchant and real estate developer in Lake Placid since the turn of the century. He built a lovely building on Main St. there and in it operated a "novelty" business.

Probably around 1902-03, Mr. Cheeseman, at a Lake Placid barbershop, overheard a young man asking the barber about employment opportunities. He approached the young man and talked with him. As it turned out, the young man had photographic experience and Cheeseman had a photo studio and darkroom in his store. So William F. Cheeseman offered William F. Kollecker a job.

Kollecker had come to Saranac Lake in 1896 an ill man, and he was still far from well when he began his employ at Cheeseman's in Lake Placid. Under the care of Josephine Cheeseman, however, he strengthened. By 1904, he was healthy enough and, thanks to his work with Mr. Cheeseman, experienced enough to be ready to open his own shop and studio.

The Cheesemans, to whom the aspiring photographer had become as close as a son, loaned Kollecker $200 to get him started in a tiny storefront at 71 Main St. in Saranac Lake and on his way to becoming the most successful and prolific photographer in this village's history.

By 1921, William Cheeseman had had a less than profitable experience in the Florida land market. Without Kollecker as a partner, the Cheesemans might not have been able to have purchased the Exchange and opened a shop therein. Through this transaction, Kollecker was able to help his old friends as they had helped him.

By 1923, William Cheeseman's son, Clyde, was of an age to want a business of his own. So, in that year, his father and Kollecker turned the storefront over to him. This he operated as an outlet for a complete line of art needlework supplies and for Victrolas and Victor Records until the Exchange was sold, July 1925, to the Northern New York Telephone Company, which had absorbed Hudson River Telephone.

The storefront was then leased briefly to a man named Walsh who ran an apparel shop there, but soon the telephone company took that space for its offices; and the Exchange became exclusively a telephone building for nearly the next four decades.

In May, 1964, New York Telephone, which in its turn had absorbed Northern New York Telephone (1932), moved to a new building on Church Street and sold the Main St. property to William W. Mansion of Saranac Lake. He was the first of seven owners in a period of sixteen years.

The next owner was Margaret S. Howard of Annapolis, Maryland. Under the stewardship of her daughter, son-in-law, and granddaughter-Joan, Elliott, and Margaret Verner - the Exchange experienced something of a renaissance.

They upgraded the facade after it had been stripped of its finery and then allowed to deteriorate for sixteen years. The large basement was rented to Noonmark Natural and Specialty Foods, one of the only businesses to fully utilize the direct, rear access potential of the Main Street buildings, and a business unique in the Adirondacks for its philosophy and the service and products it provided. The ground floor was occupied by the Verners’ Community Bookshop, the only full service, general bookstore in the village and one of only two in the region. The second floor was a 95-seat theatre with a projection booth. This space, the result of the vision and toil of many individuals and Elliott Verner's patience and encouragement, was regularly used by local acting companies and for Peter Lesser's Java Jive Coffeehouse, which featured area musicians and writers. As the only resource of its kind in a community of 5,500 people and 21 bars, the Second Floor Theatre was of inestimable value.

The third floor of the Exchange is a loft-style apartment.

Because of the telephone company's unique needs, the second and third stories of the Exchange can each be opened up into single, virtually unobstructed rooms. As such, they are the only true loft spaces in the district, and, perhaps, in the village.

The Exchange is three stories with a basement and small subbasement. It is steel frame with a brick exterior and a brick, stone, and poured concrete foundation. Front and rear windows are steel-frame sash with conspicuous relieving arches above most windows in the north and rear walls.

The most interesting structural feature of the Exchange is the suspended roof which allowed maximum usable space in the room below, a requirement of the telephone equipment that was housed there. Above the roof, running across the building from the upper edge of each sidewall, are three concrete-encased, steel beams, 10 inches wide and 20 inches deep. From each of these beams, a concrete-encased girder drops down through the roof into the crawlspace between it and the ceiling. These girders play the part of hangers upon which the internal superstructure depends. The big beams above the roof undoubtedly act not only as weight bearers, but to tie the building's side walls together as well.

The facade of the Exchange used to be more imposing than it is today. Presently, from the level of the second story sills to the level of the third story sills, there are twelve concrete facing slabs at the south front corner and twelve pairs wrapping around the north front corner. The lowest are twelve by twenty inches each and all above are nine by twenty with a single course of brick between each set. Originally, three, twenty-inch wide, ionic pilasters rose above each of the highest slabs with a fourth rising from pronounced brickwork ninety inches back along the north wall. Above the great scrolls of the ionic capitals there was a massive and dignified cornice.

Under the Mansion ownership, the cornice and pilasters were torn off, the top two feet of the front and front-north walls were covered with sheet metal, and the facade was painted red and white. This sad transformation was somewhat reversed in 1982 when the owners and tenants of the Exchange joined forces and resources with the expertise of contractor Richard Lyon. Deteriorating brickwork was refurbished, the facade was painted a pleasing and distinctive, delicate moss green and cream, and a new, albeit modest, cornice was installed. Once again, the 68 Main St. Exchange looks out from a face befitting the Berkeley Square Historic District.

The building served for a time as the home of Pendragon Theatre.

It is reported on reliable authority that W. F. Cheesman of Lake Placid and W. F. Kollecker of Saranac Lake have purchased the business block on Main street in Saranac Lake in which the shoe store of William Mulflur is situated. It is said that Mr. Mulflur has a lease upon the property that runs for another year.