Around the time of the 1920s, summer theatres — in tents and on more permanent stages — provided entertainment for the audiences and experience for up-and-coming actors in Saranac Lake.

During the summer of 1929, an inexperienced but ambitious young actress cut her acting chops in Saranac Lake with an acting troupe called the Adirondack Players. The venue was a tent theater in a field – now a parking lot – by the Saranac River. The actress went on to shine as a star in Hollywood, acting alongside the likes of Cary Grant, Alec Guinness and Natalie Wood. Few would have guessed that the young woman dutifully belting out dramatic screams night after night under the tent behind Main Street would go on to be nominated for four Academy Awards, would win the Tony Award for her work on the Broadway stage, and would become the actress with the most Golden Globe Awards for films (a record later tied by Meryl Streep). The actress was Rosalind Russell. 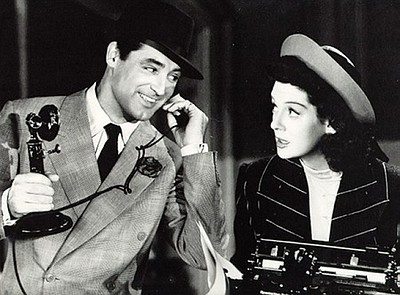 As the last physical vestige of Rosalind Russell's connection with the Village of Saranac Lake disappears in the rubble of the demolished Alpine Hotel a timely salute to the community emerges in the actress's biography written this year by Chris Chase and released by Random House.

After Miss Russell's death on Nov. 28 she was acclaimed as a comedienne of rare talent. Her career began in 1929 after she took up residence in the Alpine Hotel.

Miss Russell's professional acting career actually began in back of the Main Street bank. In retrospect she was highly complimentary in her assessment of the Saranac Lake Summer Theater and the part it played in giving her parts to play.

She was as green as spring dogwood after graduating from the American Academy of Dramatic Arts in New York City. She haunted producer's offices and theatrical agents and became discouraged — to the point of agreeing with her mother that she had NO future in the fanciful world of thespians, stage hands and tough directors.

A MAN named Dick Bartell who had seen her in a school production initially sought her out and offered her a job in summer stock. When Miss Russell said she wanted more than the $50 a week he tentatively offered her, he withdrew the offer. Her bluff had failed dismally, but she was not totally discouraged. She advanced to a wiser approach to selling her talents.

Still on the trail of employment she heard of a Forest Hills man who had a stock company in Saranac Lake. His name was Ed Casey. She sought him out. He liked her. He asked Miss Russell what she thought she was worth.

"A hundred and fifty dollars a week" she brazenly replied.

"Whew" he said, "my partner has a girl in mind who'd never cost what you cost. He thinks he could get her for $50 a week but I'm going to take the gamble."

She had a contract drawn up and signed by Mr. Casey before the opportunity cooled. Miss Russell was in possession of it when she stepped off the train at Saranac Lake in June for rehearsals.

The rest of the acting company was present to greet her. But a howl of anguish was heard over the hissing steam from the locomotive as she alighted. It was Mr. Casey's partner Dick Bartell pointing at her in disbelief and yelling- "That's the one. That's the girl I told you we could get for $30 a week. She's never worked anyplace in her life.

THE SHOCK eventually wore off and both partners realized that Roz Russell represented money in the bank. She could really act.

Miss Russell remembered clearly that the theatre was in a tent with stage and box office fashioned from birch bark. At the time, she was 19 years old and full of ambition. And village residents liked her from the very beginning.

She recalled that the Village of Saranac Lake was located in New York State's northern Adirondacks known for the sweetness of the cold mountain air and as a haven for tuberculosis sufferers.

Miss Russell pinned down the origin of National Variety Artists,1 which later expanded into the Will Rogers Memorial. She said that after the first World War, Edward Albee —the playwright's father, who was an admirer of Dr. Edward Livingston Trudeau — put together an association that built a hospital to take care of vaudevillians in Saranac Lake.

Mr. Casey had cured in the village and his love for the community had prompted him to form his theatre company in Saranac Lake.

Richard Bartell — still scratching his head and wondering how he and Mr. Casey, both seasoned entrepreneurs, had been out smarted by a young kid just out of acting school — handed her $30 every Friday night in cash from the box office receipts.

The $120 weekly balance was paid later in installments as business improved. She appeared in 26 plays over a period of 13 weeks during the summer of 1929.

THE ADIRONDACK Players programs of that year feature the slogan "A Bit of Broadway in the Mountains." Sam Edelberg supplied furs, Walton and Tousley provided light fixtures and hardware and A. Fortune and C. W. Parks loaned furniture props. The Adirondack Piano Company came up with an Orthophonic Victrola. These were among courtesy items constantly needed by the acting company.

Ros, as she was known to every one, rehearsed mornings played golf and swam in the afternoon and acted every night. She was often described as a tireless and willing performer. The leading man drank heavily, she said and could be absolutely smashed draped across a desk on stage. "And," she added "I'd be making fill in speeches like 'I know what you're thinking. You're thinking you don't love me. ..You're about to say you don't want to see me again.'" She utilized all sorts of dialogue to cover up and keep the play moving.

MISS RUSSELL became so handy at improvising she figured she could write a play herself. The leading man was replaced after a few weeks of stage stupor— which she was thankful for.

Miss Russell returned to Saranac Lake briefly in 1930 to re open the theatre for Mr. Casey and Mr. Bartell. As much as she liked the village, she thought it was high time to move on. She quickly moved into the big time where the rise to fame was sudden and spectacular. She was earning $300 a week in 1930 and appearing in company with Imogene Coco, Sterling Holloway and others whose names are still familiar today.

She never considered herself great in love scenes. And that may have been a reason for the development of her flair for comedy. She admitted, when making movies in 1933, that she was no more convincing in such scenes in Hollywood than she had been in Saranac Lake. I'd be giggling and begging the leading man to take his elbow out of my stomach and quit bending my head back like that, she said.

The only man who could make a love scene, she claimed, was Clark Gable. He was born graceful and he knew what to do with his feet she said. When he took a hold of you therewas no fooling around.

SOME OF the characters she portrayed for the Adirondack Players in the tent theatre were Ana Silvan in "Mv Son". Diana Devereux in "Jonsey" and Mabel Bumsted in "Broken Dishes." She also had parts in "Nancy's Private Affair", "Loose Ankles" and "Salt Water". Her leading man Phil Van Zandt later gained considerable fame on Broadway.

Miss Russell was the logical candidate for the first woman President of the United States according to Brooks Atkinson the New York Times theatre critic. "She makes the whole city wonderful and she will make the whole country wonderful when she is elected," he wrote.

Saranac Lake contributed indirectly to the talent and charisma that became Rosalind Russell's stock and trade. And the village always felt Justified in taking a little bow in her behalf—it still does.

Plans for opening the 1929 season of the Adirondack Players, outdoor summer stock organization at this resort, were announced today by Edward Casey, one of the owners and manager of the company, who arrived from New York City to take charge of preliminary arrangements.

A new tent, made to order for the theatre, is to arrive soon, and members of the company will be here shortly to start rehearsals for the opening on Monday, June 10. The theatre, which will be in its third season, is located on a large lot at the rear of the Jenkins building, 54-58 Main street, and has proven popular means of entertainment for Adirondack vacationists from a wide region.

Mr. Casey announced that he now [???] a well known Broadway actor, who has purchased the interest of Ralph Dorr, juvenile lead of the players for the past two years.

Mr. Dorr, who has always been popular with Saranac Lake audiences, will continue in his former capacity as a member of the cast. Mr. Bartell, who has appeared on Broadway in such plays as "Mary the Third", "Accused", and "Is Zat So", will also be one of the leading members of the company.

As leading man Mr. Casey has engaged Jerry Lynch, who has gained much favor with metropolitan audiences and other players have been engaged after personal study during the past winter by the owners with the purpose of building up an even stronger company than that of former years. Mrs. Casey, the former Eleanor Andrus, whose home is in this resort, will again be in the cast after a successful season in New York.

The new tent will replace that in use for the past two years. It will be slightly longer than the old tent, and the seating capacity will be about seven hundred.

Mr. Casey also announced that he has virtually completed his program with a selection from the best plays of the past and current metropolitan season. Plays will be changed twice weekly.