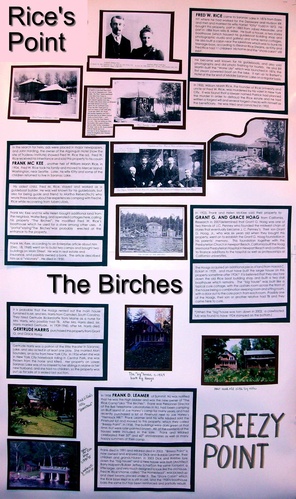 Rice's Point Display, by Bobbie Leamer, Shown at History Day 2008. Click on the image to enlarge the display

There was also a dance hall in Ray Brook called The Birches.

He went on to build two camps, and bought two buildings on Main Street in Saranac Lake. He dealt in real estate and insurance, and may have owned a bank. He died in 1930, described as a visionary. 1

In 1923, the McKees sold the property to Grant G. Hoag and his wife, Grace Hoag, from California. Grant G. Hoag was a friend of James Cash Penney, founder of the midwestern chain of stores that became J.C. Penney. Their son, Grant G. Hoag, Jr., who was six years old when they bought the property, later established the Grant G. Hoag Foundation in his parents' memory. 2

The Hoags acquired an additional piece of land from Harold C. Eckart in 1929, and built the larger house on this property after 1924. 3 They also tore down the old Rice boat house and built the present two stall boat house. The "big house" was built like a typical cure cottage, with the upstairs room across the front of the house serving as a combination sleeping room and sitting room, with a door to the cure porch from each room; this suggests that a member of the Hoag family had TB.

It appears that the Hoags rented the main house, furnished, to Mr. and Mrs. Harris, from Camden, South Carolina. They hired Gertrude Bickerstaffe, from Maine, as a nurse for Mrs. Harris, who may have had TB. After Mrs. Harris' death, Mr. Harris married Gertrude. In 1939-40, after Mr. Harris died, Gertrude Harris purchased the property from the estate.

Gertrude Harris was a patron of the little theater in Saranac Lake, and acted in at least one play performed there. She married later Alan Saunders, an actor from New York City. In 1956, she died when she was thrown from a horse she was riding in Central park, and the property was put up for sale at a sealed bid auction and sold, in 1958 to Frank D. Leamer, who renamed the property Breezy Point.

1. Adirondack Enterprise, December 18, 1968
2. The Grant G. Hoag Foundation, together with the Presbyterian Church i New Port Beach, California built the Hoag Memorial Presbyterian Hospital in Newport Beach, and continues to finance additions to the hospital, along with professorships at California Universities.
3. The date is suggested by the fact that, when the house was torn down in 2003, a clawfooted tub was found to have "1924" stamped on its bottom.