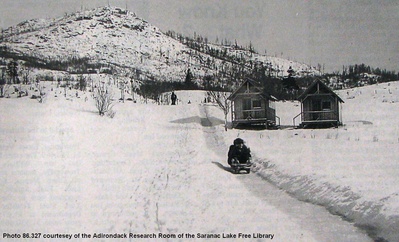 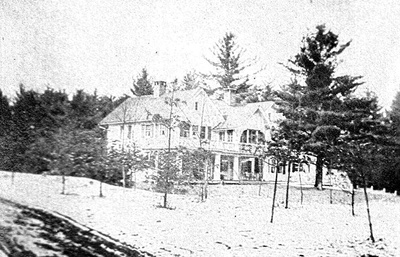 The Pines Club, c. 1910. The club was south of Moody Pond, near Pine Street. From a photograph album kept by Paul Ludwig Ott, courtesy of Kathy Ott Sader. The Pines is a sixteen acre tract of pine woods located near Mount Baker on the south side of Moody Pond. It was part of Jacob Moody's original purchase in 1819, and stayed in the Moody family until 1911, when it was sold to Edith R. Bucklin, who sold it to Walter Cluett and Alex Stanley in 1920. In 1927, the land was given to the T.B. Society; in 1943, the Society decided that the pines should be left standing as a memorial to Dr. Lawrason Brown. The property included a lodge and a barn that were razed in 1943. 1

Walter Cluett and Alex Stanley started the Pines Club, also known as the Moody Pond Sliding Club; it featured a bobsled run off of Mt. Baker and skating and curling on the ice. 23 During Prohibition, it became a speakeasy run by Jersey Joe Garbachio. "...the wealthy families of Cluett, Stanley and Col. Scott started a resort known as The Pines Club, which ceased abruptly following the mysterious death of a maid on the premises." 4

The Pines, a 15-acre stand of white pines between Pine street and Moody Pond, was deeded to the Saranac Lake Tuberculosis Society in 1937, the gift of Walter Cluett and Mrs. Alex Stanley. The old Pines Club was demolished and the SLVHA, successor to the TB Society, eventually dedicated the area as a park in memory of Dr. Lawrason Brown.

AGENTS SWOOP DOWN UPON SARANAC CLUB

The Pines, Once Rated as Most Exclusive, Scene of Prohi Raid

SARANAC LAKE, Sept. 6. — The Pines, at one time rated one of the most exclusive clubs in the Adirondacks, was raided this, afternoon by prohibition agents, who seized a store of beverages which they said ranged from grain alcohol to Italian vermouth.

Cora Mack was charged with possession in violation of the Volstead act, and was ordered to appear tomorrow morning before United States Commissioner George Utting In this village. The raid was made under authority of a search warrant issued, on complaint of Agent Arthur E. Byrnes.

The Pines was long reputed one of the smartest clubs in this section, where there are many exclusive organizations maintained by wealthy visitors. Recently its members have allowed the management to take tourists and entree, it is said, has not been so limited as in the past.

After Dr. Edward Livingston Trudeau established his practice in Saranac Lake and made a start in 1892 with the working girls curing in "Little Red" on the side of Mt. Pisgah, there came another famous personage named Robert Louis Stevenson, who stayed at the Baker Cottage in the year 1887, and wrote so the world could know that the only enjoyment he had in the miserable weather around the hamlet of Saranac Lake was in his act of skating on Moody Pond.