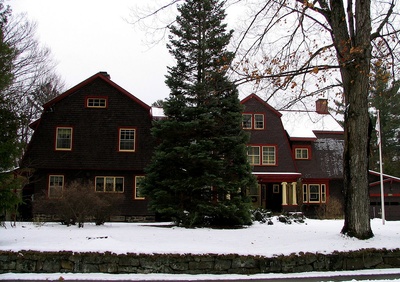 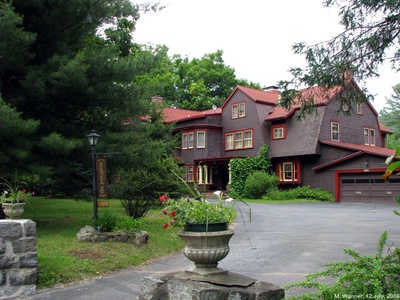 Other information: A Shingle style house built for Thomas Bailey Aldrich, author and editor of the Atlantic Monthly, who moved to Saranac Lake in 1901 with his tubercular son Charles. The Aldriches named it The Porcupine "because it had so many good points, and because it was occupied by a quill driver."

It was later the home of Alexander S. Cochran, a man of great inherited wealth, the founder of the Elizabethan Club at Yale; he died of T.B. in Saranac Lake on June 20, 1929, at age 55.

It was also the home and office of the ear, nose and throat specialist Dr. Francis X. Ipolyi from 1956 to 1977, and after him of Dr. William Forbes. The entry hall served as reception and waiting room, and the living room to the right was divided into several examination rooms. When the house, one of the largest in the village, was later converted to a bed-and-breakfast, the partitions were removed and the floor plan restored to its original configuration.

Mr. and Mrs. Connolly were the first to run it as a Bed and Breakfast followed by Anthony Dawson-Ellis, and later by Meg Amy.  The current owner, Frederick S. Mazzeo V is restoring the Porcupine to her former glory.

Thomas Bailey Aldrich (1836-1907), a magazine editor, also wrote short stories "in the so-called 'French manner'—a style marked by crisp, epigrammatic turns of phrase and surprise endings." His popularity and influence were enhanced by the autobiographical Story of a Bad Boy, whimsical essays in Ponkapog Papers, and by his career as editor of the Atlantic Monthly. 1 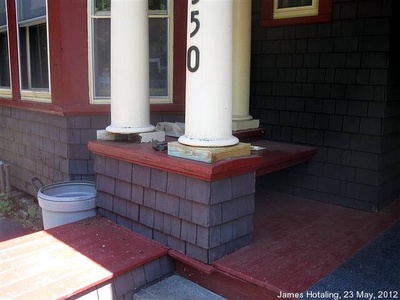 The column where the note was found. Found at The Porcupine on May 18, 2012, was a folded piece of builder's paper in the base of the far left hand column on the front porch, as the base was being replaced. Written on it in pencil is the following:

"Saranac Lake, Sept. 23rd 1902, This building built by Branch & Callanan. Foreman [illegible] Thomas This work done by W. P. Kennedy. finder of this will please make it known and oblige the writer WPK"

On the back of the paper is written:

Thanks to the former owner, Meg Amy, for "making it known"!