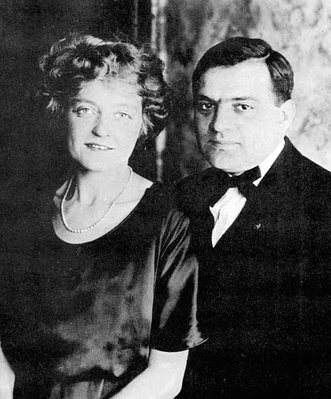 A brick at the Saranac laboratory has been dedicated  in the name of Thea LaGuardia by Historic Saranac Lake.

Thea LaGuardia was the wife of Fiorello LaGuardia, who some time after her death became New York City mayor.

Thea Almerigotti met Fiorello H. LaGuardia in 1915 while working as a dress designer in the garment district. Born in Trieste like LaGuardiaʼs mother, Thea was LaGuardiaʼs opposite in looks: She was tall and fair with blonde hair; he was short, with dark hair. They had a lengthy courtship, while Fiorello ran for Congress and served in World War I. They were married on March 8, 1919. He was 35 years old, she was 24.

In November of 1920 they had a daughter, Fioretta Thea, who died May 8, 1921. Thea contracted tuberculosis and came to Saranac Lake for the cure, staying at the Collins/Beattie Cottage on Park Avenue. LaGuardia visited her every third weekend until she was sent home in late November, just before her death at age 27.

On his Saturdays in Saranac Lake, Mr. LaGuardia would stop in for a shave and a chat at Carl D'Ambrisi's barbershop at 65 Broadway. Mr. D'Ambrisi had lost his own wife to the White Plague in 1916, and he and his sons knew from experience what the weekend visitor from the city was suffering.

At that time, the D'Ambrisis were living at 8 Circle Street, just around the corner from 76 Park Avenue. One day Mr. LaGuardia mentioned to Carl D'Ambrisi how his wife missed Italian cooking and how much she might appreciate some good spaghetti with meatballs once or twice a week. So every week at least once a week, the D'Ambrisis made an Italian dinner for Thea LaGuardia and brought it to 76 Park Avenue, that the Little Flower's wife might feel a little more at home. 1

Fioretta Thea LaGuardia, the year-old daughter of Major F. H. LaGuardia, President of the Board of Aldermen, died yesterday in Roosevelt Hospital of spinal meningitis. The child had been ill for some time. Mrs. LaGuardia has suffered a breakdown as the result of the strain of caring for the baby, and is under the care of a physician.

Wife of President of Board of Aldermen Had Recently Returned from Saranac Lake.

Mrs. Thea LaGuardia, wife of Major Fiorello LaGuardia, President of the Board of Aldermen, died last evening at her home, 1852 University Avenue, the Bronx. She had been in ill health for a year and recently returned home from Saranac Lake. With her at the time of her death was her husband and her sister, Mrs. Maria Parasi of Hartford, Conn. Mrs. LaGuardia was Thea Almerigotti. She was horn in Trieste twenty-six years ago. She came to this country twelve years ago. She was married to Major LaGuardia on March 3, 1929, by Mgr. Ferranti, in the office of the Cathedral College, 462 Madison Avenue. They had one child, a girl, who died.

Major LaGuardia won his title while serving on the Italian front with the American Flying Force. He wears the Italian War Cross and the Order of a Knight Commander of the Crown of Italy. They were bestowed for valiant services while attached to night and day bombing squadrons. He served as a member of the Sixty-fifth and Sixty-sixth Congresses, and prior to that he was in the consular service and was an interpreter at Ellis Island.